Look Up at the Fiber Optics Above You 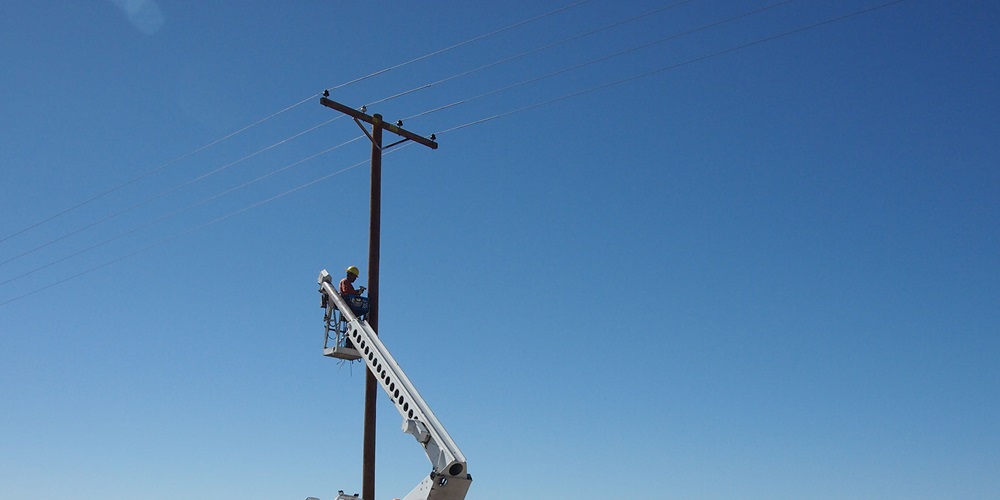 Last time, I wrote about what you can learn from keeping your eyes open, and I continue on that theme this month. This time, we’re looking up and discussing aerial fiber optic cable.

Some years ago, in the Fiber Optics Association (FOA) Newsletter, we ran a contest looking for the messiest aerial cables in the world. One of our instructors won the contest with this photo from his home, Cebu City in the Philippines.

I thought that was really terrible until I looked around here in my backyard more carefully. This example is in Santa Monica, Calif., at the intersection of a major residential street and an alley down the middle of the block behind the building where I live.

On the pole is the crossing of two messengers. Going off to the right down the alley, we have hardline coaxial from CATV, fiber for the CATV hybrid fiber-coaxial network, a telco copper cable and another cable with distribution points for prefab drop cables for a gigabit passive optical network (GPON) FiOS fiber to the home network. Down the street, we have similar cables plus a big multipair copper telephone cable. That copper cable is so old that it’s pressurized with a tank of nitrogen down the street to prevent moisture problems. And above those low voltage cables, we have several electrical distribution cables.

The fascinating thing to me is the seven hanging storage loops of excess fiber and three more loops of excess cable on what are usually called “snowshoe fittings.” At one point to the left, at least 10 cables are bundled together.

A few blocks away, we have these cables, including six fiber splice closures, one copper closure and one CATV amplifier. And there is more excess cable on two sets of snowshoe fittings.

On the other side of town, right across from the CATV office, I looked up to see this. It must be 300–400 meters of fiber optic cable just hanging up there. I suppose whoever left it there had a simple justification. Perhaps they were coming back shortly and lashing it farther down the street. I hope so.

But I don't see this only in my neighborhood. Below is a photograph I took of a utility pole in Newton, Mass., a few years ago. Yes, that is a 4-foot diameter wooden reel of fiber—almost empty—hanging on a pole about 10 feet off the ground. ­

Now this one may have an excuse. Hurricane Sandy hit this area hard, damaging much of the aerial cable in the neighborhood and breaking several poles. This could have been a temporary place to store the cable (it’s certainly hard to steal or damage this way), but a friend told me it had been there for several months.

(If anyone reading this lives nearby, please go to the corner of Bainbridge Rd. and Chestnut Ridge Rd. in Newton, and let me know if this is still there. I sure hope not!)

Now, if all of these photos have you shaking your head, I have made my point. Whenever anyone talks about fiber optic cable installation, they discuss how hard it is to install cable underground compared to aerial installations. Well, that isn't necessarily true. Many of the utility poles I see have been around for many years and have several generations of cables.

These poles started life with either power cables—if an electrical utility owned them—or telephone cables—if a telco owned them. Over time, many more cables have been installed: copper phone cables, CATV coaxial, fiber for telcos and CATV, more fiber and maybe even more fiber. With each new cable, the pole gets more crowded, and if the installers are not careful, it becomes more cluttered and messy. Imagine what it’s like to install yet another cable on some of these poles.

It’s equivalent to the crowding that occurs in conduit after more and more cables are installed.

To install a new cable on one of these poles often requires moving other cables around to fit new hardware and cables. This is a process known in the trade as “make ready.” It can be a very tedious process with potential to damage not only other cables but the pole itself.

You might have heard the term “make ready” from the news. It was used in cities Like Nashville, Tenn., and Louisville, Ky., where an internet service provider (ISP) wanted to install cables on a competitor's poles. The owner of the poles (a telco) wanted to prepare the poles themselves to protect their cables. The ISP wanted their contractors to move all of the cables at once so the project could move faster. The city passed an ordinance allowing for “one touch make ready,” and the pole owner sued to protect their property. Missing in the ordinance was any requirement for the qualifications and approval of the contractors, a major issue when some ISPs appear to have been hiring gardeners to install underground fiber optic cables in other cities.

Not every pole is a problem. Over the last few years I have been working with a rural electrical cooperative in Anza, Calif., that is building a fiber network we call “fiber to the ranch.” This coop has 4,000 customers spread out over 500 square miles. They are well along on building their GPON fiber optic system because they did not have these problems. They did not even have phone lines on most of their poles, so they had to install a messenger wire before they could start installing fiber.

Once you start placing cable, it’s important to follow directions. The installer shown below pulling cable off of a reel before lashing it to the cables already on the poles was fired shortly after I took this photograph. It seems he continued to ignore his supervisor’s directions. He was told that each end of the cable needed enough extra cable to pull down the pole, into a vault and then into a splicing truck. He kept leaving just enough cable to reach the ground.

Aerial installations have other issues also. Safety is the big one, working on ladders or bucket trucks. Maybe some workers still climb poles with gaffs (spikes). Sometimes, you need to get close to electrical wires. At least most fiber splicing is done on the ground, like this worker on a cable just down the block from the first Santa Monica photo above.

Don’t assume aerial installation is easier, simpler or cheaper. Like everything else, especially when it comes to fiber installation, you need properly trained techs, experienced supervision, proper equipment, and a properly designed cable plant to start with.