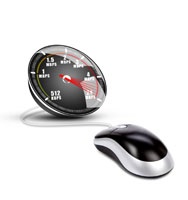 From the seeds of imagination to the lives of millions, every lasting invention has traveled a similar course.

It may be hard to believe, but only a few decades ago, the Internet was just an idea. In a short time, with the help of a few pioneering scientists, it morphed into a telecommunications phenomenon that transformed the world. Now, nearly one-quarter of the world’s population uses the Internet in some fashion.

It’s no wonder that people have come to rely on it. According to the results of a survey released recently by the Utica, N.Y.-based polling firm, Zogby International, people don’t just like the Internet. They are hooked on it. It has become an essential tool in our everyday lives.
The poll found that 28 percent of those surveyed pointed to broadband Internet as the one technology they can’t live without. The study polled 1,900 adults in December 2010.

Respondents identified other must-haves. Interestingly, they are all Internet-based, such as e-mail, which came in second at 18 percent. The social networking site, Facebook, was lower on the overall list at only 3 percent.

The survey also asked respondents which technology they believed had the greatest impact on society over the past 10 years. At 24 percent, high-speed Internet came in first again, followed closely by Facebook at 22 percent. Google came in third at 10 percent.

Looking to the future, clearly the expectation is that home-based digital technology will continue to play a part. Thirty-six percent of the respondents think virtual reality will make its way into home entertainment by the end of this decade.