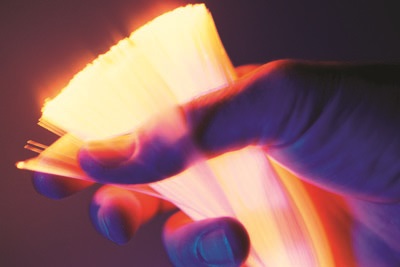 From Copper to Fiber Optics

IN THE PAST, WHEN I REVIEWED THE FIBER-COPPER BATTLE, the summary was the same: copper is cheaper, more familiar to most buyers and continues to dominate the cabling world. The future for fiber looked bright, so maybe there was reason for optimism. This year, just maybe, the copper dominance has been weakened, perhaps enough for fiber proponents to be truly optimistic about the future.

The most startling turn of events is that telephone companies have decided that the time is finally right for installing fiber to the home (FTTH). FTTH installation is being driven by several factors. These include new technology, lower installation costs, a desire to offer new revenue-enhancing services such as digital television and, perhaps most importantly, an urgent need to change the public perception that landlines are obsolete, replaced by cell phones, Wi-Fi and cable modems.

With FTTH now being installed in new housing developments in almost a thousand communities across the United States and fiber to the curb being installed in many other areas to overcome the distance limitations of DSL, the telcom commitment to fiber to the home is obvious. So fiber optics has, with the help of cell phones, completely overcome copper cabling’s dominance in the telephone network. It only took 25 years!

It seems each time the next-generation computer local area network (LAN) starts development, fiber optic proponents have renewed hope that the era of unshielded twisted pair (UTP) copper wiring is finally going to be over. And each time, copper comes through again, offering a solution that takes only a few months to undercut fiber prices and dampen spirits of the fiber-faithful.

The same hope was felt with the introduction of 10 Gigabit Ethernet (GbE). From a technological standpoint, the fiber advocates might have some real cause for their optimism. It has been four years since 10GbE became standard for fiber optics, and we are still waiting for a viable copper solution.

Why would the 10GbE solution, called 10Gbase-T, take so long? Like GbE, the development of a UTP solution required a coordinated development effort between network experts, cabling manufacturers and semiconductor companies. Once again, the currently available UTP cabling was inadequate for projected transmission solutions developed by the network experts, so new, higher performance cabling was needed, making Cat 6 obsolete before it was ever really needed. The “augmented” Cat 6 has higher frequency performance and is even bigger in diameter, as crosstalk between cables—not just pairs inside the cable—required increasing cable-jacket thickness.

Developing a “chip” solution for 10GbE has not been easy for semiconductor manufacturers either. The analog interface to the cabling requires lots of power to drive all four copper pairs at such high speed and the digital processing circuits needed for such high-speed transmission consume vast amounts of power. While fiber optic solutions for 10GbE consume about 2 watts (W) of power, 10Gbase-T transceivers consume up to 15W of power, creating potential heat problems in networking equipment. Another big problem seems to be in chip packaging, as the dense chip packages used for these devices can only handle 4 to 6W of power.

It’s a bit hard to understand why the copper companies have expended all this effort: 10GbE is mostly limited to applications in large corporate backbones, metropolitan networks, FTTH backbones and long-haul telephony that is being converted to Internet protocol (IP) over Ethernet. After more than five years of Gigabit Ethernet availability over UTP structured cabling, most desktop PCs still communicate at slower Ethernet standards. Sure, you can use a 10GbE copper solution in a computer room to connect servers and switches, but distances there are very short, a few meters, hardly justifying the millions of hours—and dollars—spent trying to take copper to the next level of structured cabling standards.

While fiber is the media of choice for network backbones, the connection to the desktop is still mostly over copper. UTP-rated Category 5, 5e or 6 can handle the typical desktop bandwidth easily. Users are disinclined to switch to fiber as long as copper still works, and the PCs they buy already have copper Ethernet ports. Users of applications that require gigabits to the desktop—such as the Los Angeles-based computer animation group my son works for—have already discovered fiber is the way to go.

However, more commercial and institutional users are finally understanding that a centralized-fiber LAN with all network electronics placed in one location can save considerable costs. The all-fiber LAN needs no electronics in a telecom closet and thereby reduces the costs associated with providing power, data-quality ground and air conditioning in every closet. Instead, only passive fiber connections, usually patch panels, are required to connect multifiber backbone cables to desktop drops.

Interestingly enough, FTTH has created a major new market for copper. Homes connected with fiber are candidates for complete structured cabling systems to allow multiple computers to share the high-speed connection provided by the fiber optics. Loma Linda, Calif., has amended its building codes to require structured cabling in every new home, and more cities are looking to do the same. With new home construction around 1 million homes per year, that is probably a lot larger market than connecting a few servers in computer rooms.

Like FTTH or 10GbE, other applications have embraced fiber optics for volume usage. Security surveillance cameras use fiber optics in most large buildings, since the remote cameras are too far from monitoring centers for coax cable. Many video camera manufacturers are now offering cameras with direct fiber connections, which do not require converters from coax to fiber. Many large screen monitors for sports arenas, casinos and advertising signs connect on fiber optic interfaces.

I recently did a consulting project for a company that designs and manufactures network monitoring and communications equipment to electrical utilities. This company offers fiber optic interfaces for virtually every product they make, since utilities use fiber optics around substations for managing power distribution because its all-dielectric nature makes it impervious to electromagnetic interference (EMI). The overall grid management is also usually done over fiber, with much of the network using optical power ground wire (OPGW), a special power cable that has fiber in the middle, another application made possible by fiber’s immunity to EMI. During research for this consulting project, I found that electrical utilities own 5 to 8 percent of all route-miles of fiber in the United States, often partnering with telecom companies to allow long-distance phone use on their rights-of-way.

Prices of fiber optic equipment continue to decrease, a function of greater market volume and new technology. The inexpensive lasers that were developed for GbE, called vertical cavity surface emitting lasers (VCSELs), are now said to be cheaper than the light emitting diodes (LEDs) that were commonly used for low-cost transmitters on multimode links. Other components such as fiber, cable and connectors also continue to decline in costs.

While the copper types have been trying to find a 10GbE solution using UTP, the fiber optic manufacturers have been quietly expanding their product lines and reducing prices. A quick Internet search found that media converters to allow connecting PCs to fiber optic cabling cost less than $80 for 100 MbE, typical for most desktop connections, and $250 for GbE. Even more surprising was a wireless access point with fiber interface for less than $90!

Meanwhile, the raw materials used in making copper wire, especially the copper, are increasing. Market forces in the copper industry, primarily developing countries’ needs for power cables, have caused copper prices to rise by 600 percent in the last three years—about 140 percent in the first half of 2006 alone. Some cable manufacturers warn their distributors and customers to check for current prices because changes are made often. Meanwhile, fiber has declined in cost until, as one market researcher said, “Fiber is cheaper than kite string and monofilament fishing line!”

Users no longer need to worry about finding trained, certified installers, either. Many schools teaching networking or telecommunications now include fiber optic training in their programs. The Fiber Optic Association (FOA), the professional society of fiber optics for which I currently serve as president, has about 150 schools teaching fiber optics and offering the FOA certifications (including many JATCs). FOA-approved schools have certified more than 18,000 installers in the last decade.

What many of us who work with fiber have been wishing for seems to have come true. Fiber optics looks like it has finally gone mainstream. Suggesting the substitution of fiber for copper cabling is no longer questionable and most users understand it may in fact save money. Whereas one often had to buy a copper-to-fiber converter to use fiber in the past, now equipment such as video cameras, network monitors and LAN switches with fiber ports are readily available and cost effective. These products are available from local distributors who already recognize that a fiber optic product is no longer a specialty item. Contractors are familiar with fiber optics and can handle installations. Maybe we won’t even need to write another article on this topic next year—it will be passé!  EC

HAYES is a VDV writer and trainer and the president of The Fiber Optic Association. Find him at www.jimhayes.com.