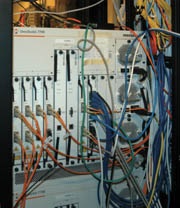 You have to admire the copper cabling people for their tenacity—they never give up. In spite of hearing for the last 15 years that copper has no future, they persist in developing new technology that allows copper, like the mythical Phoenix, to rise from the ashes as strong and viable as ever.

Consider their accomplishments by looking at the graph on page 111 that shows the relative bandwidths of fiber and copper cabling over the last two decades. When fiber arrived on the scene, its bandwidth was well ahead of copper twisted pair cabling, leading to its dominance in telephone applications. But as computer local area networking (LAN) grew to support the large base of installed PCs, UTP manufacturers developed technology—both cabling and electronics—that allowed it to meet LAN needs.

Today, both fiber and copper are in the midst of major advances in bandwidth capability. To support the next generation of LANs at 10 gigabits per second, multimode fiber has advanced to new levels to support laser-based systems and the copper industry is developing UTP cabling that will provide at least a three-fold increase in bandwidth. Astute readers will note, however, the graph shows that one generation of fiber optics has outlived four generations of UTP cabling.

The next generation of networks

When Ethernet, the dominant network technology, jumped from a data rate of 100 megabits per second to 1 gigabit per second (GbE), fiber had an easier time adapting, but it did not take UTP long to catch up. While GbE led to development of two new generations of copper cabling, the fiber manufacturers responded by bringing back a two-decade-old fiber design, originally designed for laser-based long distance telephone systems in the early days of fiber. This fiber could support more than twice the link length, but was incompatible with the earlier fibers.

Before the cabling manufacturers could take a breather, the Ethernet people were introducing the next generation of Ethernet running at an astounding 10 gigabits per second. The new laser-rated fiber was ready for 10 GbE, but the copper people were again put in a catch-up mode. Their new Category 6 was inadequate for 10 GbE, but they are responding by working on a new cable that will more than triple the bandwidth of Category 6. It is an extremely difficult goal, but reread the first paragraph and you will be able to predict the outcome.

Like most things in life, the decision whether to use fiber or copper often comes down to economics. At first, fiber cabling itself was significantly more expensive than copper. Today, installed costs of fiber and copper cabling are similar. Component and termination costs of fiber are slightly higher, but the high cost of testing copper and the poor yield of high bandwidth UTP (Category 6 often requires extensive rework to pass certification testing) at least give fiber cost parity.

One thing fiber will always suffer is the higher costs of fiber optic electronics. The equipment on a network—such as PCs and hubs—is inherently electronic devices that are directly compatible to copper cabling. Fiber, meanwhile, requires conversion to the optical domain, adding the costs of LEDs or lasers and appropriate drive electronics.

Fiber to the desk is hard to justify when every PC comes with a free UTP Ethernet port. Connecting any PC with fiber requires a media converter that adds about $100 to the PC plus a switch in the telecom closet that offers fiber ports, at another $75 to $100 per port. Justifying this expense is only possible if the user adopts a centralized fiber architecture that requires no equipment in a telecomm closet.

Fiber, of course, has always been the cabling of choice when adverse conditions arise: longer distances, areas of high electrical interference or installations where high security is required. Here, not only is fiber often the only solution, but the cost of fiber cabling and electronics is almost always lower than adapting copper cabling. For instance, even providing POTS (plain old telephone service) for distances over 3 miles is more expensive over copper wire than fiber, once the cost of adding repeaters and power to drive them is included. Ditto for LANs where distances exceed the standard 100 meters or frequent networking speed upgrades, such as in LAN backbones, is likely.

The cost of fiber

When I started teaching cabling to electrical contractors more than a decade ago, I got an education myself in what was involved in a complete cabling installation beyond the cabling itself. I learned about providing conditioned, uninterruptable power to telecomm closets, data-quality grounds to prevent ground loops and the requirements for year-round air conditioning to keep high-powered networking equipment cool in a tight telecomm closet.

After a while, it sunk in that there were numerous costs in equipping a telecomm closet. Fiber’s greater distance capability allowed one to place all the electronics and power in the computer room and requires only passive interconnects in the telecomm closet. Once you no longer required power, grounds and AC in every closet, the cost savings could offset the additional costs of converting to optical signals for transmission over optical fiber.

Using this assumption, the TIA’s Fiber Optic LAN Section (FOLS) has developed models of computer networks so users can compare the costs of a network based on using all UTP cabling, UTP to the desktop with a fiber optic backbone, or all fiber with a centralized fiber architecture. The biggest factor is the cost of the telecommcloset amortized over the number of users. In a typical scenario, the cost of an all-fiber network is comparable to the more common fiber backbone and copper to the desk solution.

Standards and the market

A big factor in UTP maintaining its dominance over fiber has been the TIA 568 networking standards. Written around the limitations of UTP cabling and AT&T’s century-old telephone infrastructure, 568 compliance limited users to directly replacing copper links with fiber, with the maximum 100m link length negating fiber’s advantages in distance capability when used in a centralized fiber network. The 568B revision is more fiber-friendly, with a separate section on fiber. Within the scope of 568B, fiber has become the cabling of choice in the majority of LAN backbones, connecting computer rooms to the telecom closets, but Category 5e remains the most popular choice to connect the desktop, with more than 95 percent of the market.

Since every cabling manufacturer offers both fiber and copper cabling solutions and all sell about 20 times more copper products as fiber, they are obviously going to promote the product that produces the greater sales—and that is copper. But they also realize that fiber is going to be the ultimate solution, so they are all investing in fiber technology to be able to provide the right product when the time comes.

Myths die hard. A few years ago, I threatened an editor with a severe thrashing with a fiber optic cable if he ever published another article that started along the lines of, “We all know fiber is made of glass, so it’s fragile, plus its hard to terminate and expensive.” We have already dealt with the cost issue. When I teach fiber courses, I debunk the fragile part by asking my students what makes their fishing and ski boats so strong? Of course, it’s the glass fibers in the plastic resin. And then I tie a fiber optic cable in knots while shining light through it to show how it can withstand abuse.

The difficulty of fiber termination is in direct proportion to the inexperience and lack of training of the installer. A properly trained installer has no problem with fiber, and its installation is certainly no harder than getting all the twists right down to the punchdowns on a Category 6 jack so it will pass certification testing.

But the decision-maker is all too often an architect or engineer who learned about fiber 20 years ago and never bothered to get updated on the state of the art in premises cabling. Or it’s a financial type who pinches pennies to maximize next quarter’s earnings and could care less about the long-term cost savings of fiber in the building. Steve Claydon, a California contractor, sums it up: “Selling fiber, even at the design stage, is generally an uphill battle.”

Is there hope for fiber?

Maybe. Remember that practically every LAN uses fiber in the backbone already. According to Frank Murawski, a technical marketing researcher in cabling, about 75 percent of all GbE applications are fiber today and that percentage is expected to remain fairly constant over the next few years. There has been so much bad news about copper that just maybe it will create enough fear or uncertainty among diehard copper users that they will reevaluate fiber as an option for the entire network.

Someday, maybe the cabling manufacturers will decide that all the R&D expenses they incur to update their UTP cabling continuously chasing the elusive “next generation” technology and the marketing expenses they incur trying to convince users that they need another generation of copper cabling would be better spent convincing their customers of the long-term benefits of fiber optics! EC

HAYES is a VDV writer and trainer and the president of The Fiber Optic Association. Find him at www.JimHayes.com.