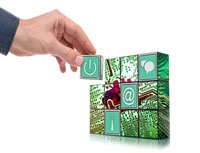 Do your customers prefer a traditional or converged approach to their building automation infrastructure? Does your toolkit include an understanding of standards-based wireless platforms? Is interoperability a growing part of your vocabulary? In a sensor-driven, digitally connected world, answers to these and similar questions will define an electrical contractor’s (EC) assets in the commercial building controls arena.

Experts say the trend toward integration of smart objects—such as sensors, controllers and actuators—in wireless control system platforms has broad applications from commercial and industrial markets to residential and urban markets. Commercially, however, device-level networks for lighting and climate control, security, and energy management efficiency are leveraging wireless systems and a common infrastructure for greater flexibility.

Pulling the plug on proprietary
While there are strategic alliances and different American and global standards developing to formalize platform technologies for building automation, the most important aspect to remember is that ECs are benefitting from interoperability. According to Steve Nguyen, marketing director for Echelon, maker of LonWorks technologies, there’s a growing need to unite the access of multiple systems and provide the ability to interface with outside applications.

“We want a world where the end-user is not confined to the initial provider of a system. There are layers in building system architecture, and you want to make the system interoperable so that all information flows and doesn’t have built-in gates and bottlenecks,” Nguyen said.

Fifteen years ago, building automation controls were deployed as proprietary hardware, software and protocol silos. Building owners had little choice but to take a traditional, noninteroperable approach with proprietary and redundant control networks. In those early days, systems were isolated and could not communicate with each other. Additionally, information was typically ushered only through cabled communication technology.

By the mid 1990s, the controls market expanded with the introduction of two open automation enterprise network protocols or platforms, BACnet and LonWorks. At the time, both protocols were predominantly wired, yet they allowed for initial interoperability of software objects. These two facility information spinal cords opened the digital door at the network layer of the architecture for controls and devices to consume and interpret the same data. For the first time, supporting web technologies over wired topologies and radio frequency technologies were possible.

The wireless wave
As BACnet gained acceptance, it was formalized into an American National Standards Institute (ANSI) standard in 1995 that is governed by the American Society of Heating, Refrigerating, and Air-Conditioning Engineers (ASHRAE). In recent years, the challenge for BACnet was to take the past innovations of wired systems and apply those developments to an increasingly wireless world. According to Jerry Martocci, chair of the Wireless Networking Working Group of the BACnet standards project committee and vice chair of the Commercial Building Automation Profile Group within the ZigBee Alliance, a partnership was formed to tunnel BACnet over ZigBee wireless networks. (Martocci also is lead staff engineer at Johnson Controls.)

ZigBee is an open standard and a global communications protocol designed to promote interoperability between wireless devices.

“These are two different protocols, and they sit at different levels of the system,” Martocci said, specifying that ZigBee’s mission as a mesh network is to pass messages through a system of nodes, moving data from its source to its proper destination. Within the mesh network, the sending node is only interested in the address of the receiving node.

“BACnet is a layer higher, so it knows how an application should interact, such as a packet of data, which is interpreted to turn on a light. BACnet doesn’t know how to route the traffic very well, but it knows what to do with it. That’s why these two technologies can so nicely coexist,” Martocci said.

“Mesh for commercial applications allows for power reduction while that device is in the network, so it increases the reliability of wireless networks and dramatically reduces the cost of putting these types of sensor networks in the building,” said Benno Ritter, ZigBee vice president of marketing and business development.

Green automation grows
Today, battery-powered and batteryless devices are being installed in commercial buildings that can be interfaced to protocols, such as BACnet, EnOcean and LonWorks. Wireless is poised for more growth with the development of energy-harvesting devices through companies such as German-based EnOcean, maker of self-powered switches and sensors at room-level wireless communications that are designed for the last 10 to 100 feet in a building.

It was recently announced that the ZigBee Alliance is in the developmental stages of a green power feature for self-powered devices that derive their operating energy from energy-harvesting technologies. According to Martocci, BACnet’s Wireless Networking Working Group is developing a vendor-independent gateway specification for integrating wireless energy-harvesting nodes or any third-party system into BACnet for building automation and control.

The collaboration to harness smart energy is perhaps the largest growth opportunity for building automation platforms. Simple, cost-effective and scalable smart metering is positioned to significantly contribute to a smart grid build-out that requires interoperability and radio frequency technologies using the wireless Institute of Electrical and Electronics Engineers (IEEE) Standard 802.15.4.

“Our platform actually embeds intelligence into the smallest of devices, allowing them to react to information from the grid that is delivered by services as simple as a broadcast message over a utility or as complex as a call for increasingly reduced energy consumption over a set period of time delivered by an energy aggregator,” Nguyen said.

The ability to leverage a common infrastructure is hand-in-hand with the trend toward smart grid integration, Nguyen said. This is particularly true, he said, for commercial facilities that have renewable-energy sources or other forms of local generation and for smaller facilities that have an inherent need for remotely managed equipment, such as quick-service restaurants.

“We see a need to harmonize the access to both equipment and systems infrastructures under one connection, managed as an IT [information technology] system, and able to provide visibility to the device level. Whether we’re talking about kitchen equipment and lighting or blinds, one common infrastructure with interoperability and the ability to work with outside applications is critical,” Nguyen said.

“For LEED [Leadership in Energy and Environmental Design] Certification and energy management, the number of points being monitored is increasing every year, and wireless helps to accelerate that trend,” Harder said, “but higher demand for monitoring will require electrical contractor resources.”

“A wireless system will cost maybe 85 to 90 percent of a wired system, but it will take half the time. You can still make almost the same amount of profit on a job because the sensors and switches that are wireless and batteryless are higher cost and, therefore, higher margin.”

IP mega trend
The use of sensors through an IP network powered by lines, batteries or batteryless devices is gaining momentum. According to the Internet Protocol for Smart Objects (IPSO) Alliance, voice over Internet protocol (VoIP) and the triple-play packet of voice, Internet and video/TV are fueling a mega trend in IP-based convergence. Companies (including Google) are enabling mobile device connectivity for a quadruple play.

With that foundation in place, the overlay of a commercial building’s three major systems—building management, IT and specialty systems—is expected to catapult network integration to a new level of capability for smart objects. The IPSO Alliance reports that BACnet is currently working on integrating IPv6 support.

Lighting gets interoperable
Lighting systems, too, are getting the building control treatment. Daintree Networks Inc. has launched the lighting industry’s first collaborative wireless mesh lighting control solution. It has created an ecosystem of open-standards products, that can coexist on a single intelligent lighting network, managed centrally by the company’s ControlScope software platform. Using the ZigBee standard, the new partner program is designed to create interoperability between third-party products, such as sensors, wall switches, ballasts and LED drivers to control large-scale lighting networks within buildings.

Company representatives predict the collaborative effort’s technologies could result in up to a 70 percent reduction in a building’s lighting-energy usage. According to Josh Slobin, Daintree Networks’ director of solutions marketing, most of the lighting control systems on the market today require expensive dedicated vendor control wiring that is not interoperable. He said the lack of open standards has stunted the market to approximately 7 percent of commercial buildings employing lighting controls systems.

“We strongly believe that the use of open and interoperable technology will expand the lighting controls market and make wireless lighting controls pervasive. This is a story that has been told over and over again in IT markets. Industries grow when standards develop and products from multiple vendors can work together seamlessly,” Slobin said.

Nguyen advised ECs to carefully think about the interoperability in their toolkits.

“You can learn to use a specific company’s tool, wiring scheme and software, but you’ll constantly spend money to keep up with the market. Or, you can learn the protocols that follow the same paradigm of wiring or network system, and you can transport skills from market to market and system to system,” Nguyen said.