Capturing Lightning In A Bottle 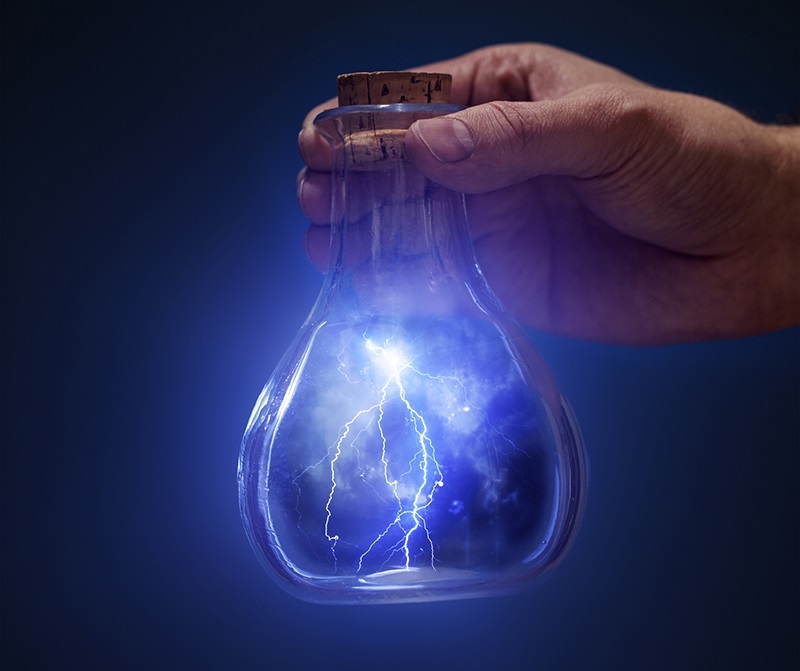 Efficient electric energy storage (EES) has always been both technically challenging and expensive, like capturing lightning in a bottle. As a result, electric power production, distribution and utilization systems have been built and operated so that electricity could be consumed at the instant it was produced, eliminating the need for EES systems. This approach resulted in utility systems built to accommodate the largest expected annual peak power demand with reserve capacity for reliability. Continued load growth, financial constraints, sweeping regulatory change, environmental concerns and other factors have changed the electric utility industry and resulted in incentives such as demand management, time-of-use (TOU) rates and distributed generation designed to reduce load growth through energy conservation, efficiency and production in commercial, industrial and institutional (CII) facilities. EES systems will allow the electrical contractor’s customers to take advantage of these incentives and earn a good return on their investment.

Let's examine emerging EES technologies that the contractor’s customers can use to take advantage of these incentives and improve the reliability of their electric power supply.

Lithium-Ion Batteries. The lithium-ion (Li-ion) battery is an example of a potential crossover technology from the mobile battery market that may find application in the CII stationary battery market. Li-ion batteries are used extensively in plug-in hybrid electric vehicles (PHEV) and electric vehicles (EV), as well as aircraft such as the Boeing 787 Dreamliner, because their light weight and small size result in a high stored energy density. They are more tolerant of ambient temperature variations, and they exhibit greater reliability among other advantages compared to conventional lead-acid batteries. However, these advantages are not as important in the CII stationary battery market as they are in the mobile battery market and typically won’t justify the increased price and safety concerns associated with Li-ion batteries.

Recently, Li-ion battery technology has begun to chip away at the dominance of lead-acid batteries in the CII stationary battery market and may eventually supplant lead-acid batteries the way Li-ion replaced nickel metal hydride (NiMH) batteries in the EV market. The price for Li-ion batteries is dropping due to improved battery design that requires less lithium, more efficient manufacturing techniques and increased manufacturing capacity, which has outstripped EV demand and resulted in surplus Li-ion battery production capacity in search of new markets. Similarly, with increased experience and innovative design, Li-ion safety concerns have been addressed and are less of an issue now than just a short time ago. Lastly, it has been discovered that the useful life for a Li-ion battery in an EV application is much less than that for a CII stationary battery application and used EV batteries can be “recycled” and used in CII EES applications. Currently, there are several small-scale community photovoltaic (PV) and wind demonstration projects that, if successful, would result in a secondary market for used EV Li-ion batteries, which will further reduce the price, reduce disposal requirements and environmental concerns, and promote their use in CII EES applications.

Flow Batteries. There are a number of other battery technologies that are currently being researched or are under development in government and private laboratories in the United States and around the world. One technology that shows a great deal of promise is referred to generically as a “flow battery.” Currently, flow batteries are being developed for large-scale stationary utility EES applications, but they are scalable and may find their way into the CII stationary battery market when commercially available. A flow battery is similar in construction and operation to a fuel cell that typically has an anode and cathode chamber with liquid electrolytes that are separated by a membrane. This membrane allows a one-way exchange of ions between the two chambers resulting in voltage between the flow battery terminals. The difference between a flow battery and a fuel cell is that a fuel cell uses a fuel source, such as hydrogen or natural gas, to produce electricity whereas, like a battery, a flow battery does not have a fuel source or produce electricity but stores electricity during charging through a chemical reaction for later use. Flow batteries are  small, rugged and have the ability to store large amounts of energy. The latest flow battery designs use abundant and environmentally friendly materials reducing cost and environmental concerns.

Ultracapacitors, also known as supercapacitors, are an emerging technology that can be ideal for certain stationary EES applications. While similar to a conventional capacitor, what distinguishes an ultracapacitor from a common capacitor is its ability to store thousands of times more energy. Conventional capacitors have two conducting surfaces that are usually separated by a solid insulator often referred to as a dielectric. The dielectric keeps the charge on the conducting surfaces separated until an electrical connection is made between the capacitor terminals and the capacitor discharges through the external circuit.

The technical name for an ultracapacitor is an “electrochemical double layer capacitor” (EDLC), which describes its construction. While an ultracapacitor has two conducting surfaces with external connections for charging and discharging like a conventional capacitor (the two conducting surfaces are coated with activated carbon) the dielectric separating the conducting surfaces is replaced by an electrolytic solution similar to a battery, and a porous separator is inserted between the two plates to prevent contact. An ultracapacitor gets its amazing ability to store energy from the porous nature of the activated carbon, which increases the surface area of the conducting plate many times at the molecular level, the ability to put these two plates very close together due to the porous barrier, and the fact that the construction results in two layers of charge making it look like two capacitors in series, and resulting in the term “double layer” in its name.

Ultracapacitors can be a suitable substitute for batteries when all that is required is a discharge time of just seconds to a minute or two. For example, if a customer needs an uninterruptible power supply (UPS) to keep critical systems online for the short time between when the normal power supply is lost and the backup power supply can assume the load, then a UPS using ultracapacitors may be a good choice. This ultracapacitor-based UPS would also provide protection from momentary voltage sags like a battery-based UPS. Compared to batteries in applications suited for ultracapacitors, and based on operating experience to date, ultracapacitors appear to be less expensive, need less space, require less maintenance, can survive many more charge-discharge cycles without significant degradation, and do not need regular replacement. Ultracapacitor performance is also more tolerant of the ambient environment than most batteries including temperature variations, which can impact battery performance and life. While ultracapacitors can’t store the amount of energy required for load shifting to take advantage of TOU rates like batteries can, ultracapacitors can be used for short-interval demand management applications like peak shaving and other similar applications.

The time that flywheel systems are capable of maintaining rated output voltage and power depends on a number of factors such as system construction, testing and load. Typically, flywheel systems can maintain their rated output from 20–30 seconds up to a minute, but the manufacturer should always be consulted for a particular application. In CII applications, flywheels are replacing batteries in uninterruptible power systems (UPS) where the UPS only needs to carry the load from the loss of normal power to the startup and synchronization of the emergency generators, which is typically 10 seconds or less. Comparing flywheels to batteries, flywheels typically require less maintenance, have a smaller physical footprint, are not as sensitive to their physical environment, do not require exhaust or containment systems, and do not include chemicals needing special disposal, among others. Where UPS systems are required to operate for longer periods of time, flywheels are being used in conjunction with batteries because most outages are only seconds long and fall within the capabilities of the flywheel. Using a flywheel for these short-duration outages saves wear and tear on batteries, and extends their life making this complementary combination more economical for the customer.

Editor's Note: This article is Tom Glavinich's final piece in our magazine. On Apr. 27, 2014, he passed away after a long battle with cancer. Click here to read more about his life and how he influenced our industry and this publication.

Thomas E. Glavinich was an associate professor in the Department of Civil, Environmental and Architectural Engineering at the University of Kansas. His tenure as one of Electrical Contractor's most trusted and reliable source of industry research ended in 2014 when he passed away. Click here for more about Tom.