Cameras in the Classroom 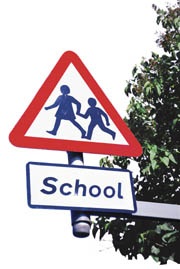 School security is changing as fast as it is growing, and electrical contractors who don’t educate themselves in the latest digital video recording and imaging equipment stand likely to lose out on a lucrative market.

This genre has “graduated,” if you will, to mean much more than a couple of security cameras connected by coaxial cable to a videocassette recorder (VCR). The wish list of most school administrators now includes a digital video recording (DVR) system with a heady offering of security options out of this world. And, the real beauty is that it’s all much more affordable and practical than ever.

DVR systems combine cameras communicating over an Ethernet IP network or other transmission method, such as fiber, with digital recording and network control. High schools and colleges in the United States not currently outfitted with comprehensive digital security systems certainly will be in coming years. Manufacturers following the trend are in consensus and have been prepping and priming their product lines for years to bring digital video recording and surveillance down to a level that is a user-friendly, multifunctional, information technology-based management tool.

Some school districts have already taken the initiative. Montgomery County in Maryland has some 32 cameras monitoring area high school grounds to track fights, altercations or other types of incidents. The school security system includes heat, smoke, water, motion and glass breakage detectors. The system alerts not only the school office of problems in the school, but its central office as well.

In Kansas City, Mo., at the Hickman Mills School District, five local schools were vandalized recently, and the district opted almost immediately to install digital surveillance cameras at each of its locations to prevent a repeat.

In Cupertino, Calif., Homestead High School recently installed four color digital cameras with 12mm zoom lenses around the main quadrant. The cameras channel to a digital server, which interfaces with computers at the facility—administrators are able to watch the movement of students on the main quadrant from their office monitors.

In addition, about 950 new public schools opened in the United States in 2002, and school architects estimated that 75 percent included surveillance cameras.

School administrators are enthusiastic because digital technology makes camera and recording devices easy to use. Digital recording capabilities free up workers and provide immediate, on-occurrence surveillance. No one expects school staff to watch CCTV monitors catch criminal behavior as it occurs on a regular basis. Studies 20 years ago by Sandia National Laboratories found that 20 minutes is about as long as anyone can stay focused on video surveillance. So instead, the monitors are primarily a tool for reviewing incidents after the fact, or most often alert and record on alarm or motion.

Digital signal processing cameras send images and store them to computer hard drives on standalone units or those incorporated into the PC. This allows school principals or other responsible parties to replay a gymnasium scuffle, investigate parking lot vandalism or a lunchroom food fight with the click of a computer mouse.

Of course, with the change come new installation parameters, but most features are even more intuitive and flexible because many are computer- and software-based. “It’s simple to deploy,” said JVC Professional Products Co. (Wayne, N.J.) Project Sales Manager Chris Zenaty. “The use of it is simple, the set up is simple. But [contractors] will have to educate themselves if they want to pursue this market effectively. They have to acquaint themselves with the information technology (IT) side of the installation,” he said.

Linking IT and integrators

Security cameras are not just under the sole jurisdiction of school security systems integrators anymore. When Zenaty attends a security technology meeting at schools today, he is joined at the table by the IT/networking department. Digital technology and computer microprocessor technology is keenly integrated into security components today, so computer savvy smarts are a necessity. Because of the prevalence of Internet Protocol (IP) cameras that network into existing systems, IT is an integral part of the equation. Coaxial cables are being replaced by Category 5 wiring and how that wiring is installed is a concern of both security personnel and IT departments. They both may also vie for space on the network, Zenaty commented.

Network cameras and transmission in video surveillance are attractive to educational facilities. Toshiba America Information Systems Inc., Imaging Systems Division, Irvine, Calif., offers technology that connects to existing networks and provides connectivity for up to 100 DVRs installed on numerous campuses and controlled remotely. It comes with mapping software and Internet connection. “Every application is different,” said Toshiba Marketing Manager Joe Cook, “and has to be looked at independently to be most effective. Some schools are installing up to 32 cameras at numerous entrances, others are using cameras for both security and education, hoping eventually to allow students to watch a class from a remote location.”

Space is also a big consideration in school deployment. The latest product offered by Toshiba is the Surveillix KV-KLR series, which allows schools to mix and match to meet their needs, including the frames per second and number of cameras. These factors have a bearing on how much capacity or space digital video recording takes up on the network and hard drive.

“Ten years ago, if schools were recording at all, it was on a VCR,” said Sanyo Security Video (Chatsworth, Calif.) Northeast Manufacturing Sales Representative Mike Langendoerfer. “The future holds increased quality of video, remote accessibility and bandwidth technology that keeps getting cheaper. It’s only going to get better.” Sanyo offers a fiber optic ring into Ethernet, putting cameras onto an existing system.

School officials, too, are enthusiastic about what they can do with digital recording. Problem locations, such as specific bus stops or classrooms, can be brought under control with the installation of cameras, in part as a deterrent. Cameras targeting dark areas may require built-in or standalone infrared imaging capabilities. Many school administrators choose to integrate their cameras into the duress-alarm system. In this way the camera remains fixed until something triggers an alarm. At that point, the camera pans to the alarm location and records. This “motion-based” recording helps save storage space.

Digital technology can be integrated with access-control mechanisms, allowing users to pull up all images in certain locations where anyone has gained access during certain hours, all within minutes. DVR technology can also take advantage of a local area network, allowing a school district’s central office to pull up images from distant facilities. It is more than security, it is an all-around management tool that will help schools deal effectively with a variety of issues and challenges. EC