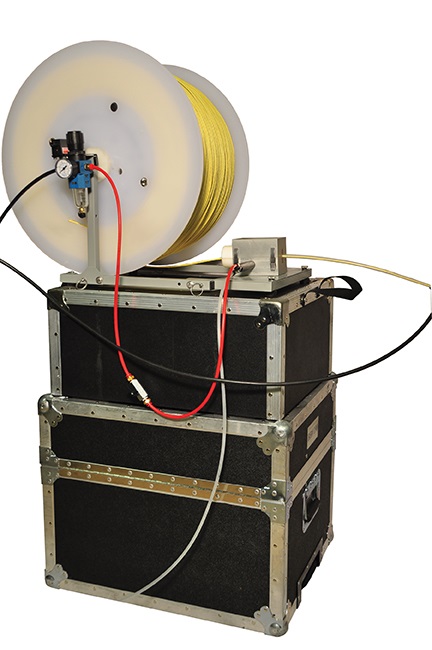 Sometimes, customer requests turn out to be very good things. When a customer approached the team at Hilscher-Clarke Electric in Canton, Ohio, about outfitting its plant with air-blown fiber (ABF), Bill Habyan, RCDD, project manager and industrial division manager, said it prompted his company to add the technology to its repertoire. That project is long since completed, but ABF is still contributing to Hilscher-Clarke’s revenue stream today.

One reason ABF installations are attractive to both electrical contractors and customers is that they typically require significantly less effort than pulling cable the old-fashioned way. Once the backbone of pathways and conduits is complete, future installations are a relative snap. Habyan’s group, for example, relies on a 19-tube configuration in most ABF installations, with each tube acting as a future pathway for new fibers.

“The beauty is that, once we put the 19 tubes in, the hard work is done,” he said. Even when tube runs are several thousand feet long, Habyan said, “I can blow new fibers in with two guys—one on the sending end and one on the receiving end. It cuts your labor tremendously down the road.”

The space needed to support ABF is also usually less than would be required for conventional cabling pathways, a big bonus when conditions are cramped. Most products are designed for footprint efficiency, with multiple fiber pathways bundled within one pipe.

“You would install that one product, rather than installing multiple conduits or ducts,” said Tim Grimsley, vice president of global business development for ABF manufacturer Dura-Line, Knoxville, Tenn.

There will undoubtedly be projects where finding room for several 2-inch conduits is a real chore, and an ABF solution that is far less space-intensive is a reasonable alternative.

In addition to those tight-quarters jobs, several other scenarios lend themselves to ABF. One is where a project calls for the installation of a large or entirely new backbone. In those cases, the upfront cost may be more palatable to customers because much of the expense of installation—cable trays, trenching, etc.—would also exist if the cable were to be pulled the traditional way. Habyan said it also makes sense in locations where you cannot or do not want to make a lot of return visits, such as tunnels; areas that would require operations to be shut down to access them; or areas that are particularly susceptible to dust or other byproducts from a typical installation.

There are, however, projects where ABF might not give the customer the right balance of costs versus benefits. For example, the majority of installations include some room for growth. But when a customer plans to heat up the majority of new fiber right away, ABF could be a harder sell because much the technology’s benefits are in its lower costs over the long term. Customers are able to save money now by only installing the fiber they anticipate needing soon.

“Then, three or four years down the road, when they need more capacity, they would install another fiber cable at that time,” Grimsley said.

If the customer’s needs are so great that they won’t be leaving large amounts of dark fiber sitting around unused, then ABF may not be the right answer.

ABF has upfront costs for electrical contractors, too. Additional equipment is needed to expand beyond conventional cable installation, such as couplers, lubricants and a blowing machine. If your company doesn’t own these items, be sure to include their cost in your ROI calculations. For ECs that have already purchased jetting machines and other necessary items, it is possible to find ABF systems that are designed to work with equipment from a number of different manufacturers.

“One of the things we took into consideration when we started designing FuturePath was to keep upfront costs to a minimum,” Grimsley said. Popular blowing machines from Plumette, Condux and General Machine Products are among those that are compatible with some of the nonproprietary platforms.

A number of ABF manufacturers, such as Sumitomo Electric Lightwave, provide installers with proprietary equipment for use with their products. Blowing machines and associated hardware may be purchased or rented, depending on the manufacturer. Habyan said one upside to the rental arrangement Hilscher-Clarke has with Sumitomo is that maintenance is included.

“After so many months of use, there are little air motors and wheels that need maintenance,” Habyan said.

Rented units are swapped out at regular intervals, and the old units are sent back to the manufacturer for upkeep. This means contractors don’t need to worry about managing service on the machines themselves, and routine maintenance reduces the risk of a parts failure in the field.

Contractors interested in adding ABF to their toolbox should keep a few points in mind. First, know that the need for proprietary hardware—even if the installation equipment is generic—could sometimes make it a challenge to obtain parts quickly. Also, selling customers on the front-end costs of the technology won’t always be an easy task. Be sure you know the benefits an ABF solution offers and whether it is truly a strong option in any given scenario.

Julie Knudson worked in facilities and telecom management before becoming a freelance business writer. She can be reached at www.julieknudson.com.