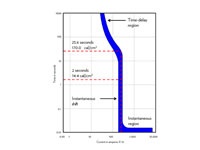 A lot can happen in two seconds. What may seem like the blink of an eye can feel like an eternity, especially during an arc flash.

When calculating the incident energy as part of an arc flash study, sometimes the IEEE 1584 equations can produce unusually large values. Although many variables are included in these calculations, the two most significant are the magnitude of arcing short-circuit current and the duration of the arc flash.

How long?
The duration is normally determined by the tripping and clearing time of the next protective device upstream from the equipment being studied. Time current curves, such as the one in the figure, define the device’s tripping characteristic. The horizontal axis represents the arcing short-circuit current, and the vertical band represents clearing time in seconds.

When using time current curves to determine the arc flash duration, the relationship between the arcing short-circuit current and the instantaneous trip band is very important. The instantaneous is shown as the vertical band on the graph. If the arcing current is to the left of this band, the device should operate in its time-delay region and may take many seconds to clear the arc flash. If the arcing current is to the right of the band, the device should trip instantaneously, and the arc flash will have the shortest possible duration. The precise value of the instantaneous trip is usually not known, but it will lie somewhere within the width of the vertical band, which includes a plus/minus tolerance. The actual value of current could be as low as the left side of the band or as high as the right side.

In this example, the arcing short-circuit current lies within the device’s instantaneous band. This means the device could trip in either the time-delay or instantaneous region, but it is unclear which way it would actually respond. The worst case would be to assume it operates in the time-delay region. The graph in the figure indicates the maximum clearing time for the arcing current is 23.6 seconds. This would result in a calculated incident energy of 170.0 calories per square centimeter (cal/cm2) which is well beyond the limits of personal protection. Although this value may appear to be unusually large, two very important questions need to be answered.

Question 1: Will it sustain?
Is it realistic to expect that an arc flash could sustain for long periods of time—23.6 seconds, in this example? It is difficult to say. There are cases where the arc flash is capable of sustaining, but it depends on many factors, such as voltage, gap distance, enclosure size, the conductors melting and more.

How do you know how long the arc may sustain for a particular situation? You don’t. IEEE 1584 has one exception commonly referred to as the “less than 240V/125 kVA transformer rule” where it is believed the arc may not sustain (see Electrical Contractor, September 2010, page 52). However, with the rest of the cases, until more research is completed, it is always best to assume the worst based on the device’s time current curve.

Question 2: Will you remain?
Let’s say our example actually does sustain for the full 23.6 seconds (my bet is the bus would burn up first). Would a person actually remain near the equipment? Not likely. The natural reaction is to jump out of the way or, in the case of a severe arc flash, be blown out of the way. IEEE 1584 suggests a maximum reaction time of two seconds. This means if a time current curve indicates a clearing time greater than two seconds, two seconds can be used as the maximum cutoff time, unless there is no room for easy escape.

According to IEEE 1584 Section B.1.2: “If the time is longer than two seconds, consider how long a person is likely to remain in the location of the arc flash. It is likely that a person exposed to an arc flash will move away quickly if it is physically possible and two seconds is a reasonable maximum time for calculations. A person in a bucket truck or a person who has crawled into equipment will need more time to move away.”

Using the two-second rule, as this paragraph is frequently called, would reduce the calculated incident energy in our example from 170.0 cal/cm2 based on 23.6 seconds to 14.4 cal/cm2 using two seconds. This is still considered a very dangerous hazard, but a hazard where appropriate protection can be provided. However, the best solution will always be to eliminate the hazard by placing the equipment into an electrically safe working condition.

PHILLIPS, founder of www.brainfiller.com and www.ArcFlashForum.com, is an internationally known educator on electrical power systems. His experience includes industrial, commercial and utility systems, and he is a member of the IEEE 1584 Arc Flash Working Group. Reach him at [email protected].