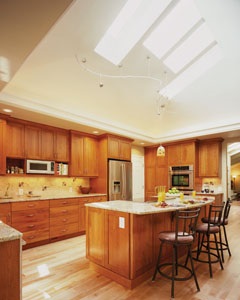 During the opening minutes of “Butch Cassidy and the Sundance Kid,” set in a dimly lit saloon, Butch teasingly warns Sundance that maybe he shouldn’t be getting into gunfights anymore. “We all keep getting older,” Butch said. “That’s a law.”

But the problem today is that the demographics on aging are much more troubling than they were in Butch and Sundance’s day, when infant mortality, disease and the aforementioned gunfighting served to limit the number of folks who lived to sit around the cracker barrel.

The U.S. Census Bureau reported last year that seniors 65 and older are a faster growing segment of the population than younger groups, now exceeding 35 million. Over the next 20 years, 10,000 new retirees will be added to the Social Security and Medicare rolls every day.

To complicate this situation, as life expectancy increases, more seniors have made it clear that they want to stay in their own homes as long as they can, rather than entering residences for the elderly. In current politically correct jargon, a senior in his or her mid-60s to early 70s is a “younger old adult.” If someone in this age bracket or even older wants to remain in their own home, this is called “aging in place” in the United States and “ambient assisted living” in Europe (see “Aging in Place: The New Imperative,” Electrical Contractor, March 2010).

The point is, in order for these people to remain in their homes safely and comfortably, a significant amount of retrofit work has to be done, and much of it requires the expertise of an electrical contractor. However, by all accounts, electrical contractors seem to be unaware of this growing market.

“About 42 percent of our 5,800 members are involved in home- or community-based services as opposed to traditional nursing-type residences,” said Zach Sikes, senior vice president of innovations at LeadingAge, a Washington, D.C.-based association of not-for-profit organizations serving the elderly. “This is the most rapid growth area in our field. To make it possible for younger old adults to remain in their homes safely, our members have to form partnerships with local contractors. Both general contractors and electrical contractors should find out what is being done in their communities to help seniors remain independent in their homes.”

Taking the easy way in
One of the most effective shortcuts to becoming involved in this market is a joint venture sponsored by the National Association of Home Builders (NAHB) and AARP and is called the Certified Aging in Place Specialist Program (CAPS).

“The program was developed in 2001, and despite the down economy and the lack of new construction, enrollment in CAPS keeps growing because of the demand for serving this ongoing need,” said Therese Crahan, the program’s executive director.

The hallmark of the CAPS program is easily accessible information on its website regarding who in a given geographic area has been certified—architects, remodelers, designers or general contractors. Find this information at www.nahb.org/aginginplace or www.nahb.org/capsinfo.

“Electrical contractors are generally unaware of this market and its considerable earnings potential, which they are not tapping into,” said Dan Bawden, president of Legal Eagle Contractors, a remodeling company in Bellaire, Texas. “And specifically, they don’t know about CAPS. Even if they don’t want to go through the course for certification, they can take the one-day construction design solutions class. In a day, they can learn about what retrofit changes need to be made room-by-room for folks with varying degrees of different disabilities.”

Exactly how the electrical contractor should interact with the general contractor in this senior niche market is another topic.

“I would not necessarily advise an electrical contractor to find a CAPS-certified person to work with because that makes him dependent to a certain degree,” said Scott Mosby, president of Mosby Building Arts Ltd., Kirkwood, Mo. “Electrical contractors should be establishing their own bona fides. CAPS training is open to anybody who wants to learn how to work with this older clientele.”

What to sell the senior
Whenever the aging population is the issue, the eyesight/lighting equation is probably at the top of everybody’s list (see “Lighting Through the Ages,” Electrical Contractor, March 2009).

“Adults over 60 only see about one-third as well as they did when they were 20,” said Doug Walter of Doug Walter Architects in Denver. “People with impaired vision have a significantly higher incidence of falls and serious injuries in the home. Staircase accidents account for 40 percent of falling deaths. So this should be a focal danger zone.”

Aside from this specific area, Walter said the electrical contractor should just look around the house and make some common sense judgments.

For example, aging eyes take much longer to adjust to light levels. Is there a dramatic drop in illumination from one room to the next? Raise the ambient light levels and avoid any glare situations, such as unshaded lamps or recessed can fixtures with white trim.

Switches themselves should be illuminated so that they are readily visible in a darkened room. Six-packs of light-emitting diode (LED) night lights are a quick, effective and economical way to avoid many accidents waiting to happen.

“There are a lot of high-risk issues involved in this work, and it’s not just the quantity of the lighting but its quality,” Walter said. “For example, color-rendering index is important, not just for seniors matching their socks, but for identifying which critical pill they’re supposed to take.”

Accessibility of the lighting fixture has always been a problem for older people when the lamp burns out. Here is a solution that sells itself: long-lasting LED strip lighting can be used in hallways as well as staircases, and exterior pathway and porch lighting.

“LED lighting virtually eliminates the problem of seniors having to climb up on something to change a bulb,” Mosby said. Illuminated house numbers are important in case of emergencies.

Moving up the scale, there are more sophisticated installations to consider. Stair-chair lifts, wheelchair lifts and even home elevators are becoming more in demand. Some seniors need backup generators for special medical equipment, all of which require the services of an electrical contractor.

How to sell to the senior
Most observers agree that learning what to sell isn’t as important as learning how to sell in this market.

“The pace of your conversation is critical,” Mosby said. “Older people have a lot of time on their hands, and they’re not inclined to talk fast, move fast or decide fast. To reach them, you have to mirror their attitudes and behavior. Be prepared to install one item and let them see that it passes muster; then they’ll be receptive to more ideas. It’s a slower paced communications process.”

Mosby also pointed out that this whole market is complicated by the fact that both the electrical contractor and the potential senior customer are going through a learning process. Most contractors don’t know the market is there, and most customers don’t know these technological improvements are available, in most cases at a reasonable price.

“To a large extent, this is a generation that learned to do without and doesn’t think they should spend money on themselves,” he said. “They’ll overlook or put off their own needs, but send their kids and grandkids on a cruise.”
“You have to be careful, especially with that younger old adult group,” he said. “You can’t make it sound like you’re retrofitting the house for the handicapped because everyone has denial issues about growing old.

“It’s best to talk in terms of universal design concepts, which are good for everyone in all age groups. I call it ‘grand design,’ which means it’s good for their grandchildren as well as it is for them as grandparents because the safety and security and comfort issues are the same.”

What goes around …
In the final analysis, the more all players in the supply chain get involved in this aging-in-place market, the better the quality of life will be. Products, systems and services only improve through acceptance, use and practical experience.

“This is all about prolonging a respectable way to live,” Mosby said.

“The idea is making these people’s lives and living places safer and nicer to be in for a longer period of time,” Bawden said. “It’s quality of life, feel good work we all should get involved in.”

As Butch also told Sundance, “Boy, I got vision, and the rest of the world wears bifocals.” Plan for the future, and both electrical contractors and their clients win.

QUINN reports on a broad range of business and industry issues for journals in the United States and Europe. He can be reached at 203.323.9850 and [email protected].