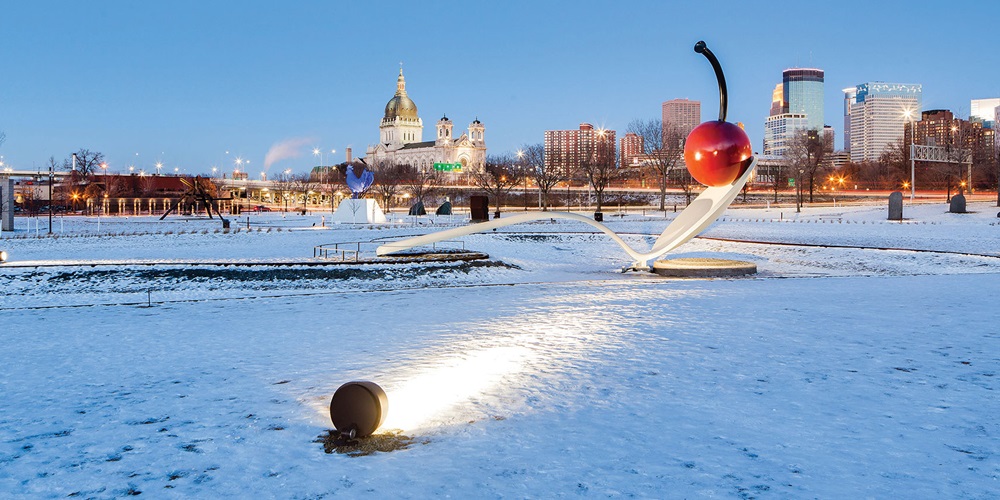 A Twin Cities art landmark got an efficiency and aesthetic rebuild last year that brings its exhibits to life after dark. The Walker Art Center and the Minneapolis Park and Recreation Board (MPRB) have renovated the 11-acre Minneapolis Sculpture Garden to provide lighting, sustainability and accessibility to its growing permanent art collection. The installation, including aesthetic and outdoor lighting, was provided by electrical contractor OlympiaTech Electric, Plymouth, Minn. Mortenson Construction served as the general contractor, and Oslund & Associates and Snow Kreilich Architects provided the project architecture.

After a year of expansion and renovation, the park reopened to the public in June 2017, as one of the largest urban sculpture gardens in the country, with more than 40 permanent pieces of art. The Minneapolis Sculpture Garden was established in 1988 as an outdoor extension of the Walker Art Center and has served as an iconic centerpiece for the city since, featuring artwork such as the memorable Spoonbridge and Cherry sculpture by husband and wife Claes Oldenburg and Coosje van Bruggen.

The park is managed by the Walker Art Center and the MPRB. Its location has proven to be both its strength—when it comes to accessibility—and its challenge because of the wet and lowland nature of the grounds. The peaty, marshy soil make the area perfect for gardening, but a problem for drainage so it was prone to flooding.

Over the years, it has become one of the most popular parks in the state, said Dana Murdoch, design and construction project manager, MPRB. It serves hundreds of thousands of visitors, all four seasons of the year. In fact, 671,000 guests visited the site between June and December of 2017.

The heavy use by visitors and the harsh weather conditions caused enough wear on the grounds that, by 2016, the park required an upgrade. Prior to the renovation, the existing walkways and some pieces of the artwork were lit by bollard lights. The site also included an enclosed glass conservatory with a horticultural exhibit that was costly to heat and operate during winter.

Renovation would include installation of 16 new sculptures as well as upgrading irrigation, drainage and storm water systems. Adding additional sculptures required lighting to accent and highlight those pieces.

Along with more lighting, the group wanted to take advantage of up-to-date technology to boost efficiency.

To accomplish these improvements, and add new walkways and a restroom facility, the MPRB received $8.5 million in funding and an additional $1.5 million from the Mississippi Watershed Management Organization for storm water management.

OlympiaTech Electric began construction in summer 2016 and served as part of the design team, working closely with Mortenson, the MPRB and the landscape designers.

The structures underwent significant changes. The construction team created an open-sided, covered pavilion to replace the enclosed Cowles Conservatory, as well as wheelchair-accessible restrooms. Other facets of the renovation included building granite retaining walls to prevent water collection in areas such as the parking lot, better drainage and an open pedestrian traffic area to accommodate a new light rail stop that will bring further visitors to the park.

Almost as soon as planning got underway, the ambitions kept growing.

“We started thinking bigger, about how we could improve the experience for visitors,” Murdoch said.

The pavilion space needed to better fit with the existing environment without excessive energy costs.

“At the pavilion, OlympiaTech removed most of the existing lighting and installed an LED-based system with architectural, cylindrical LED flood lights mounted on a ceiling that sloped from 18–60 feet in height,” said Jason Schimek, senior project manager, OlympiaTech Electric.

By remaking the glass conservatory into an open pavilion, the city eliminated the cost of heating, while still providing a covered gathering place for park visitors.

The construction team selected the new restrooms and their energy-efficient lighting, installed by OlympiaTech, based on a survey of restrooms at other locations around the country. The EC also installed cables to power the new maintenance building by the restrooms.

In addition, OlympiaTech installed ground lighting in the park and 15 poles for Wi-Fi, cameras, as well as the security system in the parking area.

For the artwork, the electrical team installed 60 spotlights to illuminate certain sculptures.

The park has its own security cameras for general surveillance and to protect the property, especially the sculptures themselves.

The lighting installed throughout the park required more protection than at most facilities, due to the outdoor public setting and the challenging landscaping around the sculptures. Lawn mowers—and visitors—have knocked lighting bollards over in the past, and the city wanted to ensure the lighting was protected as much as possible.

It required special design efforts to locate fixtures away from vehicle and pedestrian traffic, while illuminating walkways and sculptures.

“It also required I-Beam posts around the perimeter of the park—about 20 altogether—to further protect the fixtures,” Murdoch said.

The appearance of the electrical equipment was another consideration. The group chose a custom brown color for electrical cabinets, bollards and trash containers. A lighter shade was selected for the cameras to minimize the heat from the sun.

The sheer volume of cable needed was one of the project’s most memorable features.

To provide power and lighting to the area, OlympiaTech Electric ran 164,000 feet (31 miles) of wire and 50,000 feet (9 miles) of underground conduit to enable enough power for existing lighting plus any future demands for increased power needs. Outlets were added to the pavilion to enable outdoor concerts or other power-requiring programs in that area. The contractor also installed power for food trucks with 50-, 30- and 20-ampere services.

Heavy equipment and soft soil posed a challenge when it came to the conduit. Before installation, OlympiaTech and Mortenson had to consider the vulnerability of underground cable during the immediate construction work and for subsequent renovations. They seemed to sustain any pressure under the renovation conditions. Large cranes were driven on to the site, including a 20-ton piece of equipment that delivered a Hahn/Cock, a 20-foot-tall, blue fiberglass rooster sculpture by German sculptor Katharina Fritsch.

“We did have to plan around the cranes, including considering not only the conduit underground but the thickness of the sidewalks the cranes would pass over,” Murdoch said.

During the renovation work, most of the garden’s sculptures were removed to protect them and create space for equipment, trenches and building efforts. Spoonbridge and Cherry, one of the park’s centerpieces, was among those that had to stay put and remain lit during during construction. Several others were relocated to different public sites within the city or loaned to other institutions.

OlympiaTech used some innovative methods to meet the schedule requirements of the project and the high volume of cable. For instance, while pulling wire, they used open stake-bed trucks to provide support for pulleys to get the miles of cable laid at the necessary pace.

Beyond the sheer volume of cable needed, and weight concerns on the site, the electrical system required close coordination with landscape architects. In fact, they often joined forces with the EC in ways they rarely do. Lights were strapped into trees, for example, to illuminate areas of the park without posts. This was done in nonpermanent ways so as not to damage them.

In another case, the sculpture Black Vessel for a Saint by Theaster Gates, which consists of a tall brick-like silo, required lighting and an interior camera.

“We installed LED cove lighting at the perimeter of the floor,” Schimek said. “We used flex tube—which is outdoor-rated, flexible LED tube—to illuminate the silo.”

On top of all this, OlympiaTech turned up some Twin Cities history when digging the trenches including vases, jugs and glassware dating to the 19th century, and they also ran into some cables buried decades before.

Today, about half of the permanent sculptures are illuminated at night, with a quarter benefiting from dedicated lighting. The park also features a pathway with 20 individually lit benches.

To adapt to the landscape of the area, the city, together with the Mississippi Watershed Management Organization, created three raised lawn “islands” and planted tall grasses in the wetland areas to maintain the natural environment.

The park’s fountain was also designed for sustainability; its water flows into an 80,000-gallon underground cistern for irrigating the park and keeping more than 4 million gallons of runoff out of storm sewers each year.

For OlympiaTech, some of the gratification of a project like this comes at night when passing the park.

“Our work may not get noticed during the day,” said OlympiaTech President Paul Kosmides. “But our efforts are part of what really brings the art to life, with lighting not just illuminating the sculptures, but doing so in a way that considers the appearance, the shadows that are cast, and even how it might look in the summer as opposed to winter.”

SWEDBERG is a freelance writer based in western Washington. She can be reached at claire_swedberg@msn.com.