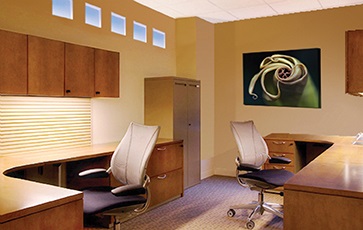 While light makes sight, lighting shapes perception, particularly in regard to color in the things we see. This is because visible white light is made of colors. For us to see an object as a certain color, that color must be present in both the light and the object.

The color appearance of the source and the light it emits is indicated as a metric called correlated color temperature, which is expressed in kelvins (K) and gives us cool-white (about 4,000K), neutral-white (about 3,500K) and warm-white (about <3,000K).

Beyond considerations of how color quality affects space appearance, people have psychological preferences related to the color appearance of white light, about which certain generalizations have become conventional wisdom in lighting design. For example, there is a prevailing idea that people tend to prefer neutral or cool sources at the office (daytime activities) and warmer sources in the home (evening activities).

In traditional lighting design, the color appearance of white light sources typically remains fixed over the life of the system, and that suits the conventional wisdom.

The truth is different spaces have different color needs, and these needs may change based on the time or some other event. While it may be possible to change the shade of white light by replacing existing lamps or specifying conventional luminaires with color filters or separately controlled warm and cool lamps, these solutions are rare.

The advent of light-emitting diode (LED) lighting has led to possibilities with color control that either did not exist previously or were difficult or costly to implement. Many LED luminaires are available with out-of-the-box dimming capability with a negligible cost adder. For the lighting to have color tuning capability, either separately dimmable arrays of warm and cool LEDs are mixed, or separately dimmable colors are mixed with white. This makes it possible for color temperature to either automatically change at various times of the day or in response to certain events, or users can manually adjust the color temperature based on evolving space needs or occupant preference. There also is an effort being made to connect the design of electric lighting systems with regulation of circadian rhythms. Advocates of this link believe changing color temperature in certain ways throughout the day can affect health and productivity.

There are many practical uses of this type of control in commercial buildings. Here are several possibilities that might be explored:

• Open offices in which the prevailing color temperature matches the actual or idealized daylight cycle, providing a sense of connection with the outdoors and visual cues about time of day

• Retail stores where the color appearance of the light is adjusted according to time of day, exterior environment, fashion season and changing pro-duct displays

Many electrical contractors are familiar with Hue, Philips’ wireless lamp. The complete system includes Wi-Fi- connected LED lamps, a network gateway and a smartphone app. With the app, users can access preloaded or customized scenes with different color, saturation and intensity settings, from firelight to sunsets. Similar solutions include the Bluetooth Bulb, LIFX and iLumi products available from various developers.

Additional solutions are targeted at imitating the warm color of incandescent lamps when they are dimmed, providing a distinctive advantage over dimmable compact fluorescent lamps. For example, Osram Sylvania’s ULTRA SE LED Sunset Effect PAR38, BR and R lamps change in color from 3,000K to a warmer 2,000K white light, similar to incandescent lamps, as they dim to 10 percent. Also consider USAI’s BeveLED 2.0 Color Curve dimming family, which includes recessed downlight, wall wash and adjustable accent luminaires; these products change from 3,500K to a very warm 2,200K during dimming. The company’s BeveLED 2.0 Warm Glow family dims from 2,700K or 3,000K to 2,200K; both products were recognized in the 2013 Next Generation Luminaires Design Competition. Another option is Juno Lighting’s Generation 3 WarmDim 600-lumen (14-watt) recessed downlights, compatible with many existing Juno 4-, 5- and 6-inch trims and a dedicated LED scoop trim for wall washing. Juno’s downlights also change to a warm color temperature during dimming.

One interesting color-tuning product at this year’s Lightfair was Aera by Acuity Brands; it is expected to enter the market in 2014 under the Winona brand. These wall-recessed LED luminaires combine indirect ambient illumination and engaging luminous presentations. They have three control functions to manage the white ambient light independently from the upper and lower controls so as to paint the aperture with bold or subtle colors. Users can choose from hundreds of presets or customize their own. Intended to be mounted above eye level, Aera, when set to its realistic daylight sequence, is suggestive of the sky as viewed through a transom window, clerestory or glass block. The most advanced color-tuning device, however, appears to be the Telelumen Light Replicator, a luminaire and suite of developer tools available for scientist and developer use. Any natural light can be recorded and enhanced within rich orchestrations.

An argument is now being made connecting the color qualities of electric light sources with human health and productivity. Light not only helps us see, but it also regulates circadian rhythms, which constitute the body’s internal clock and affect production of hormones such as dopamine, serotonin, cortisol and melatonin. Not so long ago, humans spent most of their time outdoors; now the opposite is true. Lack of access to daylight may disrupt circadian rhythms and the sleep/wake cycle.

The Lighting Research Center (LRC), a division of Rensselaer Polytechnic Institute based in Troy, N.Y., has explored this link. In one study, researchers found teenagers lacking exposure to morning sunlight, which stimulates the body’s 24-hour biological system, may experience a delay in melatonin onset, resulting in later bed times, less sleep and a greater likelihood of being tired.

In another study, researchers explored a light-treatment prototype developed by Topbulb.com, based on prior LRC research. The device consists of glasses designed with a light strip (across the eyebrows) to deliver blue light spectrally tuned for optimum circadian response. When tested on elderly subjects—more than half of seniors suffer from chronic sleep disturbances—the device was found to suppress melatonin. This and other evidence suggests that introducing electric white light rich in blue wavelengths throughout the day can play a role in regulating circadian rhythms, with implications for lighting design. Could an office fitted with lighting matching the daylight cycle—from daylight, electric sources or both—provide a healthier workplace?

Mark S. Rea, Ph.D., director of the LRC, said that, while exposure to blue-rich white light throughout the day can be beneficial, there is no magic bullet. Spectrum is only part of the story. Amount of exposure (light level), duration of exposure (time) and proper light/dark patterns are also important. As for spectrum, while blue light is important during the day, yellow light is even more important at night. An individual working in a building providing blue-rich white light during the day may negate its effect by, say, going to a live hockey game or extensively using an electronic tablet, such as an iPad: note blue light filters are available at night. Overall balance is key. For best results of using light to produce positive health outcomes, Rea said, a programmatic, individualized approach is required, involving calibrated sensors and control algorithms.

In Europe, both Philips and Osram have conducted research exploring the use of controlling color temperature to increase performance in schools.

Philips’s SchoolVision solution (currently fluorescent, but well suited to LED) offers the ability to control both intensity and color temperature. In “normal” mode, which is appropriate for lessons, a standard color temperature and intensity level are provided. During tests, which require a higher degree of concentration, intensity is increased to its highest level while the light becomes cool in color temperature, called “focus” mode. In “energy” mode, students are exposed to a high light level while the light becomes very cool, suitable for the start of school in the morning and after lunch. Finally, in “calm” mode, the teacher can select a warm color tone at the standard intensity level.

The government of Hamburg, Germany, and a local university studied the system over the course of a year. The researchers concluded reading speed increased by 35 percent, frequency of errors decreased by 45 percent, and hyperactive behavior decreased by 76 percent (measured when the students were given a math problem to solve under the warmer light of the calm mode). A similar study in Amsterdam, The Netherlands, also showed positive results, reporting 18 percent higher scores in concentration tests, on average. And a study conducted by City University London saw similar improvement.

Another study—conducted by the Transfer Center for Neuroscience and Learning in conjunction with Osram between November 2011 and February 2012—investigated how light affected student performance at two schools in Ulm, Germany. The study intended to find out whether electric lighting that simulates daylight could increase concentration and cognitive performance in students. The solution involved was LED-based, consisting of striplights featuring separately controlled blue and white LEDs dynamically mixed to reproduce the color temperature of the sky outside the building. The results were consistently positive, according to the researchers; students achieved better results than the control group in standardized tests for concentration ability, and their performance speed also increased.

The power of color

The steady advance of solid-state lighting has made the possibility of a new dimension in lighting control—color tuning control of white light—much more accessible, which offers a number of practical possibilities for architectural lighting. As a result, availability of white light tunable products is expected to continue to grow.

To learn more about color tuning, start at the Human Centric Lighting Committee, a collection of individuals interested in sharing information and promoting the benefits of the proper use of dimming and white light color tuning. Visit HumanCentriclighting.com.