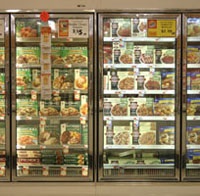 In recent years, interior retail lighting has become as scientific as product selection and point-of-purchase displays, and stringent energy codes are leading manufacturers back into the laboratory to meet the challenges.

If merchandise is critical, then for some retailers, presentation is paramount. The majority of merchandise at retailer Pier 1 Imports originates from Pacific Rim countries where bright colors dominate the textiles and materials of the cultures. Punching up those colors in a retail environment led the company to a bright white light that would replicate a home’s sunroom.

Pier 1’s three-tiered formula for store lighting features primary illumination from a series of 75-watt compact fluorescent spotlights, increasing overall area brightness and reducing costs. In retrofits, the average 10,000-square-foot store was able to reduce its spotlight count from 350 to about 250.

For other retailers, consumer-demanded light has been the answer to achieving a better bottom line. In today’s green age, the combination of light-emitting diodes (LEDs) and occupancy sensors are good business for global Goliath Wal-Mart, where most refrigerator and freezer cases only provide light when you need it—in the buying zone.

These and similar modifications are being implemented in part to cut costs, but also to comply with one of our nation’s key energy initiatives: conservation. Lighting is still the largest energy expense for retailers. According to the U.S. Department of Energy, lighting currently accounts for 37 percent of total energy in our country’s retail buildings.

“I think the most significant changes in commercial lighting overall have to do with code constraints, and that is driving a lot of development,” said Barbara Cianci Horton of New York-based Horton Lees Brodgen Lighting Design Inc.

Mandatory energy codes in most jurisdictions are based on recognized reference standards American Society of Heating, Refrigerating and Air-Conditioning Engineers (ASHRAE) 90.1-2001/2004/2007 and 2003 International Energy Conservation Code (IECC), which incorporates ASHRAE 90.1 as an alternative compliance path. States also have developed energy codes, such as California’s Title 24. In January 2008, ASHRAE published 90.1-2007, enabling states to adopt it or an amended version of it as their energy code.

"Regarding lighting, ASHRAE 90.1-2007 clarifies the standard’s intent and enacts several refinements but otherwise doesn’t revise the lighting power density (watts per square foot) limits from the 2004 versions, which itself was 20 to 25 percent more stringent than the 1991/2001 versions,” said Craig DiLouie of the Lighting Controls Association

Horton said while the code is mandating lower light levels, it takes time for clients to adapt.

“It’s like the tail wagging the dog. We design in these lower light levels to comply with code, but out on the job, customers don’t think they have enough light. We don’t educate them or the contractors. It’s not that there’s not enough light, it’s that they’re not used to these lower levels,” Horton said.

In addition to lighting code changes, last year, President George W. Bush signed House Resolution 6, the Energy Independence and Security Act of 2007. The law, which regulates a wide range of efficiency requirements, targets energy-hogging lamps. Generally, under the new law, various lamp categories must use 25 to 30 percent less energy than that emitted by today’s products by 2012 and 2014. The phase-in will start with 100-watt bulbs in January of 2012 and end with 40-watt bulbs in January 2014. By 2020, all bulbs must be 70 percent more efficient.

Necessity is the mother of invention

“Not only do the metal halide systems yield energy savings, but the lamps also last much longer with average rated lives of 12,000 hours. The quality of light emitted by these lamps over their lives is excellent, making them an appropriate choice for the retailer that plans to occupy the space for several years,” Anderson said.

“Now we can get a ceramic metal halide 20-watt lamp with less power than a compact fluorescent and a smaller aperture with a nicer look, longer life and great color,” Horton said.

From a retail point of view, Horton said the fixtures offer value with numerous benefits.

“But the contractor has to be aware that he can’t go by the old price-per-square-foot formula because these fixtures are two times the cost of fluorescents,” Horton said, adding that she also predicts significant advances in LEDs—not only in individual lamp technology, but their use as a combined fixture.

“With the lower watts-per-square-foot allowances, the reduced-wattage T8 lamps, which are compatible with both instant-start and programmed rapid-start electronic ballasts, provide an easy solution to meet the new standards.”

As codes and lighting technologies advance, it is up to electrical contractors to keep pace with emerging applications. Until recently, lighted commercial refrigerator and freezer cases used linear fluorescents. In many other applications, these fluorescent lamps deliver energy efficiencies. However, according to studies performed by the Lighting Research Center (LRC), fluorescent lamps in this application exhibit a reduced lighting output of up to 25 percent and provide uneven lighting due to cold temperatures, the lack of optics to direct the light and poor configuration and mounting location within the cases.

As a strategy to help achieve aggressive environmental goals, Wal-Mart has retrofitted cold cases with LED lighting and occupancy sensors from Watt Stopper/Legrand, Santa Clara, Calif., in more than 600 stores since 2007.

“Unlike fluorescent lights, LEDs can be switched on and off in cold temperatures without any loss of life expectancy. In fact, turning them off will increase their lifespan,” said Ralph Williams, P.E, Wal-Mart senior engineer.

Wal-Mart officials report the overall savings realized by changing from the previous uncontrolled T8 fluorescent lighting system to occupancy-sensor controlled LED lighting was 92 percent, and the time delay for the sensors was set to the minimum of 30 seconds to further maximize energy savings.

Another solution is a high-efficiency load-shedding ballast technology developed by scientists and manufactured and marketed by Osram Sylvania. It was honored earlier this year with a Technical Innovation Award at LightFair International 2008.

Jim Frey, Osram Sylvania ballast product marketing manager, said PowerSHED is currently used as a method to reduce loads by dimming the lighting in a building when peak electric demand is high or when the available supply is tight. When the ballast receives the power line carrier signal, it can immediately shed up to 30 percent of its load.

“Demand response service providers provide utility customers a way to ‘sell back’ their unused demand to reduce their electric bill. Many utilities use incentives (materials and labor) to encourage installation of demand response equipment. Typically, a utility customer can use these rebates and electricity bill reductions to pay off the investment in less than three years using the simple payback model,” Frey said.

Frey said that in demonstration projects preceding the PowerSHED introduction, the LRC found that reducing the lighting output by one third does not significantly affect lamp life, and 90 percent of the occupants accepted even higher light-level reductions when told that it was being done to reduce peak demand.

The flexibility afforded by track lighting allowed the retailer to modify its displays based on responsiveness to the changing lifestyles of today’s teens, but Title 24’s 45-watt per linear foot calculation totaled more than 35,000 watts per store. PacSun stores were designed using high-efficiency ceramic metal halide fixtures, and each store was projected to consume only 7,000 watts per store and 8.75 watts per linear foot of track.

The sub-branch current limiting panel is UL listed to be placed in-line between the branch circuit breaker and the track-mounted lighting. It is approved by the California Energy Commission and meets the latest proposed requirements of ASHRAE 90.1-2004, which is expected to be issued by ASHRAE in the form of an addendum to section 9.1.14 of the code.

MCCLUNG, owner of Woodland Communications, is a construction writer from Iowa. She can be reached via e-mail at [email protected].