Living up to the Legend 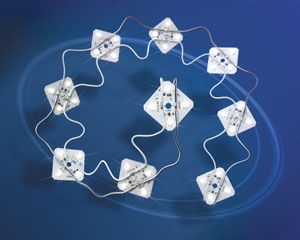 Here’s a light source with the potential to reduce the nation’s energy costs by 6–7 percent, to reimagine the light fixture as a highly compact and dynamic element, to keep 2 to 4 tons of mercury out of landfills and incinerators each year, and to give building owners lighting that doesn’t require lamp replacement for up to a decade or longer.

Today’s LEDs offer many advantages, including low power, no breakable filament or arc tube that can break, long service life, small size, saturated colors, dimmability, no catastrophic failures, a period between failures of up to a decade or longer, no mercury content, and no radiated heat included in the light transmission. Now, the technology seems poised to compete for general lighting applications, but are LEDs ready to take this major leap?

This is the first of a two-part series about how LED technology may be gearing up to go mainstream, why you should be cautious about it, what’s being done about barriers to adoption, what LEDs are particularly good at right now, some tips and traps, and the differences (and similarities) between LEDs and traditional sources of light.

Kevin Willmorth, principal of Lumenique, believes LEDs are on the cusp of exiting the early adopter phase and are poised to enter the general lighting mainstream rapidly over the next few years.

“This year has been an important threshold period for the technology that will define its potential well into the future. It appears that solid-state lighting is certainly on the verge of its tipping point,” he said. “Over the next two to three years, this will become obvious in the rapid expansion of education, standards, products and efficient technologies. What will truly indicate that LEDs have passed from emerging to expanding transformation will be when they are no longer seen as new—a sign of maturation that is required for mainstream adoption.”

The signs, Willmorth said, are crystallizing. LEDs are seen as “cool” and unique, have become established as a long-term trend rather than a fad, are becoming increasingly understood and desired, and are being nurtured by industry and U.S. Department of Energy (DOE) funding and market support. The technology is advancing rapidly with better products offering steadily improving, verifiable performance and falling costs. And codes and legislation continue to demand ever-higher energy efficiency from lighting systems.

“Whether or not this is the exact moment of this technology’s launch to prominence will depend on how well it overcomes credibility issues created by hyped-up claims, meets the challenges it faces in meeting real-world performance demand, and satisfies price expectations,” Willmorth said. “Just how far LEDs will reach into the market is also hotly contested, with estimates ranging wildly between 30 and 100 percent of all lighting eventually succumbing to this new source. But few would argue against this technology playing a significant role in the future of lighting design.”

Just because a new technology is more efficient than an existing technology, however, does not ensure success. For example, the compact fluorescent lamp promises 75 percent energy savings and similar light output relative to comparable incandescent lamps. While sales of CFLs have increased dramatically in just the past few years, they haven’t displaced the majority of incandescent lamps, which convert only 10 to 15 percent of their electrical input into light output, with the rest dissipated as radiated heat. Why is that?

DOE studied the CFL market to find out. The poster CFL of the mid-1980s was a buzzing clunker with poor color quality and a high price of $25–$35. Even though today’s CFLs are dramatic improvements over primitive ancestors, many consumers still see CFLs as expensive, low-quality lights, proving that first impressions last.

In other words, in these first years, the LED community could either achieve rapid mainstream adoption or face the same agonizing and slow growth rate of its predecessor.

Aside from the technical hurdles related to efficiency, light output, color, and thermal management and cost, the main institutional barrier to LED growth has been a lack of industry standards and test procedures, opening the door to sales claims considered whoppers—LEDs generate no heat! Draw no power! Last forever!—but also sales claims about specific product performance that are, intentionally or unintentionally, simply misleading. LED light sources may be tested in optimal laboratory conditions that would never be encountered in the field. LED light fixtures and replacement lamps may be represented as having the same performance as the LED light source, ignoring losses that occur when the light source is matched with thermal management, the driver, optics, etc. The result is a lack of good information about products and a related lack of confidence in LED lighting that are combining to impede the technology’s adoption and to risk creating negative impressions that could hound it for years.

For example, the DOE tested 50 LED fixtures and replacement lamps in 2007 and found both wide variations in performance and manufacturers who frequently overstated both light output and efficacy. Many products performed either equally to or only a little better than their incandescent competitors. A number of manufacturers provide incomplete information about their products that lighting technicians need to make informed decisions.

There are several lessons to be learned here. First, just because a product is an LED does not necessarily mean it’s energy-efficient. Second, get educated about the basics of lighting and LEDs as a light source. Third, don’t trust any performance claim that can’t be backed up by testing at an independent testing lab. And fourth, don’t assume LED people know everything about lighting and lighting people know everything about LEDs.

The real culprit, however, is not just manufacturer claims. It’s a lack of standards for testing and representing product performance. LEDs are far more reactive to their applied fixture environment than conventional light sources. LEDs also are semiconductor devices coming from nonlighting manufacturers that use different ratings and test procedures than lamp makers. This means new standards had to be developed to reconnect LED performance claims with lighting industry standards, but these were taking up to five years or longer while the LED lighting market exploded with new products and rapidly evolving technology. At press time, the first critical testing standards were getting close to publication, fast-tracked by industry groups with DOE support. These standards, once widely adopted, will allow confidence in product performance claims and enable apples-to-apples comparisons between products.

To receive the Energy Star mark—a recognized and well-regarded independent quality brand—LED products must verify that they offer a minimum threshold for efficacy (they must be equal to or greater than comparable CFL products), service life, light output and distribution, color qualities, thermal management, warranty and no power draw during the off state. The Energy Star mark will distinguish higher performing products from low-quality, low-performing products and products targeting applications that are not yet ready for LEDs. Initially covered are LED fixtures designed for niche general lighting applications, including undercabinet kitchen and shelf-mounted task, portable task, recessed residential and commercial downlight, and outdoor wall-mounted porch, step and pathway fixtures. DOE anticipates that by 2012, 1 million Energy Star-labeled LED fixtures will be sold each year.