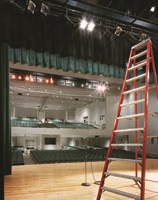 “All the world's a stage,” Shakespeare once wrote, “and all the men and women merely players.” But if there is no light on the stage, is the actor really there? In Shakespeare’s day, lighting was measured in candlepower. Now lighting is measured in watts, amps, volts, beam lumens, field lumens and yes, candlepower, and it is still key to telling a story on stage or in film.

The lighting designer is an important member of a team; however, it is the electrical contractor that makes it possible for the designer to distribute light on stage. The collaboration between the designer and contractor creates a performance space that brings the playwright’s intent to fruition.

While electrical contractors may not be experts in lighting theory, they would be served by having some background information to understand the tasks a lighting system must perform. Illumination, i.e., lighting the stage so the audience easily sees the characters, is pretty basic. There also is focus: lighting that directs the audience toward a given character or stage element. Mood can be set by changing color with plastic film or gels. Lighting can establish a time of day—white light for broad daylight and blue lights for night or a low angle of light for late afternoon. Fixtures also can be used to project images, such as scenery, on the stage. Lighting can define the composition, shedding lights on the part of the stage the director wants to reveal during a particular scene.

The qualities of light are intensity (measured in lumens, lux and foot-candles); pattern (i.e., the shape, quality and evenness of a lamp’s output); and focus (how the light is directed).

A lighting director or lighting designer is intimately familiar with color temperature and the other attributes of light and wants as much control over them as possible. A good theatrical lighting system will supply the control and a great deal of flexibility. The basic system components include power outlets and power distribution, but the most important components, from the lighting designer’s viewpoint, are the dimming system and the control panel or lighting console. These allow a designer to paint a moving composition that captures the audience’s attention and carries the plot from one scene to the next.

The lighting console emits digital signals that control everything else, including the dimmers. The standard digital signal for the past two decades has been the DMX512, created by the United States Institute of Theater Technology. Originally created to serve as a lowest common denominator protocol for use between devices with proprietary protocols, of which there were many, it soon became the primary method for linking controllers and dimmers as well as more advanced fixtures and special-effects devices.

Today, few lighting control devices are not DMX512 compatible. A new standard, Architecture for Control Networks (ACN), developed by the Entertainment Services and Technology Association, allows different equipment from different manufacturers to operate together like DMX, but it also works over Ethernet. ACN allows control devices to discover the properties of new equipment instantaneously; it is bidirectional whereas DMX is unidirectional. Introduced in late 2006, ACN still is in the early part of the acceptance curve.

Control consoles, also referred to as lighting desks or light boards, often are used in a series, particularly for larger installations, and can be used to control lighting, sound, automated scenery and other special effects. The lighting controller is connected to any number of dimmers so that dimmers can be segregated from the stage and audience and lights can be placed where they are needed. In addition to DMX512 cable, newer control connections may include remote device management, which adds management and status feedback capability.

The other key component of a theatrical lighting system is the dimmer, used to lower or raise electrical power to the lamp and, thus, lower or raise light intensity. Color change also may occur in this process, providing the lighting designer some additional control over color. Dimmers are frequently removable modules, ranging from a 20-amp, 2.4 kilowatt unit to a 50-amp or even a 100-amp unit. Constant power modules also may be used to supply nondimming current to other electrical devices in the system. Electrical contractors may be asked to supply a fluorescent module for dimmable fluorescents in architectural lighting.

Modern control and dimming technologies, combined with digital communications protocols, have exponentially increased lighting flexibility and control, allowing remote control of color, direction, beam shape and angle. These “intelligent” lighting fixtures need as many as 32 control channels of DMX to operate. It is said the lighting equipment used in the opening ceremonies of the Beijing Olympics required 45,000 channels.

Len Nitzberg, senior project manager and lighting specialist at Syracuse Scenery and Stage Lighting Co. in Syracuse, N.Y., said it is crucial for the electrical contractor to accurately project the scope of the electrical system, which tends to be larger than one might expect.

“I’d say half of the unseasoned electrical contractors who take on this kind of work lose money. The jobs tend to require more wiring than originally anticipated. A typical high school auditorium with an audience of 300 to 400 people, for instance, might easily need 300 circuits.”

A contractor has to know what he doesn’t know.

Combs said the manufacturer is a willing, and often the best, source of information.

“Manufacturers test their products using certain brands,” Combs said. “The lighting equipment is complicated enough and sensitive enough to behave differently depending on the brand. Although a spec may seem unnecessary or inconsequential, it probably isn’t. A distributor may not be qualified to offer suitable alternatives.”

Gary Henley, vice president of marketing for Texas Scenic Co., one of the leading stage equipment contractors and theatrical systems integrators in the country, recommends contractors new to theater lighting either work with a systems integrator or obtain the proper training from the manufacturer.

“Going through the usual distribution channels for help may not provide the best results,” Henley said. “You have to have help from people who do this kind of work on a daily basis.”

Nitzberg has certification from a number of manufacturers and is qualified to operate the equipment and train system users, something a contractor new to the business isn’t qualified to do. In fact, a common but costly mistake is turning a system on during the installation. In most cases, a lighting technician from the manufacturer must be called in to turn on the system or risk having the warranty voided. The manufacturer’s technician also can provide user training.

“Depending on the scope of the project, a job can take two weeks to two years,” he said, adding that the shorter term projects can be the most difficult. “Imagine getting an installation that has to be ready in two weeks, when it might take four to six weeks to contract with the manufacturer.”

That renders the installation requirements meaningless right off the bat, but even for installations with longer lead times, poor scheduling can cost time and money and make for an unhappy customer.

With those cautionary notes in mind, there is good news for contractors interested in theatrical installations. Henley said electrical contractors should not be put off by dimming control systems.

“These systems are simpler than they used to be,” he said. “When the systems were analog, contractors were often justifiably intimidated. The digital systems have almost become a commodity. If a contractor can install a security system or a fire alarm system, he can install a theatrical dimming system.”

HAMILTON, a former vice president of communications for the National Electrical Manufacturers Association, is a freelance writer and artist living in Parkton, Md., and can be reached at [email protected].