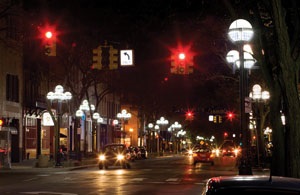 Light-emitting diodes (LEDs) have been appearing in traffic signals and vehicle headlights for years and are poised to affect another source of light we use to navigate our cities and towns. Municipal street lighting retrofitted with LEDs has enhanced several communities’ nighttime environments, while significantly reducing energy consumption and maintenance costs.

Administrators are well-versed in the financial strains of street lighting. It can account for up to one-quarter of a municipality’s electric bill, while maintenance can cost another 15 to 25 percent of their annual operating expense. However, what most municipalities lack, according to Mike Johnson, president, Alloway Electric Co., Boise, Idaho, is basic knowledge of lighting systems and technology.

“They know the buzz words. They want ‘LED’ lighting, but they don’t really understand the nuances of laying out a specification, which will give them energy savings, best financial value, durability, maintenance and avoidance,” Johnson said.

His contracting firm recently consulted with and installed 1,500 LEDs in Boise. The retrofit project will consume 60 to 70 percent less energy than the previous high-pressure sodium lighting technology and save the city $500,000 over the 15-year life of the lights.

“Municipalities are usually very thankful to have someone guide them through the technical aspects of choosing a fixture that will be the best for their particular need,” Johnson said.

Ripe retrofit market
The street lighting retrofit market is ripe with opportunity. According to the 2011 Department of Energy report, “Energy Savings Estimates of Light Emitting Diodes in Niche Lighting Applications,” prepared by Navigant Consulting, there are more than 53 million roadway lights (street and highway) across the United States and 15 million parking lot lights. Of these, it is estimated that only 100,000 have been converted to LEDs. The largest installations to date have occurred in Los Angeles with 62,000 and 20,000 in Seattle.

Edward Smalley, Seattle city light streetlight engineering manager and director of the Department of Energy’s (DOE) Municipal Solid State Lighting Consortium, is confident about the LED value proposition.
“For the first time since Edison’s light bulb, a singular light source appears to show maximum potential to fill all three main needs for lighting: illumination performance, controllability and operational efficiency—providing light we want, when we want, at a cost we can afford,” Smalley said.

Seattle’s LEDs are expected to last at least 12 to 15 years versus the typical four-year replacement cycle for its current high-pressure sodium streetlights. Of the city’s total 84,000 streetlights, 40,000 lights are in residential areas. Once those are retrofitted by 2014, the projected savings is $2.4 million per year to Seattle’s general fund.

However, large-scale acceptance among municipalities has been hampered, said Andrew Brix, energy programs manager for the City of Ann Arbor, Mich.

In a recent budget, Ann Arbor established a moratorium on new street lighting. City staff members tasked with finding ways to reduce public lighting costs successfully piloted an LED replacement for their downtown pedestrian decorative globe lights with those made by Relume Technologies Inc., Oxford, Mich. The retrofit solved optical and thermal issues, had an estimated payback of 3.3 years, and reduced carbon emissions by 267 tons. Following this project, the city received a $630,000 grant from the Ann Arbor Downtown Development Authority for a second-phase retrofit of 1,400 downtown cobra-head lights.
“Capital funding for lighting upgrades is not always available. Also, the industry is still maturing, and many vendors out there likely won’t be around in five or 10 years. So buyers have to be discriminating for awhile,” Brix said.

“Among the larger obstacles for LEDs are the first costs and education,” Seattle’s Smalley said. “For education, identifying the appropriate luminaire for a specific application is crucial.”

“We’re receiving complaints on less than 2 percent of the more than 20,000 lights installed,” Smalley said.

In addition to providing a high-quality light output for long periods, LEDs are strong performers in outdoor lighting applications: they are highly efficacious and resilient to vibration, they function well in cold temperatures, and they mitigate light trespass. Despite these characteristics, the major obstacle to greater market penetration continues to be the initial cost. Prices can be twice as high compared to conventional high-intensity discharge (HID) lighting sources, depending on the lamp or the fixture.

Price is only part of the value proposition, said Mike McClear, Relume Technologies’ vice president of business development. He pointed out that the economics of LEDs are beginning to drive the sales process.
“The price of LEDs is going down. The simple payback is in five- to seven-year terms for municipalities. If you add the incentives and the cash flow from the energy and maintenance savings, you’ve got a pretty good economic program,” McClear said.

Cutting-edge business model
While inroads are being made in major metropolitan areas, thousands of midsize and small communities struggle.

“I think LEDs are a really disruptive technology compared to the existing traditional lighting. The failure modes are different. Performance measurement is different both thermally and optically. Smaller cities who don’t have a big staff rely heavily on electrical contractors [ECs] for their decision about what products to pick, how to get it done and how to weave through the maze,” McClear said.

As appropriations for public lighting fight shrinking city budgets, ECs must stay abreast of sources to help with advanced planning and government programs with grant-making authority. Efficiency Vermont’s new municipal street lighting program is assisting its municipalities to upgrade their older systems to LEDs. The first known statewide program, it evaluates existing street lighting and provides financial and technical assistance to municipalities. Approximately 30 of Vermont’s 248 municipalities have signed up.

According to Paul Markowitz, Efficiency Vermont’s community energy program manager, the first step involves evaluating lighting needs compared to lighting levels to determine whether any fixtures can be removed. After a comprehensive assessment, the Town of Hartford, Vt., determined that one-third of its fixtures could be eliminated, saving tens of thousands of dollars. To alleviate up-front challenges, the program provides grants to qualifying communities to offset acquisition costs. These incentives are tied to the undepreciated costs associated with removing old fixtures before the end of their useful life.
In Vermont, most utilities have adopted new LED tariffs that are actually lower than the existing tariffs for comparable fixtures. Furthermore, most municipalities lease their street fixtures from their utility companies and are covering the full capital costs of replacement. If municipalities continue to lease, they can enhance the street lighting for no up-front cost.

Light homework
As ECs prepare to consult municipal customers through the conversion process, Ann Arbor’s Brix has some sage advice.

“Start with a pilot project. Cities are rightfully conservative, and seeing how one block of new streetlights goes makes it a lot easier to think about taking a bigger plunge. You’ve got to respect the city’s processes; they’re there for a reason, even if nobody seems to remember the reason,” Brix said.

Bob Hahn, general manager of Lumecon LLC, a Relume Technologies distributor, said that there’s no town too small to think about LED conversions.

“When you start looking at the $1,600 a month to keep eight old lights running and you switch them over to LEDs and drop down to $800 a month, that just freed up $800 in cash to fix sidewalks,” Hahn said.
ECs are in the driver’s seat to provide an LED conversion roadmap, Hahn said.

“If their business model is maintaining light bulbs, they really need to look at being an installer for new LED fixtures. If they can make that transition, there’s work out there for the next 50 years,” Hahn said.