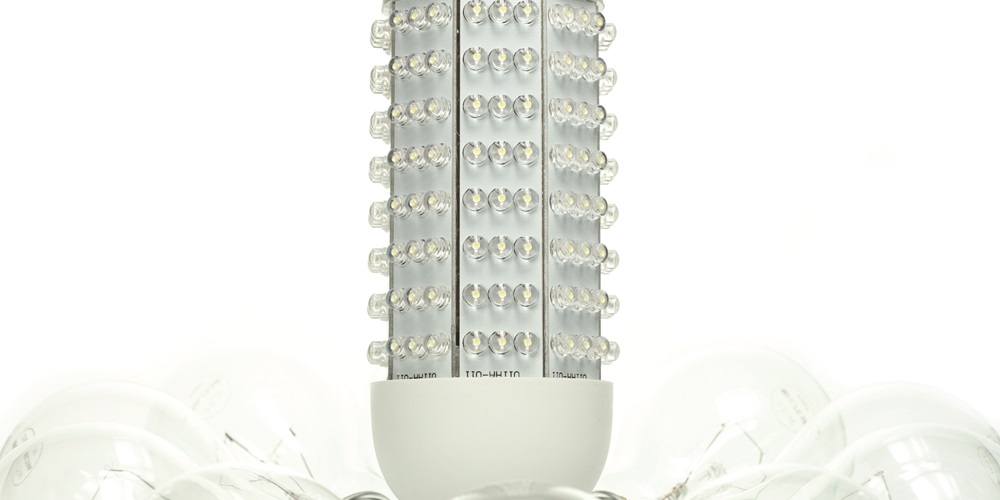 With the growing popularity of light-emitting diodes (LEDs) in different applications, manufacturers are offering more choices, leaving end-users with a dizzying selection of the latest and greatest technology, and they often pass off the specifying to electrical contractors (ECs) who are becoming more experienced with and knowledgeable about LEDs.

“There isn’t an application that people aren’t exploring with LEDs,” he said.

However, the initial costs, which are considerably more than conventional lighting installations, has proven to thwart major market penetration at this point. However, the return on investment period can be as short as a few years if the user uses lighting significantly for many hours per day. According to LED Illumination Evaluation Services consultant Patrick Mullins’ ROI Payback calculator, users can expect about a four-year payback on their investment based on energy and maintenance reduction.

The LED is being continually reinvented, said Terry McGowan, director of engineering at the American Lighting Association (ALA). As a result, the choice can be challenging for those selecting the best product for a specific installation.

“Contractors are looking for something that works,” he said. “They want something they can put to work for an end-user and not have to answer complaints about the quality.”

McGowan said a payback of a few years is about all most end-users can afford. So, for ECs, the competitive edge is often in knowing what products work and will provide that return.

“The best thing for them is to identify products that really make sense,” he said. “Everybody has favorite vendors and manufacturers.”

For contractors, allegiance to a single vendor is not always the best option. Sometimes, new products are worth consideration as well. Some nontraditional manufacturers have joined the LED industry, and some are available online only.

“If you have the opportunity to look at some of these, its well worth doing,” he said.

Electronics companies get into LED business

So who are these newer players in the lighting market? In general, their names are quite familiar. Energizer has a new line of replacement LED lamps, as the company moves into battery-powered mobile LEDs. Toshiba International Corp.’s LED Lighting Systems Division produces LED luminaires for roadway, area, and high- and low-bay lighting applications. Toshiba joined with San Antonio-based GreenStar Products Inc. to produce the fixtures, which can be mounted on walls, poles, ceilings or canopies and are equipped with advanced photometric controls. Consumer electronics company LG Electronics’ Hotel Solution products reduce energy consumption in the hospitality industry using LED technology in displays and lighting.

Over the past year, other large, reputable electronics companies have migrated into the LED market as well. With so many new players, how does one choose the best products? The question contractors need to ask is whether that manufacturer will still exist if there is a problem with a product. In the meantime, traditional lighting companies are now also in the LED luminaire business, meaning there are many well-known brands from which to choose.

The issue of ‘binning’

LED vendors also are increasingly providing packaged solutions that meet a variety of requirements from linear to recessed or downlighting. However, historically, there has been little color ­conformity among LED products, meaning LED fixtures and lamps with slight but noticeable color differences could be placed in the same installation. Until recently, variations in the manufacturing process could affect the color quality, so fixture manufacturers had trouble matching colors across a series of fixtures.

Today’s LEDs provide uniform color and quality for an application, a process called “binning.” Osram Sylvania defines binning as this: “Sorting of both chips and finished LED packages by color and brightness group in order to maintain color consistency within a finished product. ... Upon completion of assembly, LEDs are measured for brightness and color and then are placed into ‘bins’ according to their intensity group and their color group. The binned LEDs are then placed onto reels for shipment.”

Stalker said this process potentially could make LEDs a less risky install since a final outcome can be more predictable. One example is Philips Lumileds’ Luxeon series of LED solutions use phosphor and LED chips in a “Freedom from Binning” solution in which, during the manufacturing process, blue LED chips are matched with different phosphor layers to create even color quality. Luxeon was launched as a single package known as Rebel and has expanded to eight product options to meet a variety of needs for shapes and sizes of lights. They are intended for vertical markets, such as office, hospitality or entertainment.

Being a new technology, there are countless types of LEDs at this point, and the industry hasn’t settled on any design conformity. To help standardize lighting technology, the National Electrical Manufacturers Association (NEMA) teamed up with major lighting manufacturers in 2008 to help the owners and operators of commercial, industrial and institutional buildings in the United States (of which there are reportedly 5 million) to understand how the latest lighting products reduce energy use and carbon footprint while saving money. Secretary of Energy Steven Chu has endorsed the resulting enLIGHTen America campaign, an initiative to stimulate energy-saving lighting upgrades. The group is working on developing a comprehensive electrical energy policy for proven, affordable technology in the lighting technology markets.

With so many new products on the market, “it’s getting to the point where it’s hard for a real game-changer to be heard in all the noise,” McGowan said. The best way to reduce the distraction is to seek out the companies whose products are being tested in competitions. For instance, the Department of Energy has a Next Generation Luminaires Design competition that focuses on the commercial and industrial lighting market for LEDs. It’s important to find trustworthy sources of guidance.

The quality of the LED being specified can come down to not only reliability and return on investment but the caliber of the light they provide. Flicker is one concern. Visibility of flicker can be arbitrary and depends on surrounding conditions, such as the ambient light level, color of the light, age of the observer, duration of the exposure, and application. While most users won’t notice a slight flicker, some do, and manufacturers are learning to advertise their products as flicker-free only if their products truly are.

Lighting controls may be game changers

Stalker said the availability of lighting controls is one factor that may drive LED adoption. LED systems can be installed and then configured with controls, such as sensors and dimmers, to manage lighting use.

Today, controls are being designed to understand the kind of load for each lighting fixture and then operate accordingly.

“There’s a big push in lighting controls that is all part of the energy-efficiency trend,” said Ron Runkles, NEMA industry director. By applying controls to LEDs, he said “it optimizes an already efficient technology.”

He predicted that, in the near future, manufacturers will produce fixtures that incorporate controls with sensors, such as occupancy sensors, e.g., to dim lights in an unoccupied room.

Control technology differs for LED lamps and fixtures. According to a NEMA report, there are more than 100 million forward-phase control dimmers installed today (typically used for incandescent and magnetic low-voltage light sources), and many of them will end up controlling LED replacement lamps. Unfortunately, these are not suited for LEDs and can result in flicker.

Reverse-phase controls are used for electronic low-voltage light sources and can also be used for LED drivers. This control is typically successful at dimming LEDs without flicker. Three-wire control systems are used with fluorescent lighting and can be retrofitted to LED drivers as well. But the best ways to know without doubt that lighting controls will operate with an LED lamp or fixture is to test it or to buy one that is made to work with LEDs.

One expected change, McGowan said, is the growth of organic LEDs. OLEDs provide light on the surface of a panel. Traditionally, OLEDs can be found in television screens, computer monitors and mobile phone screens. Philips, which produces Lumiblade OLEDs, says the process “works by passing electricity through one or more extremely thin layers of organic semiconductor material.” Osram Sylvania and GE are also researching and developing OLED lighting panels for the lighting market. Verbatim Lighting’s color-tunable Velve panel is now available in the United States for standard or decorative lighting applications.

“They provide bright dynamic light and use less energy than conventional LEDs, enabling even architectural-scale lighting displays with minimal power consumption,” she said.

Luminaire manufacturers and furniture designers are developing OLED systems that can integrate with tables and chairs as well as windows, frames and beams.

OLEDs are mostly experimental at this point, but LEDs are being proven already. LED lamps have become brighter, deliver a more pleasing quality of light, are mechanically rugged and are now available in a variety of fittings, which makes it easy to substitute them for conventional incandescent lamps.

SWEDBERG is a freelance writer based in western Washington. She can be reached at [email protected]