Holding Their Own: Linear Fluorescents Adapt to Today's Lighting Needs 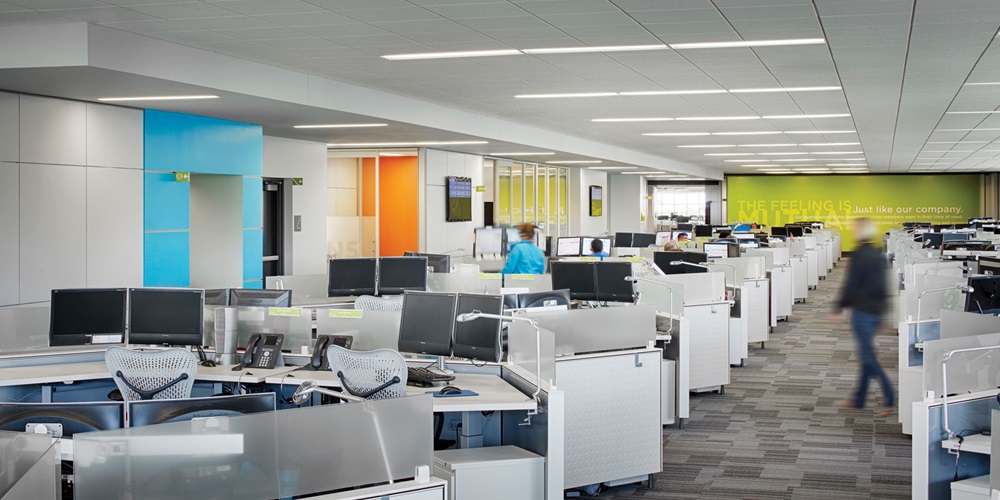 LED marketing can give the impression that digital lighting has left other lighting sources in the dust. Not quite. Linear fluorescents are a case in point. While LEDs have their own merits in light quality, energy draw and controllability, so do many of today’s fluorescents. Environment, application and budget should be part of the conversation when determining the best lighting choice for a space.

While fresh technological advances in fluorescents seem unlikely, smaller, more efficient ballasts and programmability have furthered the control and dimming ability of this lighting mainstay. Manufacturers recognize the continued popularity of fluorescents.

“The innovation of T5 and T8 topped out two years ago,” said Jodi Vallante, product manager—fluorescent at LEDvance (formerly Osram Sylvania), based in Wilmington, Mass. “Lamps are as good as they will ever be in the near future and represent advances in extended life. As far as controls, we now have dimmable, controllable ballasts, which has been a big advancement. Some can combine line- and low-voltage, utilizing one or both for daylight harvesting and line-voltage dimming. These innovations have opened dimming strategies in fluorescent lighting that can enable deeper energy savings.”

“Simple control upgrades can help save energy with your existing T5 and T8 fixtures,” said Brent Protzman, manager—energy information and analytics, Lutron Electronics Co., Coopersburg, Pa. “For a minimal investment in materials, time and labor, occupancy sensors and timeclock controls can ensure that lights are out when a space is unoccupied and generally reduce lighting energy use up to 40 percent. You can replace a standard switch with an occupancy sensor or install a wireless relay paired with a wireless occupancy sensor to save energy without having to invest in new fixture technology.”

While both Lutron and LEDvance see a bright future for LED technology, a simple controls upgrade may be the right move for existing fluorescent T5 and T8 fixtures.

“Controls can work with existing fluorescent fixtures, requiring a much smaller investment [than LED] and deliver significant energy savings immediately,” Protzman said. “There are always fewer control points than there are fixtures.”

The right ballast and dimming

“If you are going to turn on your lights for 12 hours and run them at the same level, then an instant-strike ballast is the right choice,” Vallante said. “Occupancy sensors [OC], however, won’t mix as they turn on and off the lights, sometimes drastically reducing the life of the lights. For example, if you were to set the OCs to 10-minute increments, your fluorescents would last a mere 5,000 hours. If lighting control is important, you should choose a programmable, rapid-start ballast extending your fluorescents to as high as 57,000 hours. The factory setting for OCs turning off lights is every 10 minutes, but the setting can be extended to as much as 30 minutes.”

Vallante said that shunted bi-pin lamp holders can also be an issue with some high-efficiency tubes, such as T8, especially when converting T12 rapid-start to T8 instant-start single pin.

[SB]“In this case, you need to replace or retrofit the socket to single pin,” she said. “Wiring will change as well.”

T12 lamps have been out of production since July 2012.

“Depending on the application, fluorescent and LED sources can achieve around the same lumens per watt for the raw light source, though LEDs deliver lumens more directionally and focused on the work surface,” Protzman said.

Due to the maturity of the technology, most fluorescent light sources have very similar efficiency for the same lamp type, while LED sources can vary widely depending on the quality of LED and driver used.

“We have fluorescent ballasts installed in the field that work without a hitch and are older than many of today’s LED control and driver providers,” he said. “The design of the fixture, which ultimately determines how many available lumens reach the space, will ultimately determine the efficiency of your lighting installation.”

While lighting standards certainly matter to installers, how they matter can be up for debate.

“Most standards and guidelines don’t guarantee—such as retrofitting with LEDs—quality installation or high performance,” Protzman said. “They merely provide a bare minimum level of functionality. Rather than focus on standards, especially LED standards that are still in their infancy and in a state of continuous development, we highly recommend that you work with the fixture and controls manufacturers to identify the best lighting and controls solution based on a building’s specific energy and performance goals. Selling on ‘standardization’ misses the larger points of product performance, lifetime and support.”

Perspective from a controls manufacturer

WattStopper/Legrand, San Jose, Calif., is a major provider of products and systems for electrical installations and information networks, including its WattStopper energy-efficient lighting controls developed for commercial and residential applications. While the company remains agnostic to what lighting its customers use, it offers advice on controllability. For this firm, education is key for contractor lighting control success.

“Controlling fluorescents through dimming needs to be approached carefully,” said Charles Knuffke, VP, building control systems division, Legrand. “You need the right ballast and matching sockets [programmable/rapid-start versus instant start], and proper wiring. Being a controls manufacturer, we’re not significantly concerned if the lighting source is LED or fluorescent as long as it’s a straight-forward protocol like 0–10V.”

Dimming gets more challenging when forward-phased dimming is used, as it requires more complicated hardware in the dimmer assembly.

“Installers need to be cautious and aware of the controlled load,” he said. “Dimming is certainly an enabling technology that allows you to do daylighting, lumen maintenance, tuning, demand shed, and I believe add worker productivity, but different light sources require different dimming equipment. Though a spec sheet may offer some direction, you still may want to ask follow up questions. Controls manufacturers can be very helpful as long as a contractor recognizes lumen output, efficacy and other reasons beyond controllability play a role in lamp selection.”

With lighting, it pays to be cognizant of energy savings and occupant comfort.

“Lighting choices really come down to people specifying things they are comfortable with,” Knuffke said. “Fluorescents are still being specified and so educating buyers is essential and can come from the contractor, manufacturer or a manager from a utility energy-savings incentive program. For programs [green certification] that require an energy-efficiency analysis, controls will always improve energy efficiency.”

In the end, Knuffke said it’s important to keep in mind that while the goal of controls and fluorescents is in part to extend life, you are working to prolong their life every time they go on and off. Having options such as controllable ballasts, longer timed settings for occupancy sensors and achieving energy savings by running lamps at a lower level are important tactics to extend the life of fluorescents and achieve a better and workable lighting control of this light source.