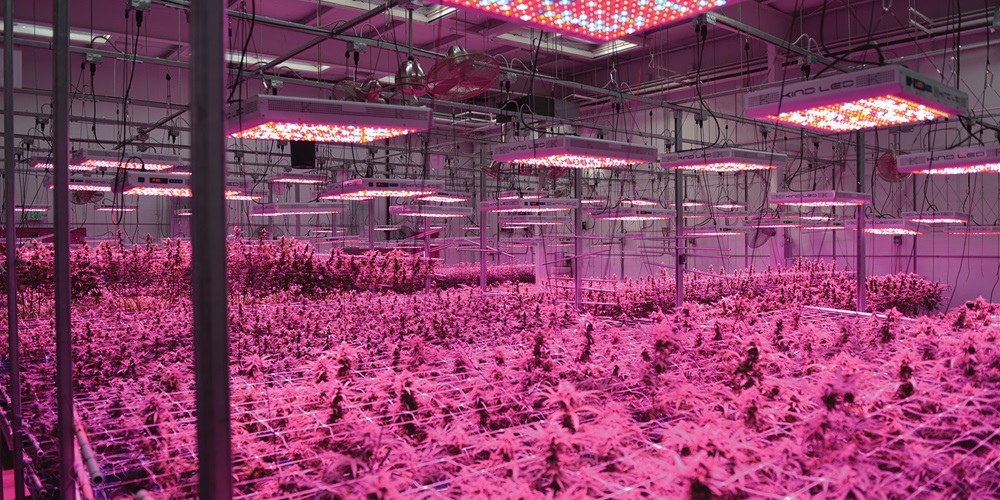 As commercial-scale marijuana cultivators gain popularity in states that have legalized medical and recreational use, there are fears they may begin to leave some of their neighbors in the dark. The high electricity demand of marijuana-growing facilities—called grow houses—is beginning to strain some utilities’ distribution systems and has even triggered outages related to overloaded utility circuits.

During the summer and fall of 2015, soon after Oregon legalized adult recreational use of marijuana, Pacific Power in Portland reported seven incidents in which home-based growing operations overloaded local distribution equipment, resulting in localized outages. In Denver, the city’s Department of Public Health and Environment reported in February that marijuana cultivation now comprises almost 4 percent of the city’s total electricity demand.

Because most grow houses are not traditional greenhouses with access to natural sunlight, artificial lighting is the biggest contributor to such a facility’s demand. As a result of local regulations and a desire to optimize environmental conditions, most of today’s legal marijuana is grown in structures with solid walls and ceilings. These are most often illuminated using high-intensity discharge (HID) fixtures that draw up to 1,080 watts (W) each. The waste heat from those fixtures creates an additional need for cooling to keep all those buds from drying out. With these factors combined, this demand growth is making it difficult for cities such as Denver to meet efficiency-improvement targets.

Replacing HID fixtures with more-efficient LED units may seem an obvious option. After all, LEDs present energy savings of 400W or more per unit. However, many growers remain unconvinced their plants will respond as well to LED illumination as they do to HID lamps. These operations have become sophisticated. Operators pay close attention to lighting spectrum as well as illumination levels.

As a result, the move to LEDs has been slow, so some states are beginning to include grow houses in their efficiency-incentive programs. Oregon is notable in this regard. The Energy Trust of Oregon, a statewide group funded by a surcharge paid by all customers of the state’s four electricity and gas utilities, is doing significant outreach to grow-house operators, including incentives toward the purchase of more efficient lighting and other equipment as well as technical assistance to help maximize the value of these upgrades.

“Lighting projects at cannabis facilities are roughly 10 percent of all lighting projects participating in our business programs,” said Susan Jowaiszas, senior marketing manager for the Energy Trust’s commercial and industrial programs. “We’re doing a lot of technical work now to see if we can identify other cost-effective energy-efficiency opportunities in commercial grow operations for HVAC, dehumidification and other systems.”

“Many growers are using a phased approach to transitioning lighting systems,” she said. “They’re installing LED lighting systems in one phase in their facility, evaluating the results on production and energy use, and then moving forward with another phase.”

Some states newer to legal cultivation hope to address efficiency concerns from the outset by outlining specific energy-performance targets in their regulations. In Massachusetts, where legal retail sales are expected to begin this summer, the Cannabis Control Commission has adopted a lighting power density standard for cultivation facilities that can only be met with LEDs.

Efficiency also is likely to become a bottom-line issue for cultivators as competition increases. The price per pound of legal marijuana dropped 13 percent in 2017, according to Cannabis Benchmarks, an independent price-reporting group. In the 2017 Annual Review and Outlook, published in January 2018, analysts state they expect that trend to continue. Lower prices will put more pressure on profit margins and bring more attention to cutting energy costs.

Of course, the sun supplies the most efficient and least expensive lighting, and some grow facilities are moving into more traditional-style greenhouses, and even outdoors, where conditions permit. Denver-based Green Dragon restocks its 11 dispensaries in part from a 120,000-square-foot greenhouse, where lighting systems run 80 percent less, according to a Colorado Public Radio report. Also, Pueblo, Colo., with the moniker “the Napa Valley of Weed,” is encouraging growers to take advantage of the area’s sunny, warm and dry climate.

It seems the rapidly maturing marijuana industry is on the verge of a new threshold. Just as state legislators and public referendums have moved the business out of the metaphorical shadows, growing competition and higher energy costs are encouraging its entry, quite literally, into broad daylight.

For more on this topic, see “Growing up in Colorado."