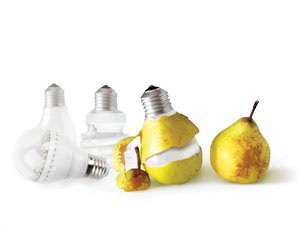 Lighting currently represents about 17.5 percent of all global electricity consumption, according to the EnergyWatch newsletter from Attardi Marketing. The United States alone accounts for approximately 20 percent of this amount at an annual cost of more than $40 billion. As energy efficiency becomes increasingly important for controlling costs, improving energy independence, reducing environmental impacts, and complying with mandates, such as the Energy Independence and Security Act of 2007 (EISA), governments and organizations are looking to lighting as the low-hanging fruit, and the industry is responding.

The technologies
According to a recent report from Pike Research, Boulder, Colo., fluorescent and light-emitting diode (LED) lighting technologies will play an increasingly important role in the U.S. market, making up more than three-quarters of it by 2020. In fact, fluorescent lighting is already the most popular light source in commercial buildings. Why is that? Well, fluorescent lamps are about three to five times as efficient as incandescent lamps and can last 10 to 20 times longer.

Linear fluorescent lamps work in conjunction with ballasts and controls.

“Fluorescent lamps that work with appropriate ballasts and controls can generate more than 100 lumens per watt and last up to at least 50,000 hours, allowing them to compete against LEDs,” said Jim Benson, general manager, commercial marketing for GE Lighting, Cleveland.

“This is a crucial feature for independent lamp operation, which allows only the failed lamp to extinguish and lengthens the time between maintenance,” Grigson said.

Lamps also need controls with more sophisticated technology that enables the implementation of flexible strategies to conserve energy, according to Andrew Lawler, national sales manager for Lutron Electronics Co., Coopersburg, Pa. Control technology introduced over the past several years has included digital dimming ballasts and LED drivers that optimize light levels in both new and retrofit construction, daylighting controls, more personal control of lighting in individual workspaces, and window system controls, which provide another way to access and optimize the use of natural light.

“The quality of CFLs has definitely improved. The light is not as metallic, run-up times over the last five years have improved, and the reheat time is much shorter,” Gelten said.

Some drawbacks of CFLs, however, continue to plague the technology. For example, not all CFLs are dimmable, and they must be designated as such. Furthermore, a dimmable CFL must be rated as compatible with a given dimmer to work properly. When they are incompatible, poor performance can result.

Additionally, many CFLs take a period of time to reach full brightness. According to Benson, the industry is working on incorporating halogen capsules into CFLs, enabling them to turn on instantly, and then, once the CFL component is warm, the halogen component would shut off. This design would produce the instant light users desire in tandem with the energy savings CFLs offer, making it a more overall appealing technology.

However, halogen, an incandescent technology, performs other roles in satisfying the demand for energy-efficient lighting technology.

Halogen uses 28 percent less energy than other incandescent technology, is dimmable, offers the same color temperature, and is an affordable option that meets the EISA lumens per watt standards that go into effect in January 2012.

High-intensity discharge (HID) lamps, another light source, are still one of the best performing and most efficient lamps for illuminating large areas or great distances. Metal halide HIDs, which produce white light, are replacing high-pressure sodium lamps in many outdoor applications because white light sources can be two to 30 times more effective in peripheral visual detection than yellow-orange sources. In addition, there’s been a shift from using quartz to ceramic metal halide over the last several years.

“Ceramic is less sensitive to corrosion and can be run at higher temperatures,” Gelten said.

Other efforts to further HID technology include improving the color rendering and the development of special ballasts that allow HID lights to be step-dimmed to 50 percent or other levels.

LEDs, still the newest energy-efficient lighting technology, emit visible light in a very narrow spectral band, but by combining an array of red, green and blue (RGB) LEDs or by using a phosphor coat on a blue LED, the technology can produce white light for general illumination applications.

“Phosphor is being applied to the solid-state components in new ways that are increasing efficiency and limiting the light loss,” said Rick Hamburger, director of segment marketing for Philips Lumileds, San Jose, Calif.

With lumens per watt reaching and exceeding more than 100 for warm white light, the return on investment for white LEDs is becoming more competitive with halogen for use in retail, hospitality and office applications.

It is important to note that, while the entire general lighting market fell 15 percent in 2009, the LED segment experienced 24 percent sales growth, according to Strategies Unlimited, Mountain View, Calif. And in its USA Market Review & Forecast for LED Lamps in General Lighting, ElectroniCast Consultants predicts U.S. LED lamp sales will grow to $1.64 billion installed in the year 2015, including new construction and retrofitting/replacement of existing installed base.

“More end-users are also beginning to realize the advantages of efficient lighting technology to reduce energy use, operation and maintenance costs, and to add value to their property,” Anderson said.
Many building owners also want to demonstrate their commitment to sustainability.

There has also been an increase in building owners demanding that their project meet Leadership in Energy and Environmental Design (LEED) certification requirements, Benson said.

“That certainly drives higher demand for products that achieve the necessary points in each of the LEED categories. But it’s a two-way street with a great deal of interplay between what the industry can provide and the green building standards that are being developed,” he said.

Meanwhile, the Energy Star program, according to Hamburger, is trying to become more technology-neutral, that is, certifying whichever product meets the energy saving and performance specification of the program.

“Specific solid-state lighting incentives and rebates [are] being offered by utilities that are driven by [the] DOE and Energy Star performance requirements in both indoor and outdoor applications,” he said.

Grigson agreed that LEED and Energy Star are pushing energy efficiency but believes that the American Society of Heating, Refrigerating, and Air-Conditioning Engineers (ASHRAE) standard is probably the most influential one at this time because the DOE is requiring states to have energy-efficiency building codes that meet or exceed ASHRAE’s Standard 90.1 2004.

“The ASHRAE standards have aggressive levels for lighting power density, and eventually, only the most efficient technologies will be able to meet the needs of the space and comply,” Grigson said.

Finally, making ballasts more environmentally friendly in terms of mercury and lead content is partially driven by the adoption of directives such as the Reduction of Hazardous Substances (RoHS), Benson said, and partially by people starting to think about getting ahead of any upcoming legislation.

“An RoHS-compliant T8, four-lamp system contains only 9 milligrams of hazardous substances, compared to the 13 milligrams found in a standard lamp system,” he said.

Mandates, green building codes and sustainability trends are all pushing lighting control manufacturers to develop and deliver more simple energy-saving solutions to the market that can be applied to the existing space without making major renovations.

Bright opportunities
Electrical contractors that know about the incentive programs and qualifying products available in their area can reach out to building owners with services that include site surveys, upgrades and financing proposals.

“By utilizing all the available resources, knowing the options, and developing system and cost comparisons, electrical contractors are in the perfect position to provide guidance to building owners and decision-makers,” Anderson said.

Getting ahead of the energy legislation that is guaranteed to be coming up during the next few years is another way contractors can bring energy solutions to their customers today that will meet or exceed those efficiency mandates and provide building owners with lower operating costs.

“A contractor that invests in training itself on the latest efficient lighting trends and technologies will be able to bring value-added solutions to their customers,” Benson said.

Hamburger advises contractors to educate customers on LEDs’ improved efficiencies and how the technology enhances the overall quality of light in an area.

“Go to manufacturers and distributors to get the latest information and team up with lighting designers to more fully demonstrate LEDs’ value,” he said.

The need to squeeze increasing efficiencies out of light sources, ballasts and controls will also drive the continued convergence of building and information technology systems, putting contractors in the prime spot to exert their expertise and create an endless array of opportunities.