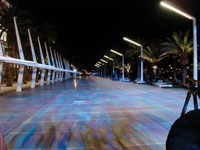 LEDs have been on the market long enough for electrical contractors (ECs) to know the major selling points: energy efficiency and longer life expectancy, thus reducing both energy consumption and maintenance costs.

But there are more selling points. In many outdoor applications, light emitting diodes perform better than traditional technologies because of their durability and ability to withstand cold.

“Tiny LED devices are very rugged and can be dropped, tossed or shaken without damage—very different from fragile traditional sources, which can be broken or damaged in shipment or operation. LEDs’ rugged characteristics also diminish the chance of damage from vibration in parking garages and bridges.”

Additionally, LEDs can be conformally coated, which is a process of applying a thin material over the LED to protect the device from moisture or dust. Such coatings can make the LED light modules used in lighting fixtures particularly useful for damp environments, such as in marine areas.

“The starting temperature requirements of standard fluorescent ballasts may prohibit fluorescent usage in extreme cold environments,” Primous said. “In contrast, LEDs actually perform better and more efficiently in cold climates. LEDs essentially are electronic chips, and much like computers and similar products, they like the cold and need to be kept cool to operate properly.”

Profit-conscious ECs may want to study outdoor areas that could benefit from LEDs’ ruggedness and cold tolerance. Consider, for instance, the millions of traffic and rail signals nationwide that require constant reliability 24 hours a day, 365 days a year. Investigate the diverse array of signal types out there. How many traffic and rail signals in your area could use LEDs to replace older fluorescent and incandescent technologies?

Two state organizations initiated the Kentucky retrofit, according to GE Lumination LLC, Valley View, Ohio, manufacturer of the estimated 77,000 RX11 high-visibility LED traffic signals installed during the five-month project. The goal was to reduce operational and energy-consumption costs by up to $3.2 million per year.

Several factors motivated Kentucky officials to pursue a statewide LED initiative. The average life span of incandescent bulbs used in Kentucky traffic signals was 10 to 11 months versus 8 to 10 years for the LEDs. Before the upgrade, Kentucky spent about $1.5 million in salaries and equipment usage annually to replace burned-out traffic signal bulbs.

“We see this as a best-practices maintenance and energy-savings story,” said Kraig Kasler, vice president of marketing at GE Lumination LLC. “We hope government transportation officials throughout North America will notice.”

The following sections specify the applications for LED lighting as the technology is adopted.

As part of the commitment to creating an “LED City” during an 18-month period, Raleigh plans to extend LED lighting, through its living-laboratory initiative, to garage and parking-lot lights, street lights, architectural and accent lighting, portable lighting, and pedestrian and walkway lighting. Both Cree and Raleigh public officials hope the initiative will serve as a model for other cities considering implementing energy-efficient infrastructures.

The first project focused on an LED installation in a parking garage. LED-based lighting fixtures were installed in the Raleigh Municipal Building parking deck in December 2006. Progress Energy, Raleigh’s primary electric utility provider, said the LEDs use 40 percent less energy than the standard lighting system and improved the light quality in the garage. (Editor’s Note: For more information on the project, visit www.ECmag.com and enter “Raleigh” in the search box.)

Landing huge state municipal LED contracts such as the Kentucky and Raleigh projects may seem like a long reach, but it’s not impossible. To start off, you can build your knowledge of LED applications by reading articles, browsing manufacturer Web sites, and attending trade shows and manufacturer-hosted seminars.

After gaining the necessary knowledge, ECs need to establish themselves as capable LED lighting providers, said Greg Merritt, Cree corporate marketing director. “To do this, build relationships with LED lighting manufacturers and become familiar with product capabilities and technical requirements. This enables you to become part of the team bidding on new LED projects. Because municipal projects have long lead times, the lighting often is specified and contracts written well in advance of construction. Get in early. Also, given the rapidly changing LED technology, allow for new product upgrades.”

To get the contract, first you must bid, but how do you go about bidding on an LED contract? In addition, how do you change a spec that you believe, through prior experience, will not work?

Andrew Holt, Nu-Art Lighting’s division engineering manager, Salt Lake City, advises clearly defining a timetable for the proper submittal sample and laying it out with the people who won the contract so it is clear, concise and does not hold up any part of the project.

Get with your various suppliers and distributors to define a timetable that will allow everyone to succeed. Missing deadlines and milestones can be very expensive for ECs. For successful project bids, Holt advises the following:

2. Determine if you can do it (if you have a fixture that will work, can get the correct rating, have the proper certifications, determine costs).

5. Assemble a submittal package and sample with all certifications the specifier wants.

“Some smaller contractors see the numbers on large contracts and rush into it without doing the ‘7 P Rule’: Prior proper planning prevents piss-poor performance,” Holt said. “Contractors who rush into bids don’t outline their needs adequately or establish workable timetables and milestones for each distributor and manufacturer involved. This can result in liquidated damages for not hitting milestones and late projects.”

As LEDs projects increase in number, the electrical contractor is in a great place to win the bid.   EC

WOODS writes for many consumer and trade publications. She can be reached at [email protected].
Share this article

Pat Woods writes for many consumer and trade publications. She can be reached at [email protected]".