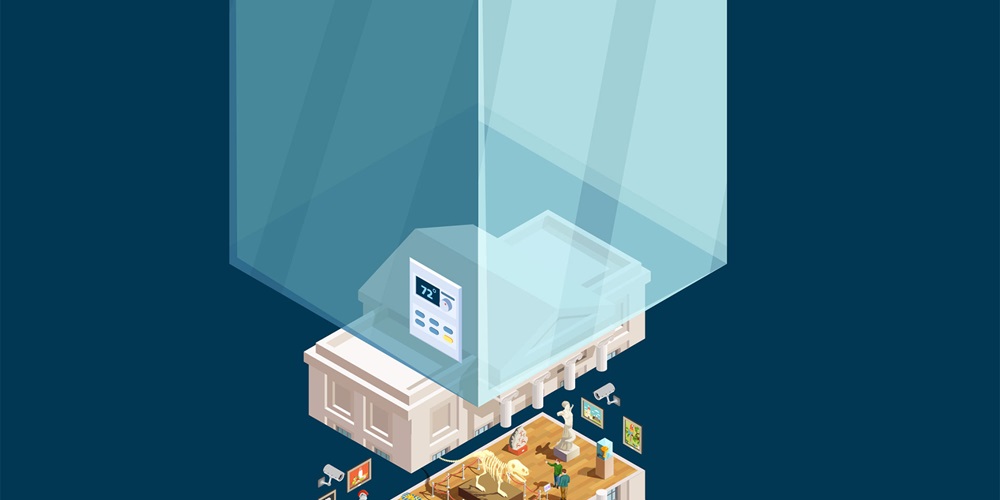 Museums operate in one of the most challenging environments when it comes to protecting assets. The assets are publicly accessible, often high value (possibly priceless), and sometimes sensitive to environmental damage. That means everything from an accidental touch to theft to humidity can pose the risk of an expensive loss. Modern systems are increasingly designed to address these risks.

Guards stationed around a premises offer a long-trusted solution; however, they are expensive and limited in what they can see, hear and do. Then there is the question of the environment—if the room’s temperature is slowly eroding a priceless piece of art, no guard can detect that.

Climate control on the micro level

Today, museums have found keeping artwork and artifacts in optimal conditions can be done at the microclimate level—creating an optimal environment for cabinets, groups of artifacts or even each item itself. That means ensuring a painting hundreds of years old, or a vase several thousand years old, never experiences temperatures or humidity outside of its healthy range.

In the 1970s, museums and technology companies started seeking new ways to ensure the climate was intelligently managed in places where the exhibits were sensitive and high value. A 1978 conference at Toronto’s Royal Ontario Museum—“In Search of the Black Box”—explored how a museum could actively control conditions in display cases. Companies began offering machines that could help monitor and control climate within a building, and museums started exploring how they could control the climate even down to a display case in real time.

Jerry Shiner, founder of Keepsafe Microclimate Systems, Toronto, began developing solutions as well and, by the early 2000s, was making machines for customers in North America, Europe, Asia and Australia that create microclimates within display cases and storage cabinets. Today, the company offers four versions of the system, all of which cool, heat and dehumidify air according to a museum’s needs. In addition to controlling temperature and humidity, the machines measure results and can send that data over Wi-Fi. They use power over ethernet and Cat 5 cable for powering those sensors.

A large microclimate machine can serve an entire room or gallery, and smaller versions are designed to be mounted near or under a showcase. Usually, local electrical contractors install the machines. The machines typically serve as a retrofit in existing buildings that require better climate controls.

“They are most commonly installed in older buildings where environmental effects are a greater issue,” Shiner said. His company’s systems are being used at the Newseum in Washington, D.C., Chicago’s Field Museum and the Royal Ontario Museum.

“At a certain point, people are paying exorbitant bills for heating and cooling” Shiner said, to ensure the collection is protected from the climate, and that is often excessive. “You can save an immense amount of money by installing the right technology.”

In fact, anecdotally, he said, the company has been seeing 30 percent savings in energy costs with the use of microclimate machines.

Climate control is going wireless, in some cases. The internet of things offers the ability to track conditions using sensors without running more cable.

However, wireless systems remain a luxury item for many museums, said Steve Keller, president of Steve Keller & Associates, a museum security consulting firm. The market hasn’t significantly adopted wireless systems yet because they could pose security risks since the data is going to a server.

U.K.-based Fortecho Solutions provides ultra-wideband technology sensors to track conditions around art, and shock detection or accelerometers to identify if a piece is being moved. The system is designed to track environmental conditions and theft threats using credit-card sized devices from Wavetrend that transmit sensor-based conditions to a server. If someone attempts to move a piece, the system can send an alert or trigger an audible siren.

Fortecho’s software also can link that sensor information with other security devices in a museum such as the cameras. In that way, it could identify that something is moving and trigger recording of digital cameras located on the path to the exit. Wireless technology is a benefit for moving or temporary installations, said James Sainty, Fortecho Solutions’ commercial director.

Texas technology company SwiftSensors offers another wireless monitoring system that detects temperature and humidity changes within cases or displays and sends that data to a server. Its technology was recently adopted by Chicago’s Adler Planetarium to monitor its collection in the exhibit halls and storage rooms.

Even in the best climates, exhibits are at risk from visitors, whether it’s an inadvertent backpack sling or a planned theft.

Keller has been seeing more sophisticated object protection systems that track conditions around any piece of art or artifact. For example, Acuity-vct, which designs custom network video surveillance, uses a video camera designed to be small and unobtrusive, which looks down from the ceiling and covers a wide expanse of walls.

In museums, Acuity-vct offers a variety of customizable solutions, said Dan Lazuta, director of sales and marketing and principal. The alerting can be an audible tone or a discreet message sent to managers. It can trigger an automated warning to patrons if they get too close to a piece of art, which spares guards the awkward position of warning guests to step back or being accused of profiling. Instead, those near the art simply hear a discrete warning to step back. That serves as a relatively private correction, so the visitor doesn’t feel they have been scolded.

An automated system serves as a deterrent, Lazuta said. With the Acuity-vct system, one museum documented 275 touches in a gallery area, while guards detected only five.

Once the system is in use at a museum, he said, the number of touches starts going down. Data from the system also helps managers better design their displays. For instance, based on sensor events, they can find that displaying art in specific ways increases touches, Lazuta said.

“Everybody’s goal is to protect the artwork and objects,” he said.

Museums can use a software tool to create a box over the face of the exhibit to set up motion detection. And the protection zones can be monitored by a museum’s camera. When pixels in the image are disturbed, guards get a pop-up notice in an app or on a desktop computer about the breach.

Systems such as this provide analytics. A camera can be taught that not every stimulus is an alarm, thereby reducing false alarms, Keller said. Museums also can use this type of system to gather statistics that they can use for visitor management, he said.

“We’ve been able to do video motion detection for 30 years,” he said.

Today’s software makes motion detection data more intelligent and usable. For example, motion-detection cameras enable museums to gather traffic data, such as bottleneck locations, or whether tour groups are scheduled in such a way they don’t create slowdowns. Software can help museum officials with planning and modifications.

There are similar security solutions for collections of rare books and documents. Especially in the case of documents, it isn’t practical to put tags or stickers on every piece of paper to ensure it doesn’t disappear, and staff members don’t always have time to count multiple in a folder before reshelving.

Companies offer software for use with forensic-quality cameras to track what happens with documents as they are perused by a patron. But to catch a problem in real time, some companies are designing a different kind of solution. A few well-funded libraries are using scientific scales on their counters that can detect the weight of a business card. Staff members weigh the folder before handing it over to a patron, and again when receiving it back. If one document is missing, the scale can identify that problem.

“That’s a brand-new product that’s only in one or two places” thus far, but is likely to expand, Keller said.

Acuity-vct uses local integrators or contractors to install the systems in some cases.

“We’re happy to work with integrators. There is a huge, untapped market to sell into. We’ve spent a lot of time developing tools,” Lazuta said, and the company expects them to be adopted further in the coming months.

This kind of installation is a useful retrofit for museums seeking to add intelligence and sensors to their existing equipment.

“We can reuse existing cameras. We just bring cameras into our system,” he said, including motion detectors and audible signals.

Protecting treasures is a vital charge with unique considerations. Technology that electrical contractors can supply and install will help museums ensure its priceless collections stay in good condition for generations to come.