The Doctor Is in the House: Connected healthcare technologies are on the rise 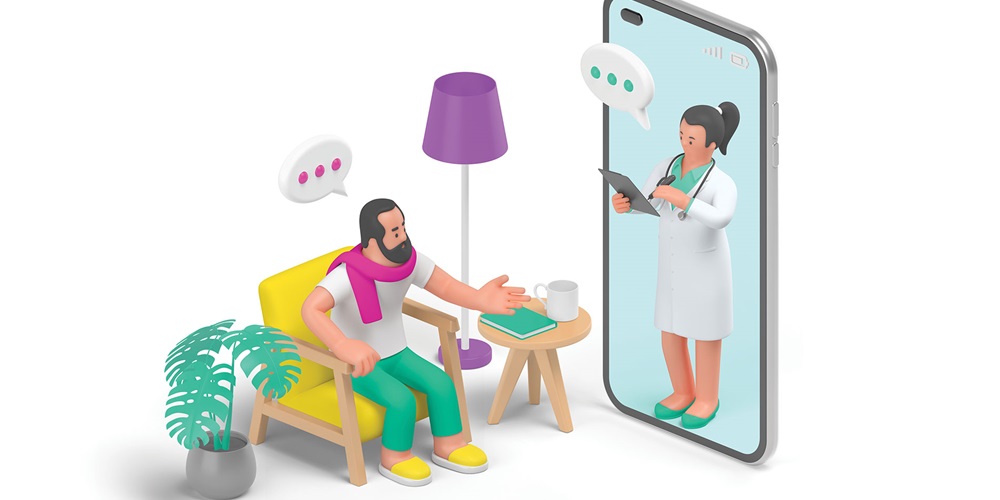 ne of the many changes prompted by the COVID-19 pandemic was the shift to medical care outside the doctor’s office. A movement that started with devices connected to a router is evolving toward a networked system that follows universal standards and can be integrated into a home. With that in mind, a wide variety of healthcare-based technologies are poised to change the way people interact with their doctors.

It began with in-home health electronics—from blood pressure cuffs to glucose monitors—and the trend accelerated when people couldn’t go to in-person visits to the doctor during the pandemic. Many patients now expect to have access to doctors, other healthcare providers or caregivers without leaving their home. Technology companies have addressed this in multiple ways.

One distinction among in-home technologies is whether they are active or passive. Passive technologies include cameras, sensors or devices embedded in homes that allow an individual’s health and well-being to be monitored without their input. Bed sensors can capture restless nights of sleep and other devices can check a pacemaker, identify whether someone is standing or sitting, how often they go to the bathroom or when they open their refrigerator.

On the other hand, someone must operate active technology. That means pulling a cord to request emergency response or sending data about medication use to a doctor.

However, for full-scale adoption and growth of in-home healthcare tech, companies may need to follow a standard to reduce fragmentation and provide interoperability.

There is some movement in that area already. In 2019, Amazon, Apple, Google, Samsung SmartThings and the Zigbee Alliance announced the collaboration and formation of the working group of Project Connected Home over IP, which was renamed “Matter.” The project’s goal is to simplify development for smart home product brands and manufacturers while increasing the compatibility of the products for consumers, said Jonathan Collins, research director for smart home and smart health at ABI Research.

Many homes already have smart systems that adjust temperature, lighting and security to match the user’s schedule and behavior. A transition into connected healthcare is already underway.

In such cases, Collins said, “there’s energy savings, there’s security, there’s all sorts of benefits that come from bringing a home onto the network.”

For example, a dialysis machine or sleep apnea device captures data about the patient’s health; when connected, it can automatically share the necessary information with physicians. Health insurance companies that are, in some cases, reimbursing the cost of at-home devices when data is used by a doctor are interested in this technology.

Thus far, however, Collins said, the elder housing market isn’t necessarily at the cutting edge of adopting intelligent systems, although some care homes are. Looking long term, the individual home may become a full-sensing environment with technology that’s just as ubiquitous as modern power and plumbing.

“Like electricity and running water, it will find its way into all homes eventually,” Collins said.

Where the electrician comes in

The common requirement is connectivity, and that’s where electricians and integrators come in. A sensing environment in the home requires infrastructure, and that can be a complex demand.

“Consideration would need to be made for not just what sensors can do today, but what their longevity is,” Collins said.

Already, Amazon’s Echo with Alexa is compatible with many devices, including video cameras. In some cases, family members install cameras that keep an eye on their loved one. Remote users can simply check the video feed to see, in real time, if the resident is OK.

However, just because technology is possible doesn’t mean it will be adopted. For example, not everyone wants cameras in their homes.

“In fact, barely anyone wants a camera, and certainly not a camera that’s not under their own control,” Collins said.

Other options involve less-invasive technologies. Systems can provide Wi-Fi or RFID sensing that leverages radio waves to detect whether someone walked in front of a router or gateway. Machine learning and artificial intelligence enable some devices to analyze gaits and recognize who someone is based on their step, as well as identifying when their gait has changed and may need help.

Technology also offers companionship. Companies such as Intuition Robotics have devices that deliver medication advice to people living alone, ask questions to check on mental well-being and provide some companionship.

Contractors have to future-proof the systems. Try to install a universal system that accommodates can work for different users.

“If you install something for an Alexa user and someone else moves in that wants Google, then the initial system is wasted,” Collins said.

Contractors could put themselves in a position of integrating solutions for this particular market and provide retrofits.

“It’s a huge opportunity, because it’s an underserved market,” he said.

Technology companies are already taking steps to bring previously unconnected devices into networks. Matter is a step toward addressing such challenges by streamlining system offerings.

Meanwhile, Omron Healthcare makes healthcare devices for the home. A variety of trends has led companies to think in a connected way, said Carol Lucarelli, executive director of marketing and e-commerce at Omron. The aging population, emergency room overcrowding and the pandemic have all pushed the market in this direction.

“People are asking, wouldn’t it be great to have some of those same tools at home that your healthcare provider is relying on?” Lucarelli said.

“We’ve seen an increase in the number of connected devices that we put into the marketplace,” Lucarelli said. “The idea of the app is to track all of the information, and then you can share that directly with your doctor from the app.”

A year ago, Omron launched its first remote patient monitoring service called VitalSight, which is specifically designed to help people with uncontrolled hypertension. It takes blood pressure readings and automatically uploads the data directly into the patient’s electronic medical record.

A patient could, for instance, run a report on their own blood pressure readings, send a PDF or even a daily update to a doctor, who can look at the readings remotely and make them part of the patient’s record.

As more connectivity takes place, security is going to be a front-and-center priority, Lucarelli said. Omron is planning for that with HIPAA compliance and encryption included in the cloud to secure the data.

Going forward, “companies need to safeguard that data,” she said.