The Digital Farm: Connectivity and IoT are transforming modern agriculture 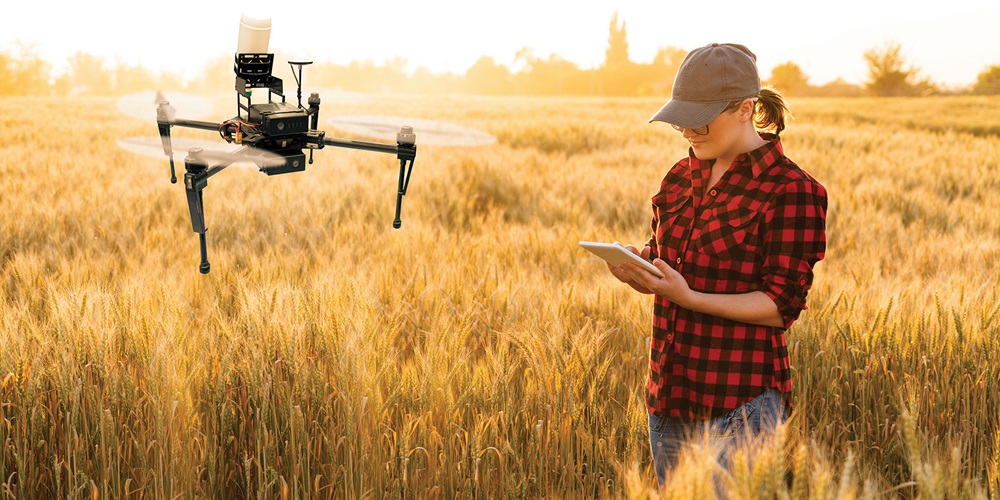 A century ago, the industry changed when farming became mechanized. Another transformation is happening now as farms become digitized to make them more productive, sustainable and resilient in a changing climate. To ensure access to real-time data, electrical contractors are positioned to provide connectivity infrastructure, technology installation and support.

Today, wireless technology and the cloud are bringing the physical realm of farming into the digital world. Whether that means sensors tracking soil conditions, drones taking pictures overhead, weather forecasts or farming equipment that “talks to the cloud,” farmers are looking for connectivity.

The smart agriculture market revenue is going to reach $15.3 million in the United States by 2025, according to Zion Market Research, New York. A study by Insider Intelligence, New York, found there will be nearly 12 million agricultural sensors installed around the world by 2023. IBM, Armonk, N.Y., has estimated that the average farm could generate half a million data points every day, which will help farmers better manage their yields.

A need for better connectivity

A lack of necessary bandwidth is a real challenge to this transition. For electrical contractors, that means support is needed to help connect rural areas with Wi-Fi and cellular networks, while ECs in the integration space can help set up an interface between a plant’s physical conditions and other data and a virtual or digital twin that helps farmers make decisions.

Some companies have begun offering the tools to first take “The Old Farmer’s Almanac” to the digital age. The Climate Corp., San Francisco, and Digital Farming (both divisions of Whippany, N.J.-based Bayer), are capturing weather data and helping farmers apply that to the specific needs of their fields, including measurement and analysis of their topography, soil moisture and fertility treatments.

The Climate Corp. offers ways to further leverage data. The first piece the company released was FieldView in 2015, through which a grower could see satellite images and maps of their fields. Farmers saw immediate benefits.

“We were surprised how valuable it was to a farmer just to have digital view,” said Molly Elrick, director of the Science Enabling Team at Climate Corp. She said the company found its customers realized value in a single source of digital information. The company then expanded its offering to provide recommendations, including the Seed Advisor, which suggests planting densities.

The Climate Corp. has customers in the United States, Canada, Argentina, Brazil, the European Union and the Asia-Pacific region, with systems tracking 180 million acres. Data comes from sources including sensors on farm equipment. Farmers, however, require a reliable connection to gain value from the technology, and connectivity continues to be one of the greatest obstacles in rural places around the world, Elrick said.

“If you can’t stay connected and you can’t load in real-time, you end up with gaps in the data or inaccuracies.” It’s a rural-versus-urban challenge, she said, and “that’s a passion point for us.”

Connected farmers can gain a new view into their fields, including information such as: “What did I plant, when and where? In what density?” Data from vehicles can also answer questions such as, “Did I spray, how much and when?”

Drones have been one of the most valuable tools, Elrick said, capturing information that identifies and even diagnoses problems in a field. A pilot project in Asia uses drones to detect troubled areas and provide the response such as spraying insecticide in an area with an infestation.

Semtech, Camarillo, Calif., offers LoRaWAN (long-range wide area networking) connectivity for agricultural sites, which provides another way for intelligence to migrate from the fields to the internet. ICT International, an Australia-based wireless measurements company, relies on such long-range or narrow-band cellular connections. For the past 40 years, ICT has offered plant physiology devices to monitor conditions around crops and trees, said Peter Cull, the company’s director. In recent years, that offering became wireless and opened up opportunities for new companies, such as those seeking carbon credits.

ICT’s sensors measure water movement velocity through a plant’s stem, analyze field or orchard health and make forecasts. The sensor data is transmitted to an ICT gateway and then to the cloud through a local service provider network. In the meantime, the connectivity comes from Semtech’s analog and mixed-signal semiconductors, along with algorithms for environmental applications, according to Marc Pegulu, Semtech’s vice president of wireless and sensing products group. The technology leverages LoRaWAN to transmit small packets of data at a long range, using a minimal amount of power.

“We started by putting in a weather station that is used every day now,” Keates said. “Soil moisture sensors are in a number of strategic positions,” across 250 hectares, to show the effectiveness of irrigation or rain.

The Cat M1 sensors are solar-powered and send data wirelessly to the cloud. The farm can then view the data and make decisions without standing in the field’s center. Today Hitachi Vantara’s technology is used around the world.

WaterBit is a Milpitas, Calif., startup that has yielded $11.4 million in funding to build an autonomous irrigation solution to assist produce and nut farmers. The company’s product includes a solar-powered device that connects sensors and probes in the field to identify water delivery at the micro level. Another device is the WaterBit Block Value Controller, which turns the irrigation system on and off based on input from the WaterBit Carbon device.

ETwater, Novato, Calif., has developed a cloud-based system that can automatically control watering schedules according to plant types, microclimate, weather forecasts and other data inputs. The ETwater Smartest Sprinkler Service comes with a smart water controller gadget, wireless network connectivity and flow controls. All data from the system is accessible with a smartphone.

Growing populations and changing climates—which cause longer droughts, increased pests and other challenges—are accelerating the movement into digital farming. Every solution will require support from companies that provide, install and integrate the technology.

“I think the digital ag industry is a huge opportunity,” Elrick said.

For more from the horse’s mouth on this topic, read “Newfangled Farming” by Jeff Gavin in the October 2020 issue of Electrical Contractor.