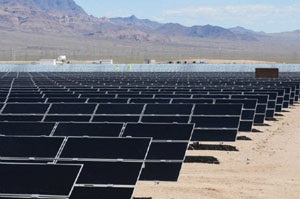 Pacific Gas and Electric Co. (PG&E) and Sempra Generation, a subsidiary of San Diego-based Sempra Energy, announced that they have entered into a 25-year contract for 150 megawatts (MW) of renewable power from an expansion of Sempra Generation’s Copper Mountain Solar complex in Boulder City, Nev.

First Solar, a producer of photovoltaic (PV) solar modules, will provide the ground-mounted thin film panels and serve as the engineering, procurement and construction (EPC) contractor for the solar project.

The first 92 MW of solar panels at Copper Mountain Solar 2 are expected to be installed by January 2013, with the remaining 58 MW slated for completion by 2015. Under the terms of the contract, PG&E has the option to accelerate the commercial operation date of the second phase.

Construction on the 1,100-acre solar plant is expected to begin in early 2012. Copper Mountain Solar 2 will produce enough zero-emission electricity to power about 45,000 homes when fully developed.

Sempra Generation and First Solar previously teamed up on the construction of two other large-scale solar projects in Nevada, including Copper Mountain Solar 1. The 48-MW installation was completed in late 2010 and is currently the largest photovoltaic solar power plant in the United States. PG&E is currently delivering the power produced at the plant to its customers.

The power supply contract between Sempra Generation and PG&E is subject to approval by the California Public Utilities Commission.

“Copper Mountain Solar 2 is another exciting step forward on our plan to construct 1,000 megawatts of additional renewable capacity by 2015,” said Jeffrey W. Martin, president and chief executive officer of Sempra Generation. “We couldn’t be more pleased to move forward with PG&E and First Solar on our third and largest solar project in Nevada, which will deliver a new supply of clean power to California consumers.”