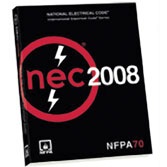 The 2008 National Electrical Code (NEC) was approved in June at the annual meeting of the National Fire Protection Association (NFPA) in Boston. Significant revisions to the 2008 NEC include the following:

Revision of the NEC and other NFPA standards is a three-step process. Change proposals are submitted and considered by the 20 Code-Making Panels (CMPs) responsible for different articles (short chapters) of theNEC. Next, public comments are submitted to the CMPs. Last, a new edition of the Code is approved at an annual meeting of the entire association.

Typically, there are a number of appeals on the floor of the NFPA annual meeting, requesting last-minute revisions of the NEC. NFPA adopted new procedures this year to streamline this process. At the annual meeting, 38 amending motions were presented, only eight of which were approved.

The 2008 National Electrical Code will be published in September. This allows time for training and study before jurisdictions began adopting the NEC for regulatory enforcement in January 2008, using it in their contractor licensing exams, etc.

For more information on important changes and updates in the 2008 NEC, see “Significant Changes to the NEC 2008."    EC