When to Call in the Big Guns 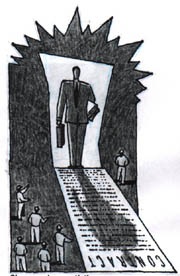 Contracts are drafted by committee. The group always includes an attorney who may or may not give practical considerations to the language drafted. That language, however, is of paramount importance to you.

So what do you do when confronted with a book of terms and conditions? Ignore them? Try to reason through what the clauses say? Call your attorney?

Large electrical contractors have on staff in-house counsel to review/revise contract proposals, commercial terms and other legal issues concerning the contract. Small to medium-size contractors do not have that luxury.

I represented an electrical contractor who became my client after he had agreed to a standard AIA subcontract form, with 26 pages of modifications. That contractor should have sought legal advice before signing the contract.

Ordinarily, the contract terms will be bland. You should look for the red flags. Among them are:

• No damages for delay

• Anything relating to “consequential damages”

ENR, a national publication, did a survey asking contractors what they thought were the primary causes of disputes. You should ask yourself that question based on your own history. In the survey, it was not surprising that the top 10 reasons were universally acknowledged. What was unnerving was that, despite this information, few of the contracts addressed those issues.

The law has created a number of “privileges.” The rationales can be debated, but the fact is that they exist. Attorney/client and “work product” are the ones to be discussed briefly here.

Generally speaking, the attorney/client privilege bars an attorney from disclosing communications with his client where the client is seeking or receiving legal advice. The idea is to permit the client to speak freely with its representative without fear that the conversation or correspondence will be used against the client in court or anywhere.

How does this concept apply to you? Let’s say that during performance, you encounter a variety of problems, some of which you think may be your own fault. You prepare internal memoranda about these problems, or your foremen expound on them in their logs. All such information may be subject to discovery by an opposing party if there is litigation.

A drug company was under investigation for bribery. Its general counsel prepared and sent a questionnaire to the company’s regional managers essentially asking them to disclose who they bribed. When the Justice Department found out about the questionnaires, it asked for copies.

The court decided that the communications were privileged and allowed the drug company to withhold them from the government. Sensitive documents can in some cases be protected from broad disclosure rules.

Pricing a change order can be a challenge. Putting a time extension to the change can be daunting. Aside from these technical details, there are also legal implications. For example, some “standard” change order forms state that the change, once accepted by the owner, covers all costs associated with the extra work and all other terms of the contract remain unaltered.

In the past, contractors would add language to the change order reserving “impact” costs and time. Does that do any good? With the federal government, any reservation of rights language needs to be carefully considered. Extended home office overhead, for example, is considered to be captured by the overhead mark-up in the change order.

Construction contracting requires a working knowledge of the law. When in doubt, at least read the documents you are signing, If there’s still doubt, ask a contracts attorney for guidance.

Recently, I have been seeing partial release forms that also release all claims, extras, impact costs, etc. and courts have upheld the validity of these documents.

What “notice” clauses are in your contract? Did you send timely written notices? Do you have a “pay when paid” clause? No damages for delay? A broad indemnity clause?

Who caused your problems? The construction manager? The architect? The owner or general contractor?

If you are a subcontractor to a general, can the general contractor pass your claims through to the owner? If so, how do you draft the “pass-through” agreement?

What are the exceptions to a “no damages for delay” provision? To the “pay when paid” clause? To the written “notice” requirements?

There are fine claims consultants available, but they cannot testify to the law. And there are excellent attorneys in practice who do not understand construction claims.

A hard negotiations question is whether and when to let the other side know that you have retained a professional for assistance. In some instances, the appearance of an attorney is a death knell to negotiations; in others, the attorney can open doors. There is no one answer except that having counsel as a silent partner does not hurt your cause. Where litigation proves necessary, your counsel will not be starting from scratch.

Managing the contract these days is as important as managing construction. State and federal laws and regulations directly affect your company, whether or not you are aware of them. Case law is equally important for you to understand, with its implications to your contract and to your actions. Seminars on these issues are a contribution to your management abilities. Advice from counsel is extremely important. EC