Unlike Any Other: Miller Electric reckons with an unusual art gallery expansion 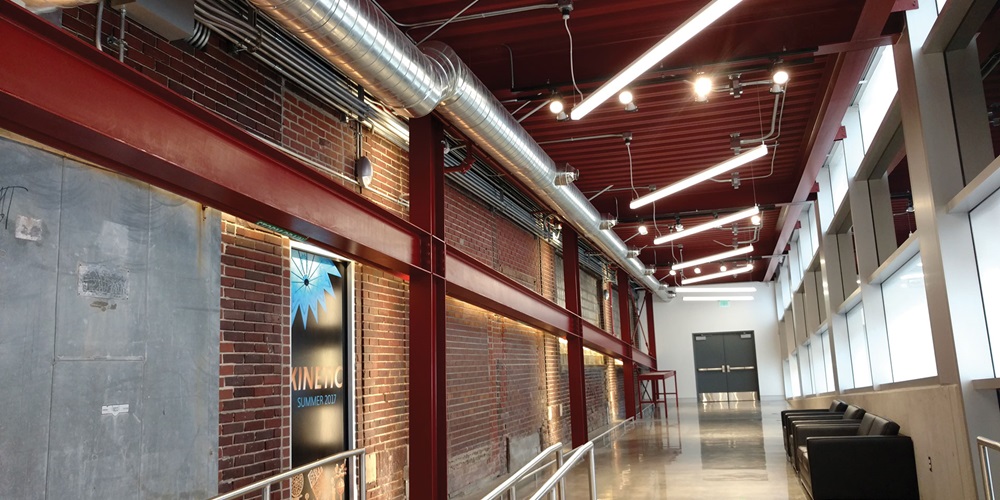 No two construction projects are exactly the same, but many aspects of an electrical contractor’s work encompass some of the same basic elements that are common to other projects.

Miller Electric Co., Omaha, Neb., recently completed a project in a building with an unusual design that posed challenges not often encountered, bringing the company into a role of working closely with designers and the project owner.

The Kaneko Gallery in Omaha’s Old Market District is owned by ceramic artist Jun Kaneko and his wife Ree. It houses many of Kaneko’s works as well as creations by other artists and frequently hosts impressive traveling exhibits.

The original building on the site was commissioned in 1906 by the Fairmont Creamery Co. but was gutted by fire a year later. Its replacement, from which today’s gallery has emerged, served for a time as a Fairmont ice cream plant.

“In the world of commercial electrical contracting,” Love said, “we are accustomed to working on buildings that are plumb and square. Wiring the new street atrium of the Kaneko art studio was a departure from the norm. Everything from the steel and framing to the windows and decorative new facade was built off-level. Even the ceiling is angled. Pipe, pipe racks and fixtures are visible. The project’s design specified the conduit would be exposed but not be obvious or distracting. Hanging decorative 8-ft. lighting fixtures presented a coordination and measurement challenge for our engineers and electricians. We welcomed the opportunity.”

Joe Pecha, who did much of the lighting work, said achieving the desired visual effect required “hiding” elements that would be in plain sight.

The creative use of light was a key element of the building’s design, he said. For example, accent lights were installed on the beam pockets outside and inside the atrium building, drawing attention to the brick, stone and concrete to incorporate a modern look to the old building.

After installation was completed, Love said, the lights flooded too much into the street, which meant they needed to find a way to deflect the light. Miller Electric contacted a local steel fabrication shop to engineer and fabricate perforated aluminum panels that reflected the light and created black-and-white circular patterns on the stone and concrete below that produced the image of the Kaneko logo.

“The lights on the inside shining out also create an amazing circular pattern,” Pecha said. “Light coming from the windows creates a circular pattern that changes size with visual characteristics that must be seen in person to appreciate.”

Another challenge was tying the electrical and mechanical wiring for the addition into the existing building. The two buildings were built more than 100 years apart, and the older building has settled while the newer one has not.

“Planning core-drill and stub-up locations was a tedious task because of the angles of the new building in comparison with a level and plumb existing structure,” Love said.

Main pipe runs, panel assembly and a visually impressive data pipe run were prefabricated, saving time and money and improving safety because all the repetitive work was done in the prefab shop instead of the job site.

Miller Electric’s prefab facility has 10,000 square feet of space for its 20-person team to cut, thread, bend, assemble and wire prefabricated pieces made for specific projects and job sites.

“Currently, we’ve identified nearly 100 unique assemblies comprised of thousands of individual parts that we make in our prefab shop. Those items range from receptacle and junction boxes to transformers and light fixtures. Our shop has successfully used BIM to prefab pipes and to become the only local company UL-listed E466157 for wiring assemblies and data center floor whips,” Love said.

“What really set this project apart was working with the architects who designed the project, the artist/project owner and suppliers to design, build and achieve the creative and functional goal of the new lighting,” Love said.