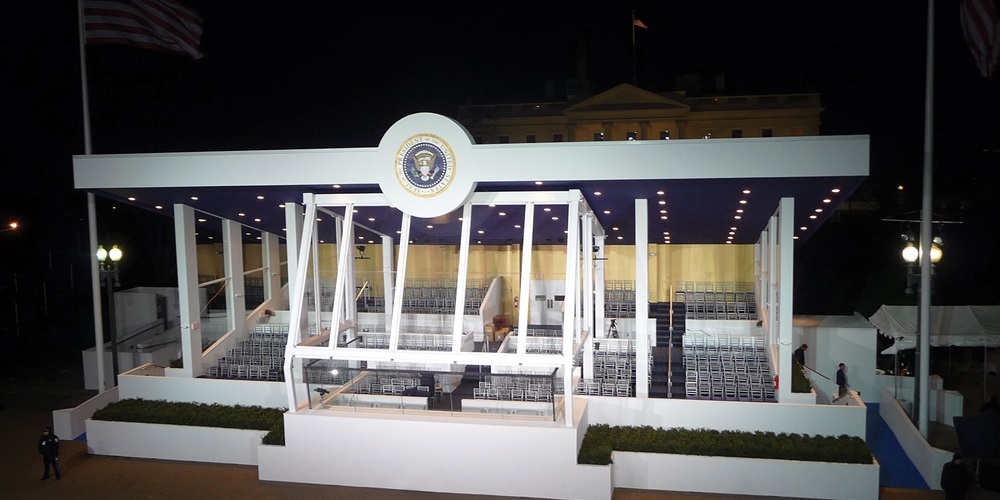 Richard Nixon’s second inauguration in 1973 was the first time Heller Electric Co. Inc. provided the lights and power needed to operate the reviewing stand on Pennsylvania Avenue. Since then, the company has powered every new and returning president’s first speech to America.

And serving the needs of high-profile events and concerts in Chicago’s Northerly Island Park, Taylor Electric has been ensuring the lights, sound system and food storage seamlessly enable some of the city’s most spectacular outdoor concerts.

A different kind of expertise is needed to supply power where it doesn’t typically go. Contractors around the country are providing systems for large and small events, but in each case, the challenges can be similar—get the power in quickly, make it look like it was always there and take it down again in a hurry. For many contractors, it means recurring contracts at sites where equipment, such as cable and generators, must be on hand or easily accessible, and staff must stand by through an event to prevent or respond to any issues.

Heller Electric provides some of the highest profile temporary work in the country by supplying installation services at the executive level. For the past 45 years, the company has provided power for each new president and his entourage, as well as the press and the mayor of Washington, D.C.

In fact, Heller Electric has a new generation at the helm that continues to provide its services for the fast-paced installations.

The different inauguration sites come with temporary structures that are stored in warehouses for four years before being re-installed in January for the latest president or term.

Heller supplies the presidential stand with an 800-ampere (A) temporary service for heat, heated walkways and all HVAC on-site, as well as heated seating. Then, of course, there are 75 downlights, the aesthetics of which must be appropriate for the pomp and circumstance of the televised occasion.

The work begins in November just after the election. Several days are dedicated to erecting the steel structure using temporary foundations on Pennsylvania Avenue and then supplying the power for the January 20 event. Each time, all new fixtures and electrical equipment are installed.

The presidential stand has changed over the years, and President Trump and his family may have been more comfortable in 2017 than the Nixons were; chair warmers were added to about a dozen of the 250 seats in the reviewing stand. Bulletproof shielding was added after Sept. 11 to provide greater security. With those bulletproof enclosures, it became necessary to add HVAC so the glass would never fog up in the cold or wet January weather. The HVAC feature has proved to be popular for those who sit in the reviewing stand. While it may have been intended to prevent bad optics, it’s a matter of comfort for today’s presidential parties.

The HVAC system includes electrical wall heaters. While the reviewing stand may not be toasty, the system ensures temperatures never dip below 50 degrees.

The lighting updates each event simply because the technology keeps improving, Heller said.

Directly across the street from the presidential reviewing stand is the four-story media building from which reporters cover the event. The wooden structure requires a 1,200A service.

The media does not have heated seats or other luxuries. However, they get lighting and power for their cameras and computers. Filming takes place on the building roof.

Like the presidential viewing stand, the structure and needs have changed over time.

“They used to come on-site with typewriters,” Heller said.

Today, it’s laptop computers, cellphones and the demand for reliable access to the internet. The company works with Verizon to get phone lines to the people who need them. Heller has most recently provided 250 ground-fault circuit interrupter receptacles for general use by media outlets.

Most major networks broadcast the event live from the roof of the structure. To power the specialty lights that are needed for this task, Heller brings temporary service to the roof. Each time, Heller works with Pepco, the local utility, for the temporary feeds from coil cable removed from nearby manholes.

The mayor’s stand is a smaller facility—a wooden structure heated using electric baseboard heaters with local control for each guest. The structure takes only two or three days to install.

When the event is over, the feeder cable is returned to underground storage in front of the White House.

For Heller’s part, the company has a well-trained inaugural crew that takes on this specialized task. The generations have changed among the crew as well, with the original electricians on-site training their replacements.

During construction, the crew peaks at about 12 to 14 electricians across all three projects.

One of the biggest challenges is the 75 recessed lighting fixtures (high hats) that are installed in the sloping ceiling of the reviewing stand. There is a limited amount of time to install the lighting, so the company must do the planning and roughing in well in advance before the scaffolding is in place. They then typically send 15 electricians to the site to get lights in place so that they are positioned in a perfectly straight line from any angle.

The electrical crew must also contend with a short timeline and, of course, the weather.

“They don’t give us weather delays,” Heller said. He still remembers President Obama’s first inauguration in 2009 where the entire 20 days ahead of the event required working in a cold, soaking rain.

Electricians must gain secret service clearance and then must complete a briefing and debriefing—which is another reason the company uses the same electricians from past crews, adding only a few new electricians with each event.

Because the inauguration happens only every four years, there is plenty of time for electricians to forget the work they did before. There is still a learning curve, Heller said, and this is why the returning crew needs to be highly experienced. Some of the electricians on-site, in fact, have done the work as many as five times.

It was so cold in 1985 that the paint they provided for the fixtures was freezing as they put it down. The men were painting stars around each light with brushes, but the work wasn’t fully seen by the television audience. It was so cold the parade was cancelled.

For the 2017 inauguration, the crew converted all lighting to LED fixtures. That took some pressure off the contractor because of the relative reliability of LEDs.

Heller remembers attending presidential inaugurations with his father growing up. They used the pass they received for each event, and he recalls his father worrying about a bulb burning out. It’s a concern he now understands.

“One of my biggest fears was burned-out light bulbs,” he said.

During a much warmer season, Northerly Island—a manmade peninsula along Chicago’s Lake Michigan shoreline where Meigs Field Airport once stood—serves as a summer concert destination. The park is 91 acres with an outdoor concert venue, now known as Huntington Bank Pavilion, which has been operated by Live Nation every summer since 2005.

The concerts vary in size, and some performers draw larger crowds. For example, Peter Frampton, Luke Bryan, and Slightly Stoopid, to Miranda Lambert, Ben Harper and Dave Matthews Band have performed there.

“You can’t build anything permanent,” said Anthony Sage, Taylor’s general superintendent. So, instead, crews bring generators on-site with as many as a dozen or more units powering all of the concert lighting, including stage lights and the power needed by the food, beverage and other concessions vendors.

“We work with Sunbelt Rentals and tap into a ComEd service,” Sage said. Typical venues serve an audience of 5,000 to 8,000, but numbers can get considerably larger. The Nickelodeon Slimefest, for instance, is part concert, part slime party for more than 10,000, and country music event Country Lakeshake draws about 30,000 people.

“We typically set up at the beginning of the season and then maintain and expand services for shows throughout the season,” Sage said. Each summer there may be about 30 different event dates.

To accommodate, Taylor has a team of dedicated electricians that spend summer days and nights working, meeting the electrical needs for each show and staying on-site to address any problem that could arise.

Generators can fail, so typically five or six electricians need to be accessible to work around the clock. Sunbelt provides the generators, from eight to 10 for a typical event and up to 20 for the larger events.

Because refrigeration is critical for the food trucks and other vendors, Taylor also maintains those generators and the fuel supply to them.

Taylor runs cable to temporary transformers for lighting, sound and power for the stage. Light towers provide outdoor lighting for the audience as well as the stage lighting for performers.

The performers bring power requirements of their own.

“When performers come in with buses, we plug in the power for their buses; we can handle up to six buses during a regular show,” Sage said.

Taylor grounds the stages and grandstands—an important feature in the stormy summer months of the Midwest.

Grounding is necessary for human safety at the events as well as to protect the electrical equipment. The 2019 summer season has been especially rainy, which doesn’t stop the need for reliable power.

“We need to make sure we keep cable and connections safe from water,” Sage said, adding that GFCI-protected circuits serve the electrical equipment and are regularly tested and maintained.

That doesn’t mean the equipment plugged into the power isn’t prone to problems. Vendors on-site are not always aware that plugging in floor-warming plates, space heaters or other cooking equipment can damage the system.

“It’s our responsibility to ensure vendors have their equipment set up properly,” Sage said.