Taking the Suspense Out of a Suspension of Work 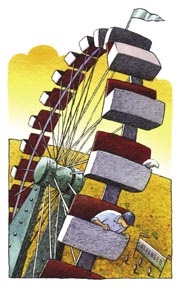 On almost every project, large or small, there will be minor stoppages of all or part of the work.

Many of these predictable delays are not significant enough to support a delay claim. For example, you have to shift your crews one day to accommodate the mason. Or the work stops because the owner is doing a walk-through. Or an accident at the site shuts down the work for an OSHA inspection.

Not only are these problems relatively insignificant, but the project schedule is supposed to have taken these predictable delays into account.

There are instances, however, where the delay is so severe that you are motivated to read your contract to determine if you have a remedy aside from a lawsuit for breach of contract. One of the clauses you should consider is the “suspension of work” clause.

Modern contracts often provide a variety of clauses to choose from in the event of a delay or disruption to the work. There is the “changes” clause, “force majeure” clause and, sometimes, a “suspension of the work” clause. Typically, the changes clause is the broadest, as it allows for an equitable adjustment to the contract.

Translated: You are permitted to recover cost, plus mark-up for overhead and profit, in addition to a time extension. Under the AIA A201 conditions of contract, disruptions, differing conditions and other delay events are expressly covered by the changes clause.

The “no damages for delay” issue arises with force majeure, loosely translated as an act of God (fires, earthquakes, war, unusually severe weather). As neither party is responsible for these unforeseen occurrences, neither party can recover damages from the other, no matter how extreme those damages may be.

In the middle is the suspension of work clause. That provision allows for recovery of costs, plus overhead, and a time extension, but no profit. How do you decide which clause applies? Is it possible for all of the clauses to apply?

The Army Corps of Engineers wanted to expand a hydroelectric power plant and awarded a contract for the project. A lawsuit, brought by an environmental group, stopped the project for a year.

The Corps, for its own reasons, had separately contracted with the major suppliers.

When the project re-started, the suppliers were unable to deliver on the Corps’ schedule, as adjusted for the work stoppage, because they were backed up by other orders. The original manufacturing schedule had been modified simply by shifting the start date of the project by 12 months.

The contractors were not aware of this planning error, and now there were resequencing costs, delays, productivity losses, etc.

The environmental injunction that delayed the project was probably a force majeure event. The length of that stoppage may also have justifiably supported an abandonment by the contractors. Once the injunction was lifted, the Corps delayed further in issuing a notice to proceed, as it was reviewing the original design. That delay probably fell under the suspension clause.

Ensuing problems caused by owner-supplied equipment was covered by the changes clause. The instruction here is this: You need to review your entire agreement to determine where you have rights.

What is a suspension?

In contract law, there are actual, real things and there are “constructive” things. The same is true with suspension. A “real” suspension occurs as follows:

“The Contractor shall, at the written order of the Construction Manager, suspend the progress of the Work or part thereof ...”

A variation: “The Owner shall have the authority to suspend the Work, in whole or in part, for such periods and such reasons as it may deem necessary or desirable ...”

Clauses like these give the owner significant power over the progress of the work. As a result, the courts tend to limit the application of such clauses to allow for justified extensions only for a reasonable time.

In many instances, though, a work stoppage occurs without a written order. For example, there may be a delay in approval of shop drawings that adversely affects work progress. Or, the contractor is waiting for revised drawings or a change order, or the utility company finishes later than planned. These are “constructive suspensions.”

Generally, the same rules apply. Unless the contract provides otherwise, the contractor is not entitled to compensation for a reasonable time of justified suspension, and after that time, may be entitled to added costs, but not profit on those costs.

“[T]he Changes clause ... will have no application for any delay prior to the issuance of a change order. An adjustment for such type of delay, if appropriate, will be for consideration under ... the Suspension of Work clause.”

What does this clause mean? Let us say your work, or part of it, is stopped for two months while you are waiting for a change directive. The change order comes and the added work requires an adjustment of 30 days to the schedule. You now have 90 days of delay (2 months waiting, 1 month added).

What you should do

All delays are not treated equally. For some types of delay, first read your contract to see if it has a suspension clause. If one is there, follow the contract’s notice requirements to preserve your rights. Some clauses require you to notify the owner of the effects of the work stoppage.

Then, check to see whether the delay might fall under another clause as well, such as the changes or extras clauses.

Once you know the basis for any claim you might make, you must analyze the effect of the suspension on your schedule and on your project costs. One of the techniques for this analysis is through the use of a CPM (Critical Path Method) schedule.

Where a job does not justify use of a CPM, a simple bar chart can be used. In either case, some form of schedule comparison can help you sort through the delay events and allocate them to the appropriate clause.

Assembling a claim takes a lot of effort. Don’t waste your time and money by basing your claim on the wrong contract provision. EC