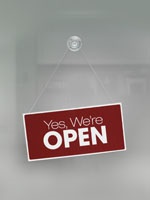 Owners of small- and mid-sized businesses across the country are feeling optimistic, citing increased hiring and profit growth among key 2011 business predictions. These were among the results of the first semiannual survey of business owners conducted nationally in November 2010 by Prepaid Expense Card Solutions Inc., provider of the PEX Visa prepaid card for business.

“What we noted in the survey’s results mirrors the anecdotal evidence we’ve gathered from conversations with our clients, specifically that 2010 has thus far been better than originally expected, and economic and business optimism is trending in a positive direction for 2011,” said Toffer Grant, CEO and founder of PEX Card. “America was built on the backs of small- and mid-sized businesses. They are the engines that will power us back to a secure economic footing, which is why their opinions are a strong indicator of the financial future.”

When asked whether their 2010 business performance has shaped up to be better or worse relative to their expectations at the outset of the year, 71 percent of respondents noted “much better” or “somewhat better than expected.” Just 4 percent of business owners answered “worse than expected.”
Asked to rate on a 1–10 scale (10 being the most difficult) how hard it has been over the past year to maintain adequate cash flow for their businesses, 48 percent of owners ranked between 6–10, the “most difficult” end of the scale. Twenty-seven percent fell into the “least difficult” category, with rankings of 1–4.

Turning to 2011, respondents evidenced an optimistic outlook about their business performance, with 34 percent of owners saying they expected profits in the coming year to be “significantly better” than in 2010. Twenty-eight percent of respondents answered “slightly better” to the same question, and 5 percent noted “slightly worse.”

Not surprisingly, based on owners’ profit optimism, 59 percent said they planned to add to their employee count in 2011.

Questioned about what could be most helpful to America’s small businesses, more than half of owners (51 percent) said, “tax breaks,” followed by “easier bank lending practices” (31 percent) and “government stimulus” (13 percent).

Survey results are based on online responses from 81 small business owners nationwide.