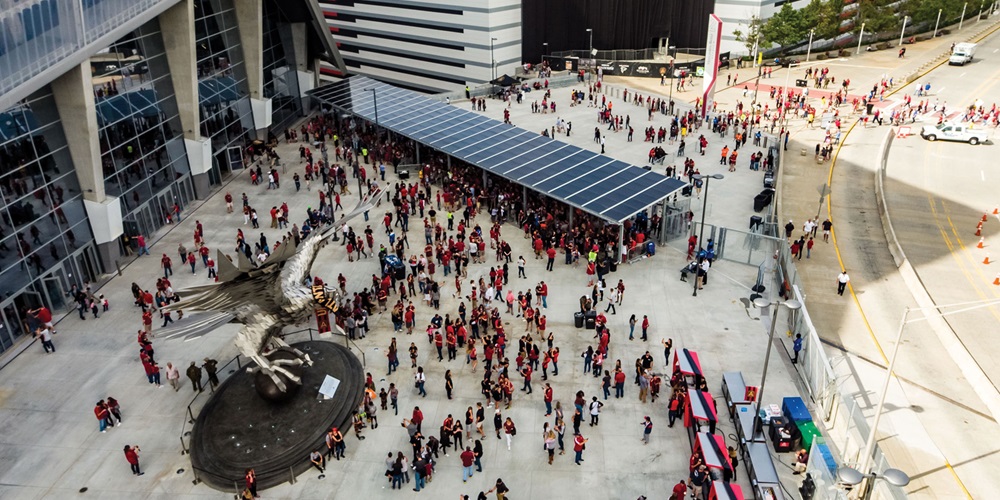 Sports and sustainability have teamed up. Not only are professional sports venues, campus athletic buildings and community recreation centers built with cost savings in mind and achieved through clean energy, energy efficiency and resilient construction, these buildings are hubs that stimulate additional project work both within and outside their walls.

The U.S. Green Building Council reports more than 30 LEED-certified sports venues are open (or opening soon) throughout the country. Examples range from American Airlines Arena in Miami, which recertified as LEED Gold, to newly constructed LEED Gold winners U.S. Bank Stadium in Minneapolis (see “Let Us Entertain You”). A number of venues are Platinum-certified, including the Golden 1 Center in Sacramento, Calif., and the $1.5 billion Mercedes-Benz Stadium in Atlanta.

Due to the interest and growth in sustainable sports facilities, the Green Sports Alliance (GSA) formed in 2010. Its mission is to leverage “the cultural and market influence of sports to promote healthy, sustainable communities where people live and play.” GSA membership today comprises nearly 600 sports teams and venues from 15 sports leagues in 14 countries.

“The sports industry is most definitely embracing sustainability,” said Scott Jenkins, board chairman for the GSA and general manager for Mercedes-Benz Stadium. “What we do in promoting sustainable building operation and environmental stewardship is noticed. Almost every professional team is a member of the alliance, including collegiate teams. We are seeing from them an intention to be environmental, to feature smart energy and serve the community.”

High-performance operation of a venue, while providing bottom-line savings in energy costs, can benefit a community in terms of water conservation, storm water management, green power, electric vehicle (EV) charging, smart lighting, recycling, eliminating food waste and public transportation. All of these help a city working to reduce greenhouse gas emissions. The alliance understands each community is different with its own goals and challenges. Today’s sports venues are finding the best way they can contribute.

“We deliberately sited Mercedes-Benz Stadium in the heart of Atlanta, specifically the more challenging west side, to help drive development in this underserved area for employment and commerce,” Jenkins said. “In fact, trade education and employment opportunities during construction were part of the redevelopment effort this new stadium represented. The Arthur M. Blank Family Foundation’s support helped us discover ways to serve the community during construction.”

The foundation tapped Westside Works, a long-term neighborhood program focused on employment opportunities and job training for residents of Atlanta’s Westside communities. The program’s Construction Ready track was used during stadium construction. At completion, 160 Westside Works construction graduates and another 300 Westside residents contributed to the build. Arthur M. Blank, owner of the Atlanta Falcons and Atlanta United, and co-founder of The Home Depot, said he wanted to make Mercedes-Benz Stadium “a catalyst for positive transformation and connection to the community.”

In areas of energy optimization, 4,000 solar photovoltaic (PV) panels were installed on the stadium site and surrounding campus (1.6 million kilowatt-hours [kWh] per year), about 10 percent of the facility’s energy consumption. Ten EV charging stations can power up to 48 vehicles simultaneously. Lighting, heating and cooling is metered and monitored. All-LED lighting uses sensors to read light levels, occupancy and interact with the HVAC, helping reduce energy usage by as much as 60 percent. LEDs have delivered a better quality of light, color, animation and high resolution on LED scoreboards and ribbon boards. Floor-to-ceiling glass and a retractable roof provide ample natural light. In sum, the stadium is projected to save 29 percent in energy use.

“We were also the first stadium to receive all the water credits in LEED,” Jenkins said.

To mitigate flooding dangers from the Proctor Creek Watershed where the new stadium resides, an advanced water-management system captures and slowly releases storm water. A 680,000-gallon cistern catches rainwater for reuse in a 1.1-million-gallon cooling tower and for landscape irrigation use. Green spaces, including an urban garden, also were purposefully designed for positive environmental impact.

The stadium features waterless urinals and water-efficient fixtures that, in aggregate, use 47 percent less water than baseline building standards (EPAct 1992).

Gillette Stadium in Foxborough, Mass., is the home field for the New England Patriots. Foregoing the green certification route but environmentally committed, the stadium has amassed a number of sustainable features since it opened in 2002. Its sustainability efforts were carried over to a sister construction project that followed.

Alternative power has been a hallmark effort that continues to expand, serving both Patriot Place and Gillette Stadium. Working with renewable energy partner NRG, the complex features rooftop and solar canopies providing up to 60 percent of Patriot Place’s power. The canopies also provide weather protection. Additional solar panels added to the retail rooftops in the South Marketplace have raised the output of the solar power system to 1.1 million kWh on average per year. In total, over 3,000 solar panels grace 13 building rooftops. Additional solar, wind and combined heat and power are all being considered.

“Leveraging a commitment of sustainability through athletics” is how David Newport, director of the environmental center for the University of Colorado Boulder (CU), encapsulates his university’s commitment to building and operating high-performance athletic facilities.

“When I came to the university 12 years ago, I had come from the University of Florida where I helped run a successful sustainability program closely aligned with the Gator sports program,” Newport said. “During my interview, I asked the athletic director why he was confident what I did in Florida would work on the Colorado campus. He said, ‘People don’t come for the football. They come for the community. Sustainability builds community.’ Building community is something I believe college sports excels in.”

Key features of the CU athletic building project include the indoor practice facility's 850-kW rooftop solar array, which produces more than 1 million kWh per year and supplies power for the entire facility (net-zero) and a 28 percent net gain of power used by other CU athletic facilities. Newport estimates 80–90 percent of clean power for the campus is produced by athletic program buildings. The newly certified facilities also feature variable-speed-drive mechanicals, LED lighting, daylighting and other lighting and building-control features to draw down load. In an added boon for ECs, Newport expects many of these energy-efficiency tactics to expand to more campus facilities down the road.

The campus also will build on the athletic department’s solar efforts with a plan to add 8 megawatts of solar capacity across campus over the next three years.

“We are engaged 100 percent with the city, schools and the county, so people can see what makes a circular economy that is resilient and with low environmental impact,” Newport said. “We practice zero waste, zero net water and zero pesticides, which we promote.”

The campus has its own cogeneration power plant, a 15-kV microgrid that will expand to include a submicrogrid serving as a test bed for research in grid resiliency and cybersecurity.

“High-performance buildings are just better planned, better constructed, and we are always recommissioning,” Newport said. “Our campus now has 10 LEED Platinum certifications because we raised the bar in how we build and how we collaboratively work with architects and contractors. By surveying CU fans, we found our environmental efforts are important to them and enhanced the profile of the university and our athletic department. Our values aligned. A side benefit: fans are actually less upset if we lose a game.”