So Why Here? A PQ investigation on a renovation project 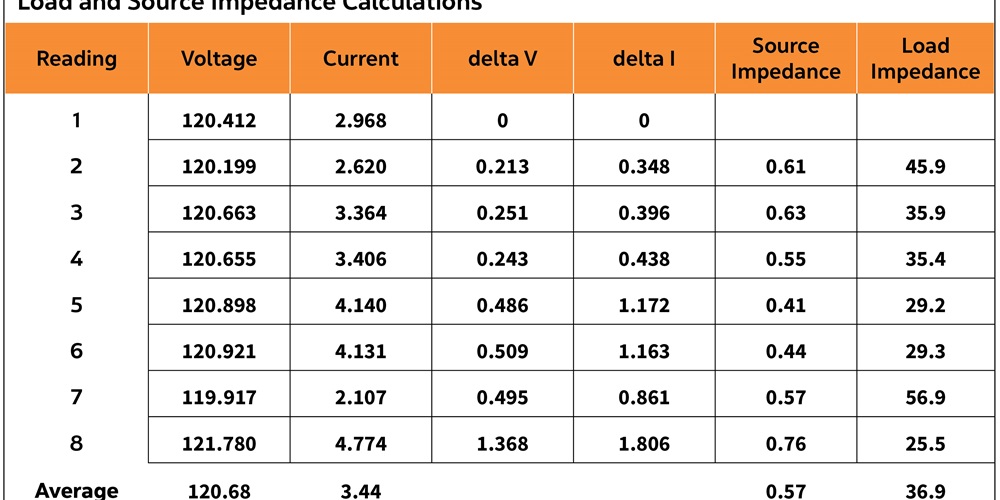 There were cabinet installers and electricians working at the site of a major kitchen renovation project. The cabinet crew had their power miter saw set up on the deck outside the family room adjacent to the kitchen. Every time the 12-inch saw was turned on, the six recessed lights in the kitchen went dim for a second and then came back a bit brighter. The light intensity was normal when the saw turned off.

The lights weren’t a safety hazard, but they were fairly distracting and led to a discussion with the electricians. The electrician was familiar with Ohm’s and Kirchhoff’s laws and the basic concept behind voltage sags, but his helper was not and wanted to know why the lights blinked so much in this house, while on other jobs it is barely noticeable.

Remember that it is the voltage drop across the source impedance when the current increases significantly that results in the voltage sag at the load, which in this case resulted in the lights dimming or blinking.

Answering the “So why here?” question, we have to look deeper into the source impedance, as the current increase from the power miter saw should be fairly constant if the blade sharpness is assumed to be a constant, and the thickness and density of the wood being cut is also a constant (crown molding in this case). The lower the source impedance is, the less the effect from the current increase, per Ohm’s Law.

Determining the load and source impedance is possible with a handheld current probe that also measures the voltage simultaneously. But it is much easier with an instrument such as a power quality monitor, where individual cycles of voltage and current can be captured at different levels and the cyclic rms value of voltage and current computed.

The table above lists eight cycles of voltage and current rms values (from a different site) where there isn’t a dramatic change, such as with miter saw startup. There is enough of a variation to make the calculations. An approximation of the load impedance can be calculated by dividing the rms voltage by the rms current, and a similar calculation is used for approximating the source impedance.

However, the delta, or difference, between two voltages divided by the difference of the two corresponding currents is used. One set of readings is the reference.

The difference of each subsequent reading is subtracted from the reference for voltage and current. Notice that we use the “absolute value,” which removes the negative sign that would exist if the second value is larger than the first.

Once the subtractions and divisions are complete, take the average of the seven delta values to get the approximate source impedance. In this example, the value is 0.57 ohms.

Generally, we like to see the source impedance on a residential 120V branch circuit to be less than 1 ohm, preferably less than 0.5 ohms. If we look back at the effect of the miter saw, let’s assume that the inrush current the saw caused is 20A for a few cycles, before a running current of 12A. If the source impedance was 1 ohm, that would mean the lights would see the 120V drop to 100V initially, enough to make a noticeable light output change. Even the 108V during the running state would be noticeable. However, with a source impedance of 0.4 ohms, there would only be an instantaneous drop of light output and a barely noticeable decrease during the running state.

The calculation is only an approximation, because it doesn’t take into account phase angle between voltage and current, and it varies depending on where the measurements are made and what the loads are.

While we often make the calculation from measurements at the point of common coupling (where the main service breakers are), it is sometimes a useful exercise at the point of utilization, as it can find circuits with connections needing to be made tighter, too long of a run or too small of a gauge wire for the loads. Though it does involve some simple math, it can have a big payback when too high of a source impedance causes a piece of critical operation equipment to trip offline in an industrial or commercial facility.