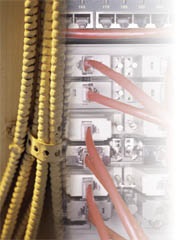 Most people probably think the term “building renovation” is reserved for “This Old House” or historic-preservation showcases—a once-grand downtown theater. They’re important projects but make up a small part of the renovation sector. For many electrical contractors, renovation construction involves upgrading fairly new buildings in areas such as retail and healthcare. In fact, there’s not much old-building stock standing. Most will get torn down or has been already razed. It’s estimated that fewer than 10 percent of all U.S. buildings built before 1940 remain and that percentage is dropping.

Running out of space

Bob Kohlmeyer, owner of CRK Contracting in Kings Park, N.Y., said renovating buildings makes up half of his business. CRK, which started in 1985 and carries about 15 journeymen, specializes in remodeling retailers and grocery chains. Kohlmeyer stays busy because suburban Long Island is rapidly running out of room for new construction.

“It’s based on availability of space and these retailers want locations,” said Kohlmeyer, whose company recently helped convert a closed Kmart into a Wal-Mart. CRK prefers renovations since the job site is ready and more controlled.

“You’re not waiting for the bricklayer, the roofer, the ironworker,” he said. “They award the contract, you can go to work.”

Many of his projects are “open-store” renovations. CRK is putting in a new tool center—and other upgrades—for a Home Depot and they work often at supermarkets. It’s a different type of construction, and Kohlmeyer selects his crew carefully. They’re in public eye and should blend in with the shoppers in the next aisle. And commitments must be kept.

“When you say, ‘OK. Friday we’re going to turn the bakery over,’ you’d better mean it, because they don’t want to miss a beat,” Kohlmeyer said. “They don’t want to not sell one of their products. If you change every frozen food case in the store, it’s a Herculean effort on everybody’s behalf. The next day it’s up and running, they’re selling ice cream and nobody ever knew you were there. That’s what we got good at. We’ve got a very good reputation for doing that up here.”

Most of this is design-build, with little more than a written scope of work.

“If you’re not used to it you’re going to underbid and overbid and there are no mechanical drawings on these remodels. It’s the way the job’s developed,” Kohlmeyer said. “They do it for economic purposes because for an engineer to go in and do a remodel, it doesn’t work. So they depend on the electrical contractor. They take it apart to save what they got to save and put it back together and make it work.”

When estimating and bidding remodels, Kohlmeyer said understanding the retailer’s schedule and CRK’s manpower requirements is important. And since much material gets reused—such as raceways and feeders—he goes with gut instinct.

But there was an expensive learning curve as CRK started out underbidding these projects.

“A lot of contractors will step into this arena, do one job and step back out, because they realize, wow, it’s not what we thought it was. You take a lot risks,” said Kohlmeyer. “You assume a lot of things are going to be behind those walls and above those ceilings.”

CRK has an advantage because they helped build some of the stores they are renovating.

One of today’s biggest challenges is scheduling. The fiercely competitive retailer wants the project done quickly, and schedules have gotten much shorter.

“They do close off areas, but they give you very little time. You need the right crew. You need trained and qualified people,” said Kohlmeyer. “It’s definitely more challenging. You don’t have a clear set of drawings and there’s a lot of value engineering and a lot of design-build.”

Ed Proefke Jr., a vice president of Logan and Clark, a Clearwater, Fla., general contractor, counts heavily on his electrical contractor for his renovation work, most of which centers on healthcare facilities. His 15-employee firm, which incorporated in 1967, has found a niche. Since central Florida doesn’t have a lot of industry, Proefke emphasizes rehabbing radiology suites, patient rooms, medical offices and related work. Since hospitals are 24/7, his firm is used to working environments.

They use negative air systems for dust control and most of the work is done during normal hours, but electrical shutdowns need special coordination. Areas are partitioned if the job will last a while and sensitive areas, such as surgery suites, require unique preparations.

“You have to dress up in scrubs and maintain the sterile environment. A lot of that is done after hours,” Proefke said.

The EC often has to run back to panels in far-off electrical rooms, usually the hardest part of the job, and mystery often lurks behind the walls.

“A lot of times they don’t have good documents, so there’s a lot of unknowns you deal with. And if you’re trying to salvage different systems or whatever, things come up that you have to deal with that you don’t always foresee,” Proefke said. “Trying to conceptualize that early on, when you’re phrasing things, it’s beneficial to be able to anticipate some of that stuff.

“Typically what ends up happening on the electrical side, they’ll just change the equipment out. If there’s switchgear that’s not available any more, they’ll just change it,” he added. “We’re working on a job now where the gears and breakers are just falling apart and they’re just going to put new panels in. You switch gears. Sometimes it’s easier to do that than to search for replacements. And the newer stuff works better and it’s safer. On the electrical side it’s often an easy call. Just go with the new stuff.”

Most of the work, under strict state regulation, isn’t eligible for design-build. The hospital recommends better-qualified contractors and Logan and Clark tries to stick with one firm.

“They understand that work. They’ve been working in the hospitals probably longer than we have. They know the drill pretty well,” Proefke said. “My philosophy is that I don’t invite somebody to bid who I don’t think can do it. Especially electrical systems in hospitals; they’re pretty critical.”

The electrical crews are small—two to four journeymen—and they must be clean cut and well mannered.

“We have to be invisible. They’ll get on you hard if anybody makes any comments to anybody that are off-color,” Proefke said. “We have to be careful. But the guys are pretty good. You tell them what’s the deal and if they screw up you send them on their way. Sorry.”

Since 75 percent of their work is upgrades, Logan and Clark seems to have found a good home in healthcare. Most of the buildings they renovate are 20 to 25 years old and there’s a steady market for their services.

“We’ve found that it’s more complicated work to do and a lot of people don’t want to mess with it and the competition is pretty limited,” Proefke said. “We still get a fair amount of competition but we don’t have huge bid lists and we feel we can do better. But we’ve found we have come to understand what we’re doing.” EC

FULMER, a Baltimore, Md.-based freelance writer, can be reached at [email protected].

John Fulmer is a freelance writer based in Joppa, Md., and former editor of ELECTRICAL CONTRACTOR magazine. He can be reached at [email protected].