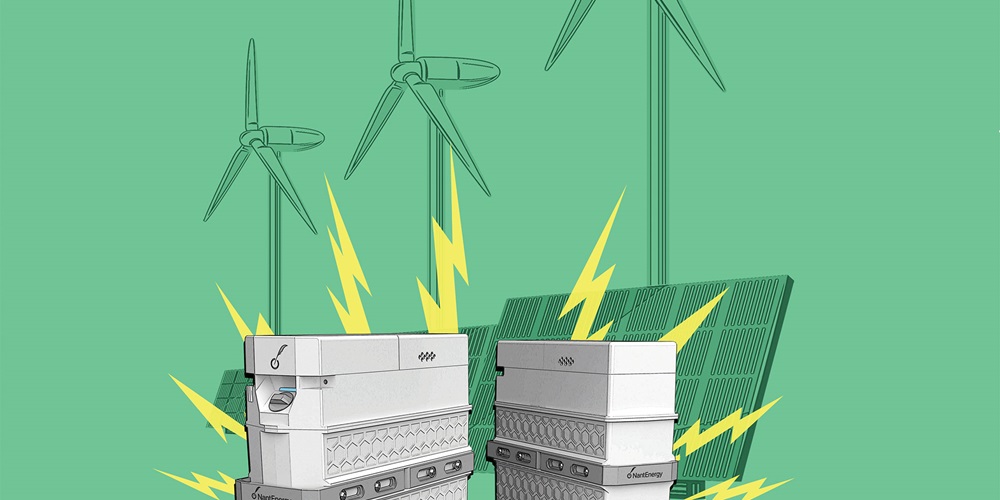 From incremental improvements to something entirely new, today’s battery research and development is breaking ground in how we’ll store and deliver power.

Today, one rechargeable battery type towers over the rest. The U.S. Energy Information Administration reported that more than 80 percent of U.S. large-scale battery storage power was provided by lithium-ion (Li-ion) batteries in 2018. BloombergNEF shared worldwide manufacturing capacity for these batteries, and it has nearly tripled in five years. It now stands at 302.2 gigawatt-hours (GWh). In another five years, more plants will open, adding 603.8 GWh.

Rising production has also reduced Li-ion battery pack prices to less than $176 per kilowatt-hour (kWh). In 2010, that price stood at $1,200. By 2024, prices could drop below $100 kWh, a price point more appealing to utilities. Tesla Inc. is one of a handful of companies currently offering Li-ion storage batteries for grid applications.

“Lithium-ion batteries are benefitting from a massive economy of scale that no other technology has obtained right now,” said Jason Burwen, vice president of policy, Energy Storage Association, Washington, D.C. “Energy storage has moved from peripheral to serious consideration. In 2018, we saw 1 GW of batteries installed in the U.S. Forecasts estimate growth up to 10 times that by the early- to mid-2020s. By 2024, we expect the U.S. energy-storage market to reach 14 GWh.”

Burwen added that battery energy storage is “penciling in” for utilities and may play a large role in replacing retiring capacity.

“We’ve seen utilities in Nevada, California, Hawaii and others announcing procurements of battery storage in the 100 megawatt-hour (MWh) range for a 4-hour power duration,” Burwen said. “This isn’t being driven by policymakers but companies who see storage making the most economic sense.”

Daniel Abraham, senior scientist for Argonne National Laboratory in Lemont, Ill., said there are several reasons why Li-ion is a favored battery today and will be for the next few decades. It holds an advantage in terms of energy density and can be made lighter and smaller. Further, Li-ion offers reliability, lower cost and longer life, which are all milestones that keep improving.

“With grid and energy storage, you may need high power,” Abraham said. “Lithium does a great job. It can respond rapidly. Its lifetime cost might also be lower relative to other technologies. I see lots of interest in further lithium-ion research. There is work that still needs to be done, notably in further improving energy density beyond the marked progress over the last few decades.”

Saft Inc. is a worldwide battery manufacturer based in France with U.S. offices. The firm is working on several projects to further Li-ion batteries.

“We are working on improvements in the cell chemistry of lithium-ion and packaging, including energy-storage containers with higher energy density, say a 20-foot container,” said Jim McDowall, senior technical adviser for Saft America Inc.

“When used in a data center, a typically mixed-use occupied building, our lithium-ion batteries feature a phosphate chemistry. This is a safer chemistry less likely to have an energetic reaction caused by an internal cell short or other issue.”

Saft has also added a nickel-oxide-based chemistry that helps for longer discharge applications and increased capacity for safe and high-energy applications in larger storage containers. High energy is a goal in these applications because stored power might run 3–4 hours.

“Under this scenario, perhaps the storage unit is being used to deploy stored renewable power (such as solar) smoothly into the grid during peak periods,” McDowall said. “There is also short-duration storage to provide high power for relatively short run times to stabilize the grid. Hawaii used this method in its early deployment of solar.”

In Europe, Saft has joined a consortium to develop solid-state lithium batteries.

“Solid-state should improve safety and enable us to use metallic lithium,” McDowall said. “This should greatly improve battery energy density. Currently, we take copper coils and apply graphite onto them. Lithium-ions get inserted into the graphite. In a solid-state configuration, metallic lithium is both the conductor and active material and is very safe.”

“In telecom applications, we have worked to improve energy density with our nickel batteries and made the electrolyte product maintenance-free. In some markets, improved cycle life and better battery configurations (packaging) was the goal. Industrial standby is a good example. It’s a big market for us that includes telecom and utility substations,” he said.

While Li-ion is expected to be the battery of choice for the coming decades, other technologies are coming. Storing renewable power in bulk, for instance, could require different or hybrid battery technologies.

Historically, zinc batteries have been popularly applied to hearing aids because of low cost and light weight. They are also safe and reliable, but the challenge is rechargeability. Nant has solved this obstacle through a combination of battery chemistry and mechanical design. Nant has resolved three main challenges to making zinc batteries rechargeable. Those include suppressing dendrite formation from the electrode’s surface that can pierce and short-circuit the cell, extending the performance or lifetime of the air electrode and scaling up the zinc-air battery using controls and electronics (intelligent power management) to add more power.

Ramkumar Krishnan, Nant Energy’s president/CTO, explained that, with metal-air technologies, the state of charge is not based on voltage. The use of intelligent electronics addresses variations in impedances, capacities and so forth that help Nant scale to a large string of batteries needed for storage.

“Typical rechargeable batteries consist of an anode and cathode at opposite sides of the cell with a conductive electrolyte in between,” Krishnan said. “A zinc-air battery uses air as the cathode opposite a zinc anode. During the battery’s charging phase, electrical current converts zinc oxide into zinc and oxygen. When energy is required, the discharge phase oxidizes the zinc with air, and the process can repeat. This relatively simplistic design offers the potential for lower-cost manufacturing compared to other battery chemistries offering less supply-chain risk and environmental impact.”

Krishnan cited zinc raw material costs as averaging 5% the cost of lithium-ion. The firm asserts if Li-ion were to drop to $30+/kWh, zinc would come in at $2/kWh.

“Using zinc allows us to avoid expensive and potentially volatile compounds found in other batteries including lithium, cobalt and vanadium. Making a working zinc-air and hybrid zinc-air lithium-ion battery suitable for peak-power demands was the result of multiple configuration refinements,” Krishnan said. “Optimizing power is important based on customer loads. Our zinc-air, for instance, is well-suited for flat loads favored by microgrid applications or telecom. We have an eye on tailoring our batteries for mobility and EVs but are early in our investigation.”

Flow batteries and other ideas

Flow batteries are designed to pump liquid electrolytes through the battery’s cells when electricity is needed. The electrolytes are easy to replace, making flow batteries potentially more convenient than the lead-acid, lithium-ion or solid-state batteries. According to MarketWatch financial information website, the growth in renewable energy (solar, wind and tidal) may favor flow battery applications.

“For storage, intriguing versions of flow batteries are being investigated by us and others,” Abraham said. “Flow batteries are an idea that was explored in the mid-’80s. Research has been revisited as we and others try to figure out how to extend battery longevity. One idea is organic media that might also offer a higher energy capacity. If you can bring the cost down and make the system work over a 30-year period, flow batteries could be a very attractive energy-storage approach.”

Argonne is also exploring other electrochemistries, as well as electrical mechanical energy storage such as flywheel or compressed air storage. Other national lab work is bearing fruit, too. A new liquid metal technology was spun out of Massachusetts Institute of Technology work for Ambri Inc., Marlborough, Mass. In this approach, two liquid electrodes are separated by a molten salt electrolyte.

Operating at an elevated temperature maintained by self-heating during charging and discharging, “the result is a low-cost and long-lifespan storage system,” according to Ambri’s website.

He said that as people pursue longer battery duration, new ideas being discussed include seasonal storage, a concept of creating continuous battery usage over several weeks to months or perhaps only once or twice a year.

According to Krishnan, batteries currently represent 10 GW in pass-through power.

“As this increases, cost and sustainability demands will also increase,” he said. “What we are doing is one solution. There are other promising ideas out there too to build out a longer life [and a] clean battery future.”