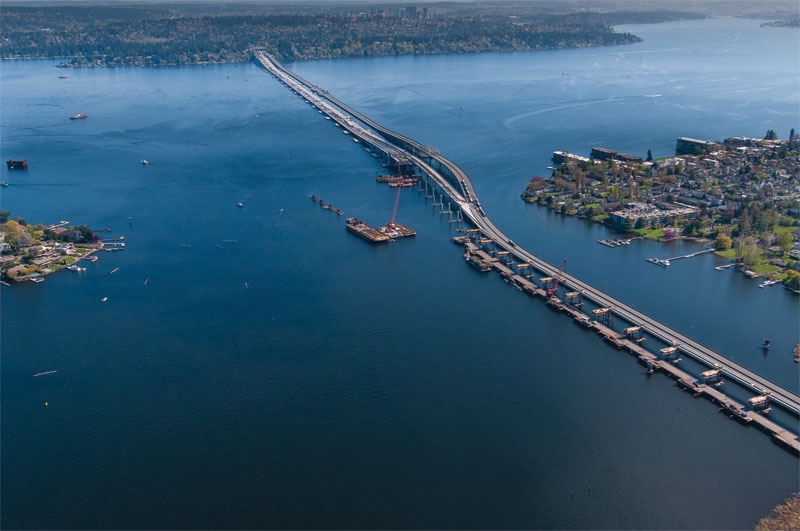 The world’s longest and widest floating bridge spans a portion of Highway 520 in Washington state, one of the busiest corridors in the Puget Sound region. The bridge stretches 1.4 miles across Lake Washington and measures 116 feet wide at its midpoint. It is part of the highway’s connection between Seattle and the suburb of Redmond, and, over the past five years, through multiple phases, this iconic bridge has been replaced with a new and updated electrical system installed by DBE Electric Inc., Auburn, Wash.

Originally known as the Evergreen Point Floating Bridge, SR-520 was built in 1963. By 2011, it was showing wear. The original bridge was vulnerable to windstorms, and its support columns were not earthquake-proof.

The population of the area had outgrown the bridge, as well. With only two lanes in either direction and no shoulders or high-occupancy vehicle (HOV) lanes, the bridge could no longer accommodate the growing traffic.

As a result, the Washington State Department of Transportation (WSDOT) undertook a $4.56 billion, multiphase mega-project aimed at replacing the bridge without disrupting traffic. Kiewit/General/Manson (KGM), Bellevue, Wash., served as general contractor for the design/build project and undertook electrical installation through the pontoons, while DBE Electric installed all electrical power and equipment from pontoons up through the bridge. DBE Electric’s installation includes vehicle and pedestrian lighting, signaling, tolling infrastructure and intelligent transportation systems (ITS).

DBE Electric launched in 2009 and was certified as a DBE/MBE (Disadvantaged Business Enterprise/Minority Business Enterprise) company in 2010 with founder and president Mary Lerdahl at the helm. Lerdahl started the business as a licensed electrical administrator in the state of Washington. The company specializes in highway and road electrical projects, including traffic signals and illumination systems, ITS and tolling infrastructure.

The bridge project served as the company’s largest design/build project.

Bridges require considerable power and especially so in the case of the SR-520 bridge. It includes roadway, pedestrian and decorative lighting and a camera-based toll-collection system. The bridge also needed state-of-the-art sensors, emergency signaling and digital signage. DBE provided both electrical service and hardware installations.

To enable the sensor and lighting systems, DBE Electric installed all the electrical systems from the pontoons on up. That included electrical conduit across the bridge and a fiber optic system with an ITS that would enable engineers at WSDOT’s Transit Management Center to see the cameras and what’s happening on the bridge.

The bridge project required about two years in design and three years to build. All the subs as well as the general contractor, engineers, designers and owner participated in the design phase.

“I did work with the designers in terms of feedback—what works, choosing the supplier to build the gantry, the signs,” Lerdahl said. “It was collaborative in that way. When you work all that out before you actually put plans together, you have more success with the project.”

In late 2011, construction of the 77 concrete pontoons began in Aberdeen and Tacoma, Wash. These hollow structures provide the bridge with buoyancy. The pontoon-building site required power to operate the cranes that hoisted the massive concrete structures (some of which are as long as football fields) and lighting for the work area. DBE Electric provided that electrical service.

At the time that project was being completed, DBE Electric won the contract to provide electrical construction for the bridge itself.

As the new bridge was being built, motorists were travelling the old bridge, and WSDOT required a temporary tolling system there. DBE Electric provided that system, then decommissioned it and transitioned it to the new bridge as traffic shifted to the new structure. The company installed two tolling gantries and signs for the temporary system and two for the ­permanent system.

DBE Electric installed the conduits that protect electrical wires through those pontoons as well as under the roadway.

Electrical contractor Amaya Electric, Lakewood, Wash., ran power under the deck, with brackets and hardware that support electrical conduits between the top of the pontoons and below the roadway.

Amaya Electric also installed the medium-voltage system that carries electricity to the entire bridge, including lighting, signaling and sensors.

The new bridge has an extensive lighting system. DBE Electric provided pedestrian and bicycle pathway on the regional shared-use path (RSUP), roadway and bollard pathway. The company also installed cabinets for lighting, ATM signs, a data station, loops, CCTV, fiber and electrical equipment and cabinets to operate all the systems.

DBE Electric also installed emergency signals that are run out of controller cabinets at each location, then tied to the fiber system. WSDOT operates the entire bridge’s electrical systems remotely from its traffic management center. For pedestrian lighting, DBE installed 311 lighting fixtures for the RSUP and five decorative lighting fixtures. Another 246 fixtures were installed for illuminating the roadway for traffic.

“There are illuminated sentinels with art deco features, which give the bridge a unique look,” Lerdahl said.

The bridge also has a ramp, traffic light and metering system to manage traffic flow onto the bridge. Signage includes traditional speed limit signs, electronic lane and speed control signs. For signage, DBE Electric installed the gantries that the signs are mounted on, with power running through them.

DBE Electric built the electronic tolling gantries for permanent and temporary tolling systems. This tolling system features cameras and sensors to photograph each license plate as a car passes. The car’s owner then receives a bill, eliminating the need for toll collectors or stopping or slowing by vehicles to pay tolls. System cabling includes fiber backbone to the automated system that interfaces with sensors and cameras.

The bridge’s electronic signs display the toll amount, Amber Alerts and any other public announcements.

Worker safety was a matter of education and DBE Electric and KGM held frequent safety meetings.

“Each project has its own unique challenges and safety issues,” Lerdahl said. “We were able to layer in our own safety programs with [KGM’s].”

The electricians took part in daily and weekly safety and toolbox meetings. Safety managers drove up and down the bridge every day during the project. One fatality from KGM’s crew did occur during the project, providing a tragic reminder that accidents only take one second to occur.

At peak, leading up to the bridge opening in April 2016, there were about 25 DBE electricians onsite. DBE Electric crews altogether installed more than 300 miles of electrical wire and various electronic components and sensors along the bridge’s entire length—all electronically linked to a new maintenance facility in Medina, Wash., and WSDOT’s northwest regional office in Shoreline, Wash. The project included 62,500 feet of conduit and 24,000 feet of fiber.

DBE Electric benefitted from its small, woman-owned USDOT certification to earn the project. According to a WSDOT study in 2014, only 1.8 percent of construction companies in the area are owned by women.

Lerdahl said her company’s qualification as a Disadvantaged Business Enterprise may have made the difference in accessing a project such as this. She never would have had an opportunity to participate in a project like this and, as a result, would have missed out on accelerating her own professional growth and that of her company.

“[This never would have happened] were it not for the programs in place by the Federal Highway Administration that require participation from disadvantaged business enterprises,” she said.

For DBE Electric, the project served as a vehicle to other large design/build projects.

“Design/build is getting to be one of the preferred models of delivering projects, so it’s been a great opportunity for me to learn more myself,” Lerdahl said. “One way to build a business is to take on this kind of work.”

However, getting the job is only the first step, she said. It’s the work of her expert team and the company itself that takes a project to successful completion.

“If you give a person a chance, they can step up,” she said. “I got a great hands-on education in construction management just working side by side with the [KGM] team.”

As the new bridge opened to drivers, its 50-year-old predecessor was fully decommissioned. The new, six-lane bridge is 130 feet longer than the one it replaced. It is designed to be resistant to windstorms up to 89 miles per hour; has one HOV lane in each direction and wider, safer shoulders for emergency parking. It features a 14-foot-wide bicycle and pedestrian path on its north side. It is built to eventually accommodate light rail.

The old bridge is being floated away on pontoons to an industrial site for a combination of disposal and recycling. The pontoons were sold to a recycling company that plans to reuse the individual pontoons for other projects.

An independent contest in 2012 sought ideas for the 33 pontoons of the old bridge, with solutions ranging from an elevated park like New York’s High Line to partial submersion for walking paths. The first pontoon of the old bridge to be disassembled was towed through the Lake Washington Ship Canal in July.