By Popular Demand: The industry is recruiting and training to meet the need for lineworkers 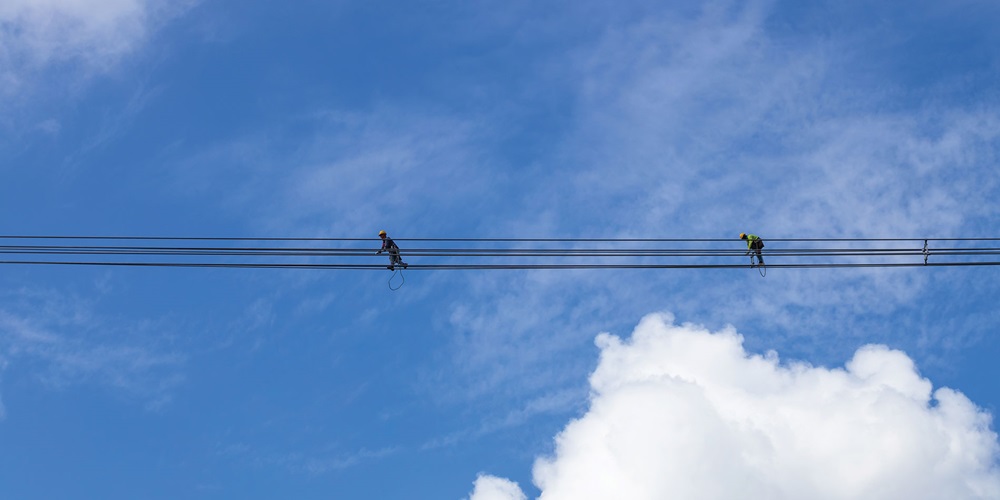 Your Business Education and Training Outside Line Workforce Development

While contractors are seeing an unprecedented rise in line work this year, training programs are ramping up to attract and train high-quality recruits to support the growing number of projects. Contractors, utilities and line work schools have a balancing act when it comes to ensuring they can employ the lineworkers needed for projects now and in the future.

The business—whether for utilities or contractors—is a fluid one. Just as demand is up in many parts of the country, so is supply. Apprenticeship programs are seeing a record number of quality candidates.

How long will the demand continue, and how can training programs stay versatile enough to produce apprentices when they’re needed? Robbie Foxen, executive director for the Missouri Valley Line Constructors Apprenticeship and Training Program (Missouri Valley JATC), anticipates there being plenty of work for the next 5–10 years.

Infrastructure projects and pandemic-related labor shortages are driving the demand for lineworkers. The passage of the Infrastructure Investment and Jobs Act in November 2021 means nationwide projects are ahead. Other growing opportunities involve installing electric vehicle charging stations, constructing the facilities to build EVs and an impetus to upgrade the grid overall.

The Missouri Valley JATC is able to secure and train enough lineworkers to supply contractors now. Will it be enough in four or five years? Foxen is not so sure.

People have been paying attention, though. The number of candidates applying has been growing.

“When we open an application, we’ll get 100 applicants in one day,” Foxen said.

Interest doesn’t mean a person is right for the job. Usually, a large number of applicants filters down to a much smaller pool of apprentices who’ve completed training. Hurdles include an aptitude test for education, such as basic algebra and reading comprehension, which weeds out about 15%.

Those who make it through the interview, and are among the highest rankers, still have to complete a one-week bootcamp. Some may not show up. Those who make it to bootcamp on day one are climbing poles and pulling ropes or cable, along with other physical activities. They receive CPR, first aid and safety training. Within that relatively short period of time, the recruits qualify to be assigned to an employer for six months.

In some ways, recruits haven’t changed demographically. A typical recruit is male, between 22 and 26, with many coming out of other careers. Not everyone is young; some applicants join training programs in their mid-40s, and these individuals are often highly successful, Foxen said.

“They tend to have a lot of drive when they come in older,” he said, adding that, for one thing, many have to support a family, and “sometimes it helps to have some experience in the so-called real world.”

One major recruiting effort involves getting to students early, before they make other career plans. The Missouri Valley JATC started an internship program for local high school students, running nine hours a week, Tuesday through Thursday.

“It’s a way to come in and see what life is like as an apprentice lineman,” Foxen said. “We’re seeing a ton of people apply for that program.”

The industry faces some headwinds, however, in the face of job counseling and college advisers overlooking the trades. This has been a problem for decades, as high schools have been emphasizing four-year university degrees, Foxen said. Unless the power goes out, many young people don’t know what a lineworker does.

So, JATC programs try to promote some of the trade’s benefits with students. For example, many accepted into the training program enjoy an average starting base wage of $29 per hour, with subsequent pay increases every six months or 1,000 hours. A journeyman’s typical hourly wage is $50. And the career can be a long one; those who stay in the business for five or 10 years often rise to crew leader, and, at that point (just as they are aging), most are not climbing poles as much.

The work, and consequently the training programs, are changing to keep up with new technology and safety demands. For example, lineworkers are leveraging more electronically controlled equipment with switches on the power lines and poles that can be tapped into with apps and computer systems.

“As new stuff comes out, we’re working with power companies to get that equipment into the apprenticeship program,” Foxen said. “We’re trying to be proactive as opposed to reactive, trying to teach them the newest safety methods and equipment while they are here.”

Depending on the region and the different utilities and contractors hiring, many lineworkers opt for employment with contractors. However, that may depend on the wages the utilities are offering.

Part of the attraction for utility work goes beyond pay. Some lineworkers just don’t want the long hours and travel.

“When you work for a contractor, your work area could be the entire United States,” based on weather disasters, Foxen said.

When it comes to storm damage, “a lineman is in demand everywhere,” said Kevin Castle, director of the American Line Builders JATC (ALBAT), Medway, Ohio.

For those willing to travel, healthcare and retirement programs, as well as hours and overtime, can make contractor work more desirable than the utilities.

As in other parts of the country, ALBAT’s program has been hiring and training lineworkers ahead of demand. It is also preparing a record number of recruits for line work, Castle said. In addition to growing numbers of infrastructure projects, there is a labor shortage caused by older journeymen retiring. The center accommodates about 100 additional trainees each year and provides 1,600 a year now in the program. That’s up from the 1990s, with about 250 apprentices.

That trend continues its upward trajectory, and “no one knows when it’s going to stop,” Castle said.

COVID-19 and supply-chain shortages have introduced other challenges for the training pro. For instance, Castle noted that material orders are slow or delayed, which complicates training schedules. Even parts used to fix bucket trucks are often on back-order—sometimes three months out.

When material finally comes in, “it’s hurry up and get to work,” he said.

Finding instructors has also been a challenge.

“Work is so good in the field that getting qualified journeymen who can come in to teach,” has been difficult, Castle said.

Ultimately, the point is to be sure that contractors can hire the qualified staff they need when projects arise.

“Contractors want to grow to match and serve the utilities or whoever their customers are, and they need the bodies to do that,” he said.

Candidates pursuing specialties, rather than being linework generalists, represent another recent trend. Today, workers can offer their services in cable splicing on the ground, substation work, traffic signaling or tree trimming. That means those who aren’t able to climb a pole, for example, may still have skills to offer.

To identify strengths and get a head start on training, some candidates attend additional training programs or internships. Many who come to the Northwest Line JATC (NWLJATC) in Vancouver, Wash., have already been to the Vocational Outside Line Training Academy (VOLTA).

As a pre-apprenticeship program, VOLTA provides entry-level training, including fundamental knowledge of electrical systems, pole climbing, work with riggings and more. The trend underway is for trainees to attend line schools before applying to an apprenticeship program, thereby increasing their skills and competitiveness, said Terry Lowen, NWLJATC director.

“It seems like 90% of the people who come in have been to line school,” he said, adding that this is on top of many who already have experience serving on line crews.

At the Northwest Lineman Apprenticeship program, “Business is booming right now” Lowen said. The NWLJATC had a historic year in 2021, with a thousand recruits—more than it has ever received.

Part of the trade’s recent popularity is the result of ongoing recruiting efforts at career fairs and high school programs. Recruiting women and minorities has continued to be a challenge, however.

“Everybody is invited to participate,” Lowen said, adding that outreach continues to diverse groups. “We have a [woman] who’s on the line program who is awesome,” but she represents a tiny minority of the applicants who come into the program, he said.

“We’ve got a father and son in the program. We don’t discriminate on age” either, he said, adding that the trade includes people from other careers such as railroad work, the military, or other parts of the construction industry. “There’s a lot of successful people who are having a second career.”

Those who come in with the right attitude seem to be the most successful.

“If you have a good attitude and work well with others, that’s where it starts,” Lowen said, adding that, “If [they] communicate well,” apprentices will get solid training from the more experienced lineworkers around them.

In the meantime, training programs keep one eye on future demand as they train workers for the present. You have to follow a fine balance to provide the workers needed without over-training for jobs that may not be there in another year or two.

“This industry just goes up and down constantly, so you don’t want to flood the market. Right now, we’re meeting the demand,” he said.

Looking longer term, Lowen added, “Hopefully, the idea is these apprentices will stay and be lineman in the area, and the market will correct itself over time.”