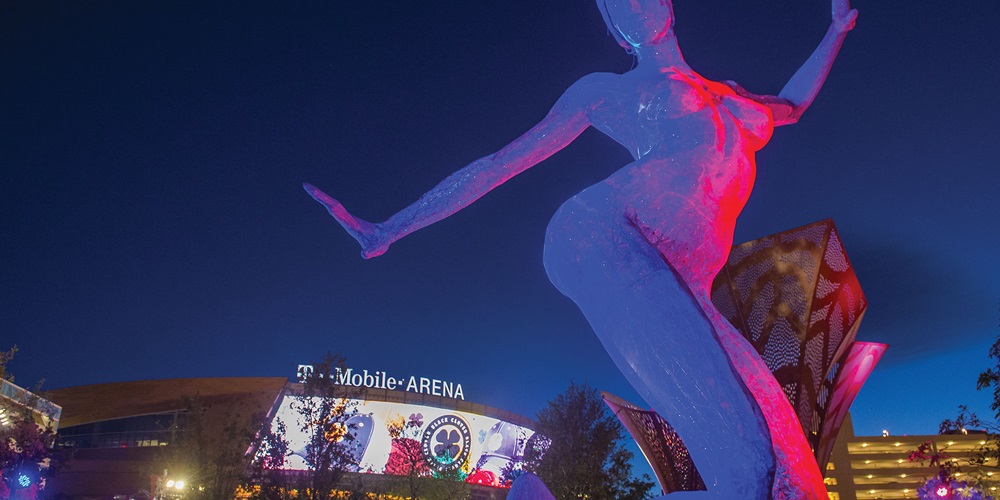 Mojave Electric in Las Vegas was selected as the electrical contractor on one of the most impressive and successful recent projects to be built in its home town.

T-Mobile Arena is home to the Vegas Golden Knights, the NHL expansion team that reached the Stanley Cup finals in its inaugural 2017—18 season. The arena hosts between 100 and 150 events annually, including NHL hockey games, NBA basketball games, boxing matches, concerts and nationally televised entertainment award shows and competitions, such as the Academy of Country Music Awards, the Billboard Music Awards and the Miss USA beauty pageant.

The owners are Anschutz Entertainment Group and MGM Resorts International, the latter of which handles daily operations.

The arena is constructed primarily of structural steel and composite concrete floors. In fact, 7,000 pieces of steel, weighing over 7,100 tons, were installed. A number of 350-foot-long trusses support a 200,000-lb. capacity rigged grid, which is used to hang equipment for concerts and events.

Several challenges came up along the way. One occurred early on, when it was discovered that, at two ends of the site, underground power and fiber optic cables from nearby resorts, casinos and other businesses were in place, which complicated pier installation. However, this issue was eventually resolved.

The project was built with a commitment to green standards and achieved LEED Gold certification.

Even more impressive than the green aspect was the safety performance. All of the workers (contractors and subcontractors) clocked more than 2 million work hours with zero lost-time injuries and an OSHA recordable incident rate of just 2.5.

The safety performance was due in part to the fact that the project was designated a drug-free zone. All employees were drug-tested and trained during an extensive safety orientation, which was led by the Hunt/PENTA safety manager before work on the project started.

In addition, all workers began each workday with a safety huddle, during which plans were discussed for the day’s activities. Workers also engaged in stretch and flex activities each day before their shifts.

For the T-Mobile Arena, Mojave Electric dedicated 135 electricians and 35 low-voltage technicians over the two years.

One challenge Mojave encountered was a flood that resulted from some broken pipes. The flood caused water to leak into the medium-range switchgear, requiring it to be replaced. Working together, Mojave Electric and ATI Electrical Supply arranged for a quick replacement.

Why was Mojave Electric chosen for the project? According to Dave Warnock, the company’s safety supervisor, it was because it had the most innovative and streamlined ideas for how it would work on the project.

“Our president and other top executives met with the owners and general contractors,” Warnock said. “Our company had put together a plan on how we were going to go about working on the project [and] the process that we would use.”

The outline featured a number of means and methods that had worked in the past and combined them in a way that obviously met the needs of the owners and general contractors.

For example, one strategy was to use a lot of prefabrication, which would help processes flow smoothly and quickly on the project.

“A key to success was creating a good plan from the start [and] sticking with that plan throughout the project,” Warnock said.

Mojave Electric is very familiar with building information modeling (BIM), which everyone involved in the project used.

“The fact that everyone was utilizing BIM was another important key to the success of the project,” he said. “BIM got everyone on the same page. It can’t eliminate 100 percent of problems, but it does make things move along easier for everyone. It also highlights potential problems in advance, so that everyone can sit down and iron them out before they become real problems.”

Another important key to success was constant communication.

Warnock admits there were a few times when communications didn’t go the way they should have, and that added some new challenges, but things eventually got worked out. Another challenge was that, on occasion, originally planned requirements needed to be modified or new requirements needed to be added, such as requests from the owners that were out of the original scope of the project.

“These were requests that ended up being made after the fact, because they weren’t realized during the original planning,” he said.

However, with sufficient communication, these revised and new requirements were successfully integrated into the project.

Fortunately, given the project took place between 2014 and 2016, Mojave Electric did not have many concerns with labor or procurement.

“It was nothing like the concerns we are having with these [issues] today,” he said.

Warnock attributes the impressive safety record on the project primarily to the buy-in and commitment of all of the contractors and subs, as well as the expectations established by the owners and the general contractors.

“We were fortunate, because all of the contractors and subcontractors paid a lot of attention to detail when it came to work in general and safety in specific,” he said.

For example, one issue that received a lot of attention was concern over “trade stacking,” where more than one subcontractor ends up being scheduled to work in the same area at the same time.

“The contractors worked hard to minimize this with careful scheduling and keeping that scheduling updated, so that the trades weren’t scheduled to work in the same place at the same time,” he said.

While there were a few minor injuries during the two years, Warnock believes the daily stretch and flex program helped to prevent even more.

“The general contractors also held monthly safety meetings, where they went over all of the good things that were happening with safety, as well as bringing up areas that needed to be addressed,” Warnock said. “There was also a lot of focus on things that could be improved to ensure that everyone could work even more safely. We also had a lot of good field employee feedback on safety things they saw that they felt could be improved.”