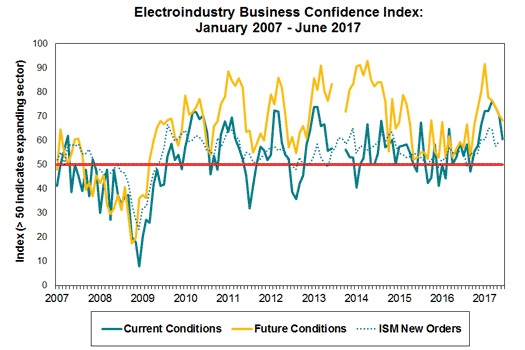 According to the June Electroindustry Business Confidence Index (EBCI) current electroindustry conditions, a monthly report by the National Electrical Manufacturers Association (NEMA), saw the current conditions index hit its lowest point since November 2016. NEMA attributes this drop-off to a “perceived lack of policy progress” on the part of the senior managers surveyed for the report.

The June current conditions index sits at 60.5, a 10.1-point drop from the 70.6 number seen in May. However, this still puts the index value in what NEMA calls the “expansionary” range, indicating generally positive and expansion-friendly conditions in the electroindustry sector. Any value above 50 is considered expansionary.

The results come from a survey of senior managers at NEMA member companies, who are asked first about how economic conditions have changed in the previous month, and then about their expectations for how North American economic conditions will change in the next six months.

Panelists are also asked to report their impressions of intensity of economic change using a scale of –5 to +5, with 0 meaning “unchanged.” In June, the mean and median intensity both hit their lowest points in 2017 so far, with the mean falling to 0.3 and the median falling to 0. These values had previously not gone below 0.6 and 1.0, respectively, this year.

All EBCI reports since 2014 are available at www.nema.org/Intelligence/Pages/Electroindustry-Business-Conditions-Index.aspx.