Many Heads Are Better Than One: Battaglia Electric delivers results for a Delaware hospital 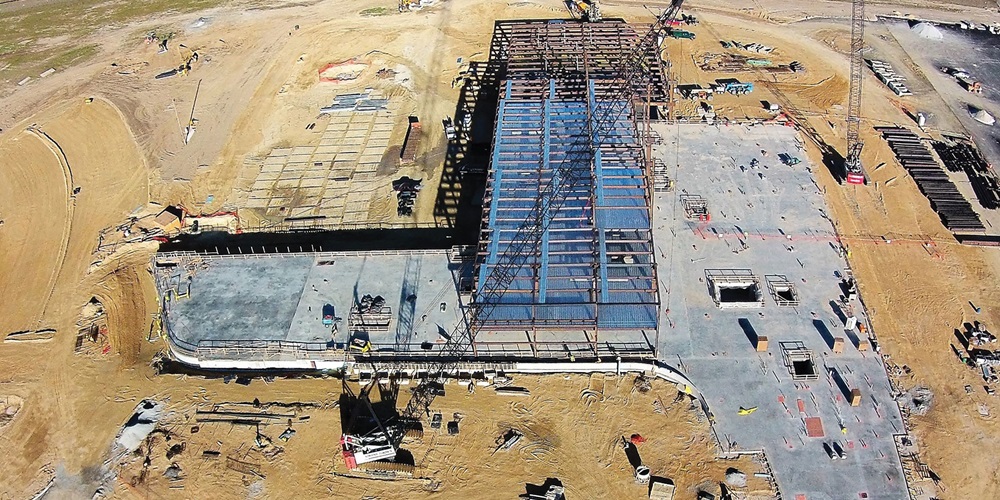 Bayhealth Hospital’s Sussex Campus opened its doors to patients in 2019 as the first newly constructed Delaware hospital in decades. The building rose over the course of several years in what had been a farm field. The $330 million Milford healthcare center was also the state’s first integrated project delivery (IPD) construction, meaning it was planned, designed and built as a collaboration between a building team of the owner, architect, engineers and general and subcontractors.

Development for the seven-story facility began in 2015 while construction took place over 24 months. Battaglia Electric Inc. delivered the electrical and low-voltage installation in collaboration with general contractor Whiting-Turner and engineering and architecture firm Cannon Design.

“This was the first brand-new, out-of-the-ground hospital in the state of Delaware in more than 50 years,” he said.

The project was designed with collaboration in mind. IPD jobs bring the entire building team to the table, rather than putting the GC front and center. And instead of focusing on individual parts of a project, the participants planned around the whole process, which reduced waste in design and required fewer change orders.

The Bayhealth contract was a tri-party agreement between architect and engineering, construction manager and owner, and 11 trade partners, including Battaglia.

“We all signed the same contract,” Zalewski said.

The company wasn’t just providing the electrical scope, he said; they would participate as a member in the entire project.

As a result, “Our efforts as an active and participating trade partner helped keep the project under budget and on-time,” he said.

IPD was a very new experience for most of the participants, said Robert Garra, Cannon Design’s engineering director.

Throughout the design phase, the entire construction team met in one large room and several separate conference rooms for three days a week, every other week. Seven project implementation teams (PITs) met to identify key individual issues that needed addressing, and, at the end of the day, PITs delivered a report, including any challenges they were facing, to the entire team.

“By working closely before reaching the construction site, the design and build teams established relationships very early on,” Garra said. “In traditional projects, you don’t make those connections until after the construction is underway.”

Preconstruction planning led to a variety of cost and time-saving solutions as well as some that improved the safety of the workers on-site. For example, when Battaglia Electric constructed a new substation 3,000 feet from hospital, the IPD process brought multiple parties into the conversation about conduit trench work. Traditionally, such a project might have required that Battaglia Electric hire an excavator to dig the conduit trenches, but, in this case, the team generated some new ideas.

“The site contractor said, ‘We have all our equipment here so we could just dig it,’” Garra said, adding that this saved time and money.

“They got that duct bank in very quickly,” he said.

In fact, the hospital’s overall schedule was condensed, but teamwork helped meet the deadline. It also saved costs, Garra said.

The team also planned the on-site temporary warehousing for materials as they were needed, and Battaglia Electric was able to enter into a 400,000-pound copper contract that saved costs because copper prices escalate over the life of the project. Throughout the job, the team operated with the mantra of doing what’s best for the project and not for individual entities, Garra said.

The project also featured a building information modeling (BIM) design. With the help of Trimble RTS, Battaglia Electric was able to efficiently plan, design, construct and manage the project’s prefabrication, off-site and on-site. With BIM, Zalewski said, Battaglia Electric mapped out the exact installation location for more than 10,000 points for conduit sleeves and concrete inserts, so workers didn’t have to measure by hand. They could build trapeze racks off-site and directly install them in the concrete inserts without drilling the concrete.

When finished, Battaglia Electric had installed more than a half mile of 33-kilovolt (kV) and 12-kV service-feeder cables from the outdoor substation, which is in addition to fiber optic and control cables through prefabricated duct banks and manholes.

“The use of IFS units allowed for ease of layout and installation of a total 199 panelboards,” Zalewski said.

The electrical contractor completed the interior and exterior installation and ran lighting for the helipad on the hospital roof and exterior architectural lighting.

The company installed all emergency and normal power distribution and branch cabling as well as the nurse call, fire alarm and distributed antenna systems for three cellular providers. The company ran cable to provide the 800-megahertz emergency responder radio system.

Low-voltage work also included the security, video surveillance and card access to manage who enters and leaves the hospital through any door, as accessing stairs and elevators. They provided the gas system distribution and monitoring, leak detection systems and powered the data center (with 14 IDFs) and the DAS equipment room.

There were a few other challenges on-site for the contractors to meet owner expectations. For one thing, Bayhealth and the state of Delaware strongly urged contractors to use at least 50% local Delaware workers, with 20% diversity in the workforce. They were advised to purchase the bulk of their materials within the state. Battaglia Electric exceeded these goals because the management team consisted of 100% Delaware residents, including a female project manager and shop steward and two minority foremen.

“Our field installation team was made up of over 80% Delaware residents, including six women and 18 minorities,” Zalewski said. “And nearly 100% of purchases were made through Delaware businesses.”

The building’s steel fabrication was completed with a topping out ceremony, which harkened back to an ancient Scandinavian builders’ rite held when the highest beam is fastened on top of the structure. Members of the community, patients, physicians, employees and donors signed the ceremonial beam that measured 13 feet. When Bayhealth was completed, the old hospital closed and patients moved to the new state-of-the-art facility within a matter of days.

“It was truly a great experience,” Garra said. “We had the opportunity to create something special for the community.”