The Low-Down on Equipment Problems 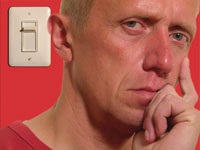 Device and equipment failures are a sticky and sometimes sore subject for contractors. A lot of blame gets passed around. However, some manufacturers are proactively seeking the root cause of the problem, and contractors can work with those companies to help determine the best way to handle such occurrences and stave off future problems.

The engineering department at lighting control manufacturer Lutron Electronics Inc., Coopersburg, Pa., autopsies every returned product to find out what went wrong. As a result, they’ve formed some good statistics on why products fail in the field, and in the overwhelming majority of cases, the culprit isn’t the product but how the product was installed. Their statistics offer some interesting insights about why callbacks occur and what contractors can do to reduce them.

According to Ed Blair, director, wallbox engineering, Lutron, the company examines returned products to determine the cause of failure.

“This feedback from the field sheds light on callbacks and complaints related to lighting controls and offers insights for contractors on how to reduce both,” Blair said. He also said the vast majority of returned products actually work just fine.

“The take-away for electrical contractors is that when there’s a problem, don’t start with the assumption that the product isn’t working. Before you go out for a service call, see if the problem is something that can be resolved over the phone.” Lutron offers a 24-hour helpline for all its products.

Blair said some simple exploratory questioning can produce a speedy remedy and include the following:

According to Lutron, one of the most common causes of problems is short failures. This occurs when a ground lead touches a hot lead inside the box, shorting out the electronics inside the device. Of course, contractors should never install a dimmer or other device under load. They should also take extra care to be sure hot leads are protected, especially when the device is being placed into the electrical box.

Another major factor for dimmers is misapplication of loads—using line-voltage dimmers for low-voltage loads and vice versa and not using the right dimmer for magnetic and electronic loads.

“Another source of callbacks is the wrong low-voltage dimmer—using an electronic low-voltage dimmer with a magnetic transformer or vice versa,” said Joe Saluta, quality leader, Lutron. “The dimmer may work fine on installation but fail a few months later.”

According to Saluta, of the products that come back to Lutron, about 60 percent are still working, and about 30 percent show evidence of miswiring. Low percentages actually involve product defects. Lutron’s policy is to replace the product even if it was damaged because of miswiring or misapplication.

“Return rates from contractors are much less than through the retail channel, about one-fourth,” Saluta said. “It demonstrates the value of the contractor for these jobs.”

One difference between retail and contractor returns is more contractor returns show evidence that the product (primarily dimmers) was wired under load. “We believe it’s because consumers tend to be very cautious about cutting power before doing electrical work. The evidence suggests some contractors don’t always cut the power to do a simple job, but wiring a dimmer under load can destroy the electronics. Similarly, the hot lead may touch the neutral wire or metal wallbox during installation, resulting in a short circuit,” Saluta said.

Another common cause of callbacks is buzzing from magnetic low-voltage fixtures. A dimmer essentially works by turning the power on and off very rapidly. This can create vibration in the transformer coil. It doesn’t hurt the transformer, but the vibration can make fixture components vibrate, creating a buzz. It’s often most pronounced when the dimmer is around 50 percent. Often there’s a simple fix. Some contractors will loop a cable tie around the vibrating part to keep it secure and eliminate the buzz. To avoid callbacks, as part of the initial service call, contractors should listen closely to the fixture at different dimming levels and make any needed adjustments.

Electrical contractors need to apply best practices with their installations and work with manufacturers to make sure their products provide the right service. After all, outside of product error, there is human error, and to consider all the possibilities for a malfunctioning product, one must consider all the sources.          EC