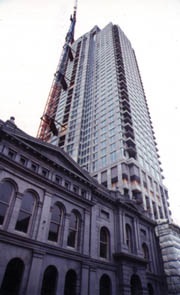 As the first new residential high-rise apartment building constructed in Philadelphia for 15 years, the St. James was designed with the latest high-tech systems. Located at one of the city’s most desirable addresses, the 673,000-square-foot, 45-story tower boasts 307 luxury apartment homes with nine floors of secured parking, a fitness center and a 60-foot-long indoor pool. The existing Philadelphia Savings Fund Society bank building on the ground floor is registered as a historic landmark and is scheduled to be renovated as an upscale restaurant with retail shops and some commercial offices. The apartments themselves feature 9-foot ceilings, floor-to-ceiling windows and private terraces.

The building’s owner, St. James Associates Joint Venture, had a specific vision for the architecture of the building, which was designed in the “Chicago” style and is the only high-rise building in Philadelphia with that type of design. Because of its unique style, the owners chose the Chicago firm of Solomon Cordwell Buenz & Associates Inc. as the architect for the project.

St. James Associates Joint Venture first conceived of the project in 1997, but the housing and office space glut in Philadelphia at that time made construction impractical. By 2000, however, the city’s economy was experiencing a resurgence, and existing buildings were rapidly filling up as people increasingly began moving back into the city.

With the conditions finally right, the owner began searching for a construction manager in 2000. The competitive bid for the project was won by the Philadelphia firm of L.F. Driscoll Co. Philadelphia-based electrical contractor Larry C. McCrae Inc. had provided Driscoll with preconstruction pricing, design and value engineering for both the high- and low-voltage systems of the building for its initial bid. Because of its contributions, its competitive bid, its experience on working on other design-build projects, and its long-standing relationship with Driscoll, McCrae was awarded electrical and structured premise portions of the project.

Although McCrae was designated as the project’s electrical contractor and engineer, the company also included the local firm of RA Tech Engineering on the team. “The goal was to have another company on the team to verify the building’s engineering assumptions and design,” said Joe Morrin, McCrae’s director of operations and sales.

Also joining the team were C-Quest Associates, Simplex Grinnell, Cooper Wiring Devices and the owner’s engineering firm of Alderson Engineering Inc., Southampton, Pa. C-Quest was the project’s structured cabling engineer and was responsible, along with McCrae, for designing the building’s telecommunication, data and cable TV systems. Simplex Grinnell designed the fire alarm system and Cooper Wiring Devices supplied all of the necessary connectivity products for the entire structured premise system, all decorator receptacles and switches, and 50 percent of the lighting fixtures. “We have worked with C-Quest, Simplex Grinnell and Cooper on a number of design-build projects over the years and rely on them for their competitive pricing, high service levels and ability to provide customized solutions that will exactly fit the customer’s needs,” said Larry McCrae, owner and president.

The electrical installation at the St. James was worth about $8.5 million out of a project total of $81 million. Construction activity began in April 2002 and is scheduled to be completed in May 2004. McCrae’s field supervisor Bernie Sheppard was responsible for overseeing an average of 18 electricians and four telecommunication technicians and a peak of 45 electricians when increased staffing was required to remain on schedule.

The company was responsible for installing the power distribution and lighting systems, the mechanical equipment, and the telecommunication, voice/data, cable TV, CCTV, security, fire alarm and access control systems throughout the building.

The power distribution system consists of the local utility’s 13.2kV incoming service, transformers and breaker panels for each unit. The system is submetered so that each tenant pays for the actual electricity used. “We were also responsible for installing the 57 panels required for the building’s lights, elevators and the mechanical and HVAC equipment,” added Jeanette Howell, project manager. The building’s lighting system required the installation of more than 6,300 lighting fixtures of 67 different types for the lobbies and retail, office and apartment units. “The owner decided to use only high-end fixtures throughout the building because they wanted to market the facility as an up-scale residence and the visual appeal of lighting is an important factor to many potential tenants,” said Howell.

Unfortunately, none of the fixtures available from the major manufacturers completely fit the owner’s aesthetic desires. McCrae project engineers and managers examined the owner’s ideas, likes and dislikes, and created unique fixtures that were then manufactured by Zober Industries in Croydon, Pa., which specializes in customized, UL-rated fixtures.

It was decided at the beginning that each apartment would be prewired with a highly sophisticated structured premise system to provide tenants with high-speed Internet access and the greatest flexibility to integrate their phones, cable television, computers and entertainment systems. McCrae installed Category 5E cabling for each apartment, as well as the building’s fiber optic and copper backbones. Each floor has an intermediate distribution frame (IDF) to which the fiber and copper are terminated, and each unit has a Cooper Wiring Systems sub-IDF that allows the tenant to create a true home network. Howell explained, “The sub-IDF unit centralizes all of the voice, data, computer and cable TV cabling in one area. The cables are terminated in jacks in the unit, allowing the tenants to choose whichever Internet service or connectivity they desire.”

The building’s security system is no less state-of-the-art. Nineteen surveillance cameras were installed by McCrae for each parking level, building entrance, the lobby, the elevators and in the ground-level hallways. Once the retail and office spaces on the ground floor are built out, security cameras will be installed there as well. The company also installed about 30 motion and door sensors around the building, as well as the access control system, which includes an intercom system that is connected to the copper backbone of the building’s telephone system, according to Howell.

In addition, the security system has electronic key access devices installed at each entrance for the building and the garage. A proximity sensor for each device reads an electronic code embedded on the tenant’s key fob and opens the door, while logging the tenant’s entry into the building.

The fire alarm system components—1,250 pull stations and smoke detectors, 1,100 evacuation devices such as speakers and strobes, and 150 communication devices—are connected to the main fire control command center, which monitors all alarms through a central station 24 hours a day.

“Of course, time constraints have been an ever-present challenge,” observed Howell. For example, the typical schedule for pouring the concrete for each floor of the building was only four days, which meant that McCrae electricians and technicians had to start working on installing the cabling for each system even as the concrete forms were being framed. “A second shift was established in order to maintain the construction schedule,” she added.

In addition, the original electrical service transformers were laid out by the utility to be installed in the building’s courtyard. “It looked like a switchyard and completely destroyed the aesthetic appeal of the building,” recalled Howell. McCrae’s project team worked with the owner’s structural engineer and architect to redesign the building and create a space that would allow one 13.2kV/480V and two 13.2kV/208V substations to be installed in the basement. The redesign also required the addition of a 13.2kV dual-ended incoming switchgear with metering equipment to feed power to the substations. “The basement, which wasn’t originally designed for the additional high-tension equipment, was attacked by the design team as a retrofit project,” he added.

The success of the project can be attributed to the on-site project managers and engineers were authorized to make the necessary changes to fit the needs of the project as they evolved during construction. “The long-standing relationships between all of the team members provided an atmosphere of cooperative and open communication that enabled us to provide the owner with a state-of-the-art, aesthetically pleasing building,” Morrin concluded. EC