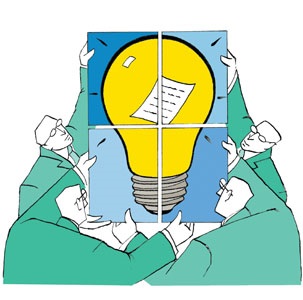 It's not news that our national electrical system is in a squeeze; existing transmission lines are reaching carrying capacity just as a new generation of electronics is driving electricity demand higher. This situation is forcing intense debates among those who argue new power plants and transmission lines are the only solution, and others who believe such approaches only add to today’s environmental problems.

Now a growing middle ground suggests that important energy savings are possible and could reduce, if not eliminate, our need for new generation and transmission resources. Supporters say incorporating 21st century communications and controls systems into aging electrical systems could increase transmission and distribution efficiency and add new demand-side resources during peak-power periods.

This plan is drawing interest from a range of public and private organizations, from the U.S. Green Building Council to electric-utility organizations and new technology-promoting consortia. Our current electrical grid, these groups argue, may have represented the height of 1950s-era technology when it was completed, but by today’s standards, it is pretty darned dumb. Incorporating digital sensors and controllers into transmission and distribution systems, and installing meters that can communicate pricing information to customers will create a “smart grid” that could cut new capacity needs significantly.

In fact, this smarter electrical system could reduce demand by 7 to 11 percent, according to a study by the Brattle Group for the Edison Electric Institute and the Electric Power Research Institute (EPRI). Because much of that demand reduction would occur during peak-use periods, generating-capacity requirements could be cut by 17 to 33 percent.

These efficiency improvements would begin in the transmission system. Replacing 50-year-old, analog switches with state-of-the-art digital models would help reduce energy losses and build new stability into the grid. In addition, these controls would enable existing lines to operate closer to their maximum carrying capacity, which could reduce the need for new transmission-line construction.

Groups involved in boosting transmission lines’ IQs include the GridWise Alliance, a consortium that includes the U.S. Department of Energy and a number of electric-industry stakeholders, and EPRI’s Intelligrid, which is focused on the underlying technical architecture, including the standards and protocols required to ensure interoperability.

The Galvin Initiative, formed in 2005 by Robert W. Galvin, retired CEO and chairman of Motorola, is taking a broader look at the nation’s electric power system, with a goal of creating “perfect power,” the quantity and quality of electricity needed by any given customer at any given time.

Upgrading our aging transmission and distribution systems is a basic first step, according to Galvin Initiative CEO Kurt Yeager. But any plan that stops at the electric meter ignores an important contributor to any successful efficiency-improvement strategies: the end-user.

“Much of the opportunity for performance exists on the consumer side of the meter,” Yeager said.

So the Galvin Initiative is promoting new communications technologies that give consumers more information about, and control over, their electricity use. By incorporating open-protocol communications into new smart meters, utilities can bring the time-of-day rates previously available only to large commercial and industrial customers down to residential consumers. Eventually, refrigerators, air conditioners and other power-guzzling appliances could be equipped with wireless controls connected to the meter. Price-based signals could dial back appliance settings during peak periods, lowering system demands and the need for new peak-generation capacity.

“Typically a refrigerator can go to a lower setting for the 30 minutes of the peak and not change the performance at all, but have a significant impact on the consumer’s bill,” Yeager said.

Chicago’s Commonwealth Edison and PPL in Pennsylvania both have pilot projects underway in which consumers can enroll in time-of-use and real-time use-rate programs. While these efforts don’t incorporate the full Galvin Initiative vision of meters that communicate with appliances, they do enable greater insight into real-time electricity use and access to variable rates based on a consumer’s response to peak-reduction requests.

The full range of smart-grid upgrades could make a big difference to electrical contractors and how they do business as new technologies and pricing plans encourage businesses, developers and homeowners to rethink standard electrical designs. ECs who follow these changes could find new opportunities.

“We want to change some of the building standards to incentivize contractors to apply some of the technologies they know well,” Yeager said. “The savings that accrue are huge to everybody.”