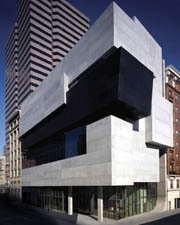 Founded in 1939 in Cincinnati as the Modern Art Society, the Contemporary Arts Center (CAC) was one of the first institutions in the United States dedicated to exhibiting the art of the times. The Center is a noncollecting institution that focuses on new developments in painting, sculpture, photography, architecture and performance art and new media. It was decided in 1998 to construct a new building in the heart of downtown as part of Cincinnati’s $5.4 billion arts and development renaissance plan.

Ground was broken for the new Lois & Richard Rosenthal Center for Contemporary Art in May 2001. Construction for the seven-story, 80,000 square-foot facility was completed in the spring of 2003 at a total cost of $34 million, including land acquisition and endowment. ESI Electrical Contractors began work on the electrical and low-voltage contract in December of 2001 and with an average of eight and a peak of 15 electricians, completed work just 18 months later.

The building is designed to immediately draw in pedestrians and to engage visitors. A suspended mezzanine ramp runs the length of the lobby, which functions as an open, naturally lit, “landscaped” expanse during the day. The ramp runs the entire height of the building, leading visitors to the galleries on each floor. Exhibition spaces vary in size and shape to accommodate the great range of scales and materials used in contemporary art. Views into the galleries are designed to work in conjunction with the zigzagging ramp to create the perception of a jigsaw puzzle. The lower basement level houses a stage area for live performances, including orchestras, bands, plays and performance artists. Elevators are available for both museum visitors and for freight.

Turner Construction Co. released its Request for Proposals (RFPs) in the fall of 2001. ESI learned of the project through various industry publications and decided to capitalize on its high visibility. “We had worked on other projects as part of the city’s redevelopment and knew we could leverage our expertise in completing high-tech, large projects to win the bid and play a larger role in the city’s renaissance,” said ESI President Ron Pennington.

ESI began bid preparations by ordering the drawings and specifications, which were completely designed by the project’s architectural and engineering firms. According to ESI’s project manager, Dan Miller, the designs included all of the specifications and requirements for the power distribution, lighting and dimming systems and the low-voltage sound, security, CCTV, fire alarm and lightning protection systems. The building automation system, however, was included in the HVAC portion of the contract and so could not be bid on by ESI. With drawings in hand, the company determined what was needed to complete all of the traditional electrical and low-voltage systems and then requested RFPs from key suppliers for the products and systems that would meet the specifications. “We chose suppliers for the project based on price, quality, customer service levels and the ability to ensure timely delivery of all necessary components,” Miller said.

ESI submitted its bid to Turner in the fall of 2001 and was awarded the contract shortly thereafter, based on the fact that the company offered the lowest price and has a proven record of completing fast-track projects in uniquely designed buildings. “Other factors, we believe, that led to our winning the award was our 30 year relationship with Turner Construction, our experience with projects with difficult logistics and specialty lighting, our ability to adapt quickly to design changes during construction and our high-quality field personnel and supervisory capabilities,” observed Pennington. After numerous change orders, the final value of the electrical and low-voltage portions of the project was about $2 million.

Power for the museum required two services; one 4,000A electric service and a 2,000A backup system. “Normal service is distributed throughout the building in 27 separate panel boards, two distribution panels and one motor control center,” Miller explained. The backup power system, however, is also connected directly to the utility grid. “Cincinnati is unique in that there are two separate loops operated by the local utility that run through the city. If the main loop experiences an outage, the secondary service takes over automatically,” he added.

Lighting for the museum includes 1,255 surface-mounted, lay-in, can and pendant fixtures, as well as 4,415 linear track and cove lighting fixtures located throughout the galleries. ESI was also responsible for installing the dimming systems for both the main and the theatrical lighting systems. The plan called for the installation of six different dimming panels in various exhibit areas to allow museum curators to dim or brighten light levels according to the needs of each artist.

The general sound system for playing music and making announcements throughout the building required ESI to install 60 separate speakers, which are controlled from a central location. ESI was also responsible for running the cables for all of the speakers, which were then terminated by Cincinnati-based Industrial Communication and Sound at the main control panel.

The security system called for 60 CCTV cameras to be installed throughout the exhibit halls and at the museum’s entrances and exits, as well as for two flat screen monitors and five VHS recorders to be installed at the main security station for observing activities. In addition, door contacts at each exit were installed by ESI. The company’s electricians ran all of the cable for the cameras, monitors, recorders and door contacts, which were then terminated at the security station by Simplex/Grinnell, headquartered in Westminster, Mass.

ESI was also responsible for installing and connecting 485 separate devices for the fire alarm system to the central fire alarm annunciator panel, including pulls stations, horn strobes, smoke and heat detectors and duct smoke detectors. The lightning protection system, however, was subcontracted out to locally based Maxwell Lightning Protection Inc., based on its bid and expertise in installing protection systems. Lightning protection for the museum included installing air terminals on the roof, connecting any metal equipment on the roof to the grounding loop and installing ground conductors throughout the building.

Because the museum takes up the entire site on a very busy downtown corner, the only available place to receive deliveries was on one of two major thoroughfares. “With no room between the museum and the two existing buildings on either side to receive material and no space on-site to store supplies, it was extremely difficult to schedule and manage the deliveries,” recalled Miller. Consequently, the company worked closely with the suppliers’ representatives to have deliveries made on an as-needed basis. Those same deliveries also had to be coordinated with the schedules of the other trades so as not to have too many trucks blocking traffic on the street at any time. To solve that problem, it was agreed to use a scheduling board inside Turner’s construction office, which ensured that the drop-off zone for deliveries would be available as needed. “For products that needed to be lifted to the upper floors, each trade scheduled the use of a buck hoist in conjunction with the delivery of their supplies,” Miller added.

The aggressive construction schedule was another challenging aspect of the project, which was further complicated by the amount of labor-intensive detailed finishing work that the museum required. In order to maintain its schedule, ESI field electricians and project managers had to closely coordinate material shipments, ensure the correct levels of manpower on-site, expedite the great number of change orders and coordinate work with the other trades.

Dealing with the museum’s highly specialized lighting system, which was manufactured in Germany, presented its own set of challenges for completing the project on time, according to Pennington. “In addition to requiring more lead time for scheduling delivery of the lighting system components from overseas, a variety of the necessary connectors, power feeds and elbows associated with the tracks themselves were shipped separately and had to be united on-site with the fixtures, almost like completing a jigsaw puzzle,” he explained. The company relied heavily on its lighting suppliers in the United States to ensure that all of the necessary components would arrive on time.

The challenges presented by the lighting museum’s requirements led ESI to take the unusual step of assigning a dedicated foreman, Teresa Rothwell, to deal solely with the lighting systems. “It’s rare to have a single person to supervise just one aspect of the job, but it got to the point where the general foreman, Mel Wimmer and the foreman, Ken Litschgi, no longer had the time to coordinate deliveries or to work with the finishes and installation,” Miller said.

Using its decades of experience, the dedicated team of ESI office support personnel, project managers and field electricians overcame the project’s architectural and design challenges and provided the CAC and the city of Cincinnati with a completed building that fulfilled all of the architect’s and owner’s visions. EC