The Doctor Is In: Frey Electric Works on University At Buffalo 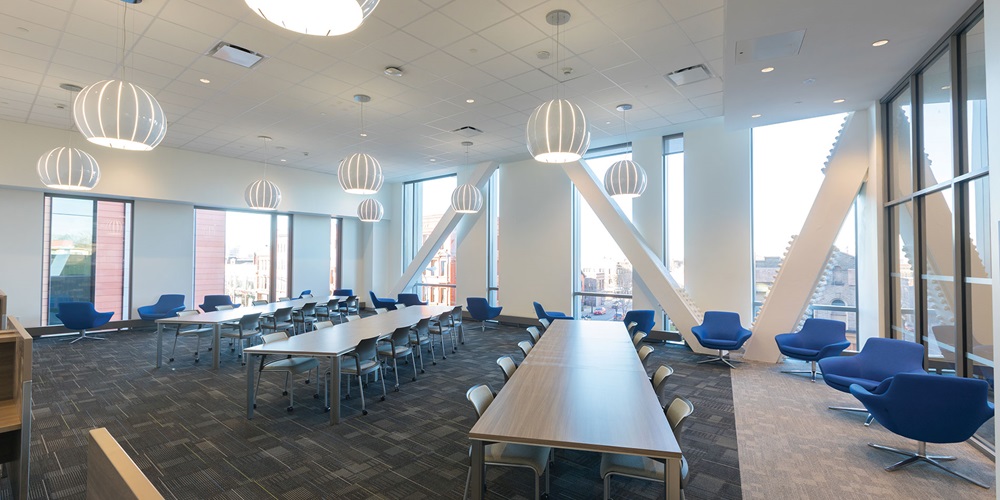 One of the nation’s oldest medical schools has settled into a cutting-edge facility built to keep pace with its rapidly growing population. The University at Buffalo’s (UB) new Jacobs School of Medicine and Biomedical Sciences building is a 628,000-square-foot learning and research facility that includes classrooms, a neuroanatomy museum, an auditorium and laboratories for hands-on learning and patient treatment.

The college’s medical school enrollment has been growing in recent years, and it needed to increase its physical capacity. With the new building, the Jacobs School can expand class sizes by 25%. That additional space will accommodate a student population that is expected to be 720 students by 2021.

The downtown building brings students back to the original Buffalo Niagara Medical Campus, where it was located close to the school’s hospital from 1893 to 1953. The new facility consists of two separate buildings connected by an atrium, all under one roof.

The project was funded to foster Buffalo’s economic growth in part through an NYSUNY 2020 Challenge Grant. The team that designed, planned and built the new structure had a tricky task: construction would take place in a busy urban environment, over an active subway station, with several other projects—a new hospital and parking garage—taking place around it.

Additionally, the building itself would need to have the electrical redundancy to provide the kind of reliable power and lighting required by for hospitals and learning centers, said Jennifer A. Kuhn, P.E., University at Buffalo’s facilities design and construction manager.

Frey Electric was awarded the project contract in October 2014, and its crew was on-site until completion in December 2018, said Chris Bove, Frey Electric’s general foreman. Through the process, Frey Electric worked closely with architect HOK, engineer RGV and the university to design and build a complete system that works for the students and faculty members, now and in the future. Mike Bishop and Jim Chadwick, both senior project managers, worked closely with the team to ensure the project’s success.

But one of the first tasks was the paperwork.

“There was a ton of work to do to get all the proper documents to achieve the certificate of occupancy date,” Bove said.

The building features a variety of specialty lighting for the public, school and laboratory environments.

The main entrance features a 32-foot-tall light tower, which can beam any color. Frey Electric designed, prefabricated and installed the 138 LED color-changing panels, each of which can be removed in the event of a failure. The tower’s computer-controlled lighting can change colors by holiday, but typically shines the school color: UB blue.

In the atrium, there are two different types of lighting. Frey Electric installed floodlights pointing toward the floor, at a height of about 75 feet between the 6th and 7th floor level. Each fixture weighs about 50 pounds and had to be tethered back to the wall.

“They had to be aimed per the lighting consultant’s direction,” Bove said.

To accomplish this, Frey Electric employed a custom-built scaffold system to access the ceiling.

The contractor also installed custom-made indirect lighting that wrapped the atrium. This same lighting was placed in all the offices, corridors and classrooms on all levels, Bove said. Those fixture locations were measured prior to ordering.

On the second floor, the school has preserved some historic features as a nod to the early days of the medical program. The entrance to the atrium is illuminated by 100-year-old gas lights from UB’s original medical school. Frey and UB removed and refurbished each one, which included making molds for some new parts. Instead of gas light, the lamps employ LED bulbs. Due to the weight, Bove said, steel had to be installed behind the drywall with heavy-duty anchor bolts to hold them up.

“It was very nerve-racking, handling such an old meaningful item to the school,” he said.

One key challenge was the immediate proximity to a busy, Niagara Frontier Transportation Authority (NFTA) rapid transit station. Few projects take place directly over an operating subway station, with the need to ensure no power is interrupted at any time.

The electrical challenges when working around the subway station started with the commissioning process, Kuhn said. The team coordinated with the utility, subway operators and construction crew.

“The time frame was expedited and condensed, while still accommodating relay-protection schemes,” she said.

That schedule had to be accepted by the utility, subway and the relay-protection engineers.

“Ordering of the electrical equipment was fast-tracked to meet the construction schedule,” Kuhn said.

When finished, the subway station connects to the atrium where students, faculty members and NFTA riders mingle.

The building comes with extensive electrical redundancy to minimize outages. The main electric service coming into the new building followed a basic hospital setup with 3 to 23 kilovolt (kV) lines coming from the utility—National Grid—and a complex human-machine interface system dashboard to translate data, Bove said. Routing the two 23 kV utility electrical feeders into the building required closely coordinating between Frey Electric and other utilities on the street level.

The team installed the two 23 kV feeders with an autotransfer scheme; in the event one feeder fails, it will automatically transfer to the standby feeder, Kuhn said. In addition, for any generator testing, the team used closed transition transfer switches paralleling the utility and the generator sources so the building does not detect an outage, during generator testing, she said.

The fault current on the 480V switchgear is rated high enough so that the school can close the 480V tie breaker before de-energizing a unit substation transformer.

In the large, first-floor classroom, Frey Electric installed power and data to triangular, movable tables. The entire classroom area sits on a raised floor so UB can change the layout as needed for classes. Frey Electric also provided the in-floor boxes.

The labs in the basement were designed to meet biological safety levels and Animal Biological Safety Level 3, according to strict CDC guidelines. That meant labs had to be smoke-tested for leakage because of risks that could be posed by gases. To accommodate the stringent requirements, Frey Electric installed heavy-duty, cast-iron electrical boxes with extra conductors in case of failure. The lights are also heavy-duty gasketed, and they were sealed to prevent air from flowing outside the space, Bove said.

As another safety measure, the space was constructed of all masonry walls, coated with a special epoxy coating. Crews installed stainless-steel, welded duct work to prevent any bacterial or other biological growth.

The building also includes heavy equipment in both the basement and on the roof. Frey Electric purchased Aerogo pads to move the large equipment in the basement. The generator, at approximately 90,000 pounds, had to be lifted to the roof in pieces, Bove said.

The sixth floor consists of the dean’s suite, administrative area, conference rooms, classrooms and training rooms. On the west side, hands-on laboratory areas include a simulation operating room, patient hospital rooms, exam rooms, nurse stations and a pharmacy. These rooms each come with a B-line system, monitored by cameras and microphones and controlled by the operators so students can simulate a mannequin’s heart attack or other health event. Frey Electric pulled all wire for the camera system.

Frey Electric also installed power and data for the booms and equipment for surgical and robotic suites that may be installed in the future.

Two auditorium-style classrooms feature a tiered seating array. Frey Electric ran power and data under the floor through 2-inch conduits for the data and ¾-inch conduit for the power. Each seat has a data outlet.

No job-site storage for equipment existed during the project. To get equipment on-site, when needed, contractors had one loading dock and two buck hoist temporary elevators to get to the upper floors.

Bove said he’s proud of the work his crew accomplished over the course of the four-year project.

“There was a lot of planning and it was good to have a great office staff [as well as electricians] that all worked together,” he said, adding that all the trades, owner, architect and engineer also worked together as a team. “Now I look back and think how did we do that? You’ll never see another one quite like that again around Buffalo.”