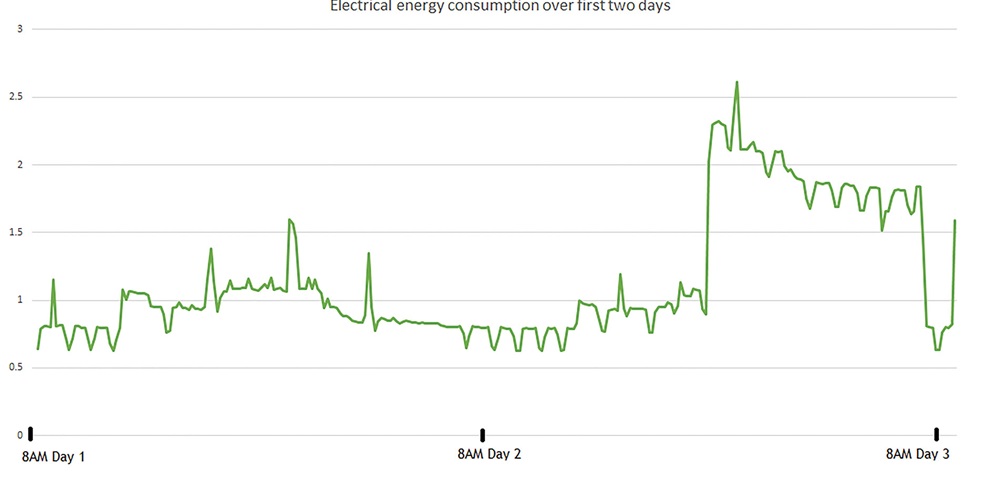 Figure 1 shows a two-day plot, demonstrating the large increase in energy usage of the bedroom A/C units. As one would expect, they start out at a rate of over 2 kilowatt-hours (kWh), then drop down as the rooms and the outside air cool off. During the time when the A/C units aren’t on, there are evident changes in energy usage from events such as the family making coffee and preparing meals with the microwave and other appliances, though not nearly as large a change as those caused by the A/C. Also interesting is a pattern where the usage dips down periodically during lower usage time periods. Since this is combined power usage from both phases, we need more detail to see what’s causing that.

That’s where Figure 2 comes in. This shows the current of Phase A and Phase B zoomed in to a finer timescale resolution. Phase A has a load with a distinct, repetitive pattern every 75 minutes (50 on, 25 off), with a current change of 0.7A. Phase B has an even more pronounced pattern with a faster cycle time of 36 minutes (24 on, 12 off) and a larger current change (1.2A). These were traced to two refrigerators, the lower rate of consumption by a significantly newer refrigerator in the kitchen, and the higher rate by an older one in the basement.

It might be advisable to replace the old fridge, which uses nearly twice the energy when the compressor kicks on. Simple math shows that the older unit costs the homeowner about $0.41 a day. However, the return on investment (ROI) for a comparable new fridge is more than five years, taking it off the list of culprits for now. Likewise for the coffee pot ($0.12 per day) and the microwave (less than $0.10 per day). Electronic loads such as TVs and computers that are “off” but plugged in still use electricity, which was visible when the homeowner was away for three days. Subtracting the contribution of the refrigerators leaves about a 0.25 kWh rate of consumption, or about $1 per day, a very small percentage of the $150 monthly bill.

The way to improve the bottom line is to use the 80/20 Pareto Principle. In this case, the 20% causing the 80% is the window A/C units. Replacing the largest A/C unit, or all three, has the best payback, since the outside air temperature can’t be controlled. While replacing the larger unit will benefit the homeowner with lower bills in the summer, there was a need to see if additional savings could be found by looking deeper into the daily energy patterns. In this case, replacing the appliances does not seem to be cost-effective. However, recessed lights in the kitchen could be converted to LEDs. The pump for the old furnace/boiler in the winter might also be a candidate, but replacing the entire furnace with a more energy-efficient unit would provide an even larger savings with a shorter ROI. However, the significant upfront expense requires a separate study.

For those wondering, installing a new, whole-house HVAC system was explored. However, we estimated its cost at more than $18,000, which probably wouldn’t do much to reduce the electric bill since this homeowner normally uses the A/C units to sleep soundly only when it is really
hot outside.