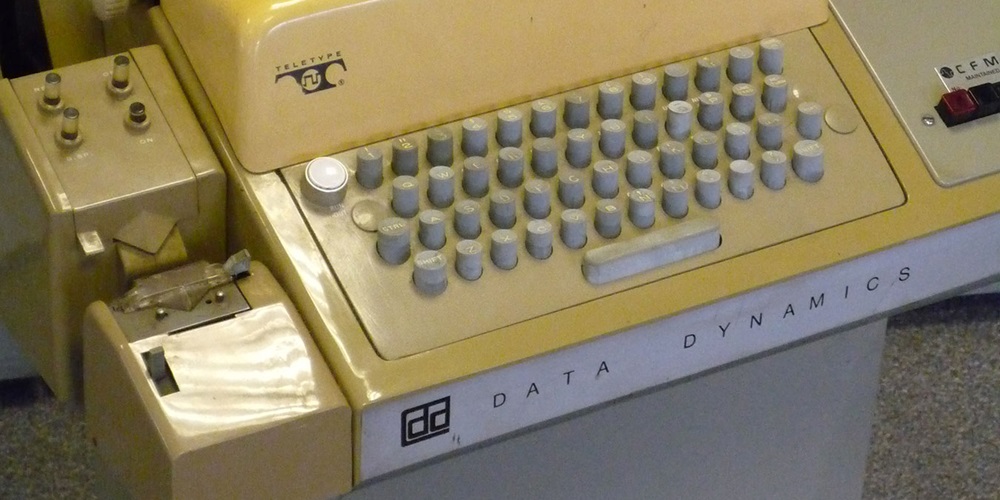 The company I worked at while being trained as an electrical estimator already had an estimating system: a mainframe computer system called Estimatic. We had to convert each takeoff item and assembly into a 10-digit code. We entered the codes and quantities into a teletype machine. (For those of you not blessed with the wisdom of age—yes, that means I’m old—note the sample image shown here).

As we entered the codes, it created a paper tape. When we finished the typing, the tape was fed back into the machine, which then transmitted the information to a mainframe computer in Denver. The mainframe created a price sheet, complete with costs and labor, which was then transmitted back to our teletype machine. After setting the teletype to receive, the machine created another paper tape. After setting the machine to the typing mode, the new tape was fed into it, and it printed the completed pricing sheets on standard tractor feed paper.

While the foregoing was somewhat of a pain, my next job was worse. They had no estimating software at all. I had to go backward and prepare estimates by hand. It was horrible! I actually had to break down the assemblies myself and list the material on a pricing sheet. Then, I had to copy the material pricing from the Trade Service Publications price book. Next, the boss would add the labor units and give the sheets back to me to do the math on a paper-tape calculator.

The whole thing was archaic! Well, maybe not so much, as this was a time when most estimators prepared their projects by hand. However, having started out using a computerized estimating system, I was spoiled. I hated manual estimating. Maybe that’s too strong, but let’s just say I did not like doing things by hand because it took so long.

Then, it happened! The boss made an appointment with a software company. The owner himself came into the office to demonstrate his personal computer-based estimating system. There was no shopping. No talking to a dozen salesmen. Just one demonstration, an immediate sale, and I was in estimating heaven. The hours-long takeoff-breakdown process was reduced to just waiting for the printer. I had more time to analyze the estimates, and my win rate increased. It also freed up time to complete more estimates.

Moving on to my next job, my first assignment was to shop for a new estimating software system. By this time, there were a large number of systems to choose from. At first, I was overwhelmed. There were so many choices, so many claims, and so many features. I even had to deal with my preference for the software I had been using before. In the meantime, there had also been a shake-up in the world of personal computers with the introduction of the IBM version. Everyone was making software for the new computer, so I also had to choose a hardware platform.

Fortunately, a friend showed me how to create a decision matrix. I had each salesman come in and give me an extensive demonstration. I then created a list of features and a column for each software package, then gave each feature a grade from zero to 10. Finally, each feature was given an importance factor. If it was a very important feature, it would be multiplied by a high factor, such as 150 percent. If I did not care about the feature, it would be multiplied by a low factor, such as 50 percent. The decision matrix system actually worked. By the time I finished the matrix, I was completely sure which program I wanted, and it turned out to be a decision I did not regret.

At my next job, I did not do so well. I went through the same process and developed my decision matrix. However, I did not go with the results the matrix recommended and made a decision based on money. The makers of the software my company used at that time offered a free upgrade to a new version based on the latest machine from IBM, the PC XT. I thought the right decision for the company would be to save the money, but I was wrong. The software did a good job on the estimates, but it was troublesome. There were many glitches, crashes and data losses. The matrix had told me not to go with new untested software, and I did not listen. The next time I had the opportunity to choose new software, I paid attention.