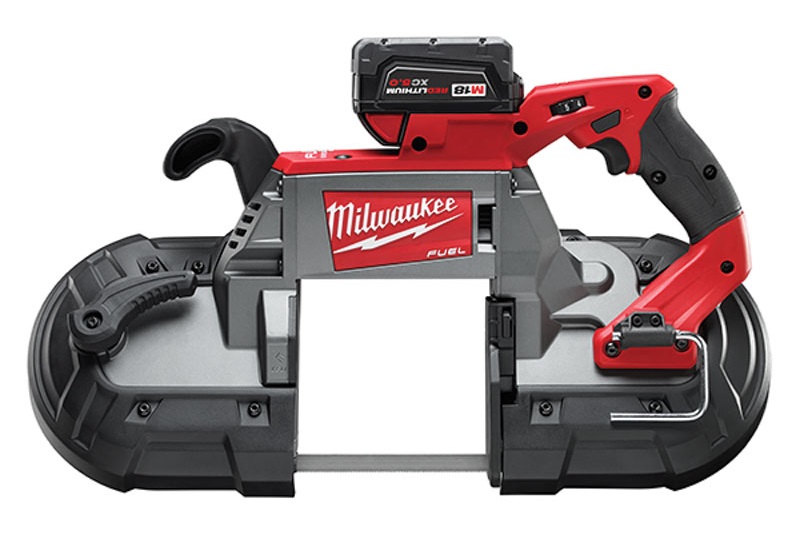 Saws often are needed for electrical work, and the cordless saw models available today are more powerful, smaller, lighter and easier to use compared with older models.

Basic power saws for electricians include reciprocating saws, metal-cutting circular saws and compact, lightweight band saws. While the evolution of the lithium-ion batteries can be credited for the striking changes in saws and other handheld power tools, manufacturers have taken advantage of that technology to improve tool performance and ease of use.

Lithium-ion basically has replaced nickel-cadmium (NiCad) platforms. The power of today’s cordless tools often matches or exceeds corded versions, which are useful for work requiring multiple cuts during the course of a workday. Not all lithium-ion batteries are the same; manufacturers aggressively promote the benefits their brands of lithium-ion batteries provide.

“Performance, as well as durability and ergonomics, remain driving forces in the development of cordless saws,” said Andrew Plowman, director of product marketing for Milwaukee Tool, Brookfield, Wis. “We now are able to design compact cordless saws that provide not only greater power, but they also are very maneuverable and can withstand the harsh conditions on the job.

“Along with advancements in motor technology and electronics, lithium-ion has allowed manufacturers to pack a massive amount of power and performance into a compact structure. Saws and other tools are getting smaller and lighter and, at the same time, outperforming their predecessors. A 12V [volt] band saw, which weighs 6.75 pounds and is 12 inches long, is ideal for one-hand cutting applications,” he said.

Plowman described some of the cordless saws used by electricians.

Band saws are used for cutting electrical metallic tubing (EMT), threaded rod, conduit and Unistrut when installing electrical systems. They are a good choice for making cuts overhead, flush to a wall, or in a vice.

Metal-cutting circular saws are suitable for a wide range of demanding cutting applications, from sheet metal to plate steel and everything in between. This versatility makes circular saws useful on an array of job sites. Its ability to make cold cuts means the user can work with the material immediately after a cut is made.

With reciprocating saws, it is easier to make cuts in tight spaces in between other materials. They are an option for cutting EMT, threaded rod, nonmetallic conduit, metal studs and Unistrut.

Plowman said new battery technology exceeds what is possible on high-voltage or multibattery tools. It is challenging conventional wisdom about the types of products that can be viable cordless solutions.

“Advancements in technology also have allowed tools to become smarter,” he said. “With our One-Key app and a compatible Milwaukee 18V Fuel reciprocating saw, users can remotely adjust settings on a smartphone, including speed, engage an automatic brake, and optimize settings for longer blade life. This gives electricians ultimate control to specifically set or adjust the speed beyond the variable-speed trigger and prevent blade chatter when starting cuts in EMT and Unistrut.”

“The real change in these products is the increase in the number of cordless options,” Stevens said. “New cordless tools bring greater power along with the versatility to work without the tether of a cord.

“On the accessories side, new materials, shapes and sizes ensure users can drill or cut through more materials than ever before. Users won’t see a great deal of difference in power compared to corded tools, but, in terms of the mobility afforded by cordless tools, there’s a contrast. Additionally, especially for professionals like electricians, newer power tools offer features like soft-start that provide greater control and precision and speed control. Lights now found on many power tools allow users to access hard-to-reach locations,” he said.

“The requirements for dust control cannot be overstated,” he said. “Look for dust-control options that provide an integrated system approach, including proper attachments and connections, while offering high [cubic feet per minute] air velocity and [high-efficiency particulate arrestance] filters.”

“New motor and battery technology is providing reciprocating saws with corded performance, without the cord,” he said. “These saws are especially useful for cutting and demolition in hard-to-reach spaces. We offer a reciprocating saw powered by two 18V lithium-ion batteries for maximum power and run-time. It also has a new vertical crank mechanism providing a longer, 1¼-inch stroke.

“Ergonomics improvements make these saws more comfortable to use, and the four-position, keyless blade clamps for easy blade changes and to make a variety of cuts in different directions, including flush cutting,” he said.

When choosing between cordless or corded band saws, cordless is preferred.

“Battery technology is making cordless reciprocating saws equivalent to, and in some cases better than, corded models,” Bolton said. “Cordless is more convenient for metal-cutting circular saws, but when high power is demanded, users turn to corded tools. Chop saws and multicutters remain corded with no cordless models available.”

“Beyond five years ago, the reciprocating saw was the only one available with a battery, and commercial contractors were largely dissatisfied with their run-time on a single battery charge; therefore, many professional users did not consider them acceptable,” he said. “The advancement of lithium-ion batteries and more efficient motors have enabled manufacturers to not only offer commercially accepted reciprocating saws but also to expand their cutting tools into metal-cutting circular saws and band saws.

“In addition to extended run-time, new categories, such as the metal circular saw, have offered safer alternatives to metal cutting by minimizing sparks and not heating up the base material like abrasive cuts of the past tended to do. Finally, cutting speed has increased with each generation of saw that comes out due to various motor and electronic advancements,” Brading said.

Regarding cordless versus corded options, some users believe they require corded saws for their applications.

“However, typically it is because they have not used the latest generations of cordless tools from high-grade manufacturers,” Brading said. “Once they do, they tend to recognize the power and convenience of being cordless and drop the corded tools for good.”