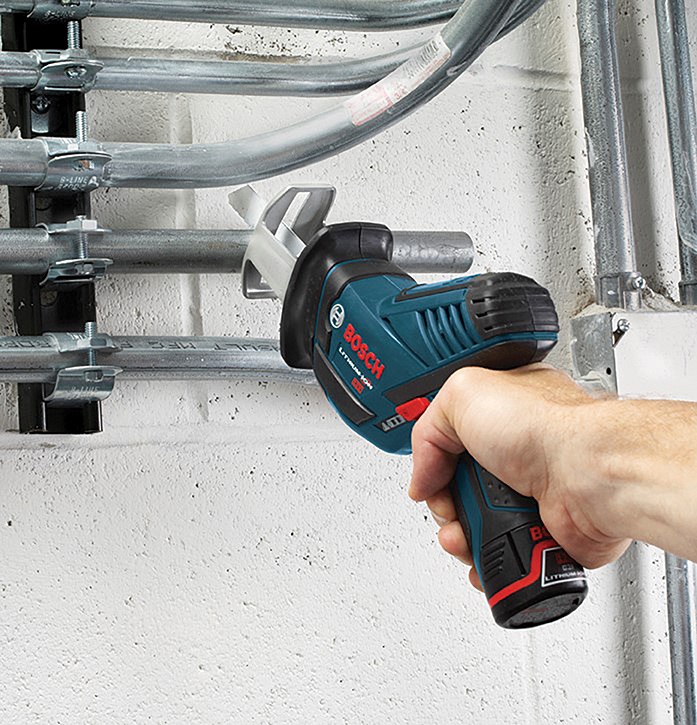 Construction in most trades uses saws to cut off and cut through various materials, and electrical work is no exception. Cordless saws continue to capture a growing share of the market, though there still are applications where corded saws are preferred. In some situations, a manual handsaw is the best choice.

As with other power tools, the lithium-­ion battery is a primary driver in demand for cordless saws. It packs more power in a smaller package, enabling manufacturers to design smaller, lighter and more ergonomic hand tools.

“There is a clear trend in the industry to go completely cordless,” he said. “That is especially so for electrical contractors who need the ability to work nearly anywhere, often in areas where there is no power. As we see cordless continue to mature, we anticipate a transition from corded to cordless as the primary power source.”

Rose classifies the 18V reciprocating saw as the electricians’ “go-to” saw designed to cut through most anything. When clean cuts are essential, he recommends 18V band saws and 18V metal circular saws, optimal for cutting conduit where a burr could tear wire sheathing. A “one-hand” 12V pocket reciprocating saw is useful for pipe cutoffs and other quick-cut jobs.

Each product offers a solution for the different cutting applications an electrician may encounter on a job site, and each can be fitted with the blade appropriate for each application.

All are available in cordless, lithium-ion-powered models.

“With increased power and longer run time, lithium-ion power allows users to work effectively on any job site without being required to have a power source nearby,” Rose said. “In the past four years, we have seen quick advancements from 3.0 Ah [ampere-hour] batteries to 5.0 Ah packs today, with 6.0 Ah packs coming in the near future. This means bigger ‘gas tanks,’ more run time and the ability to cut the cord completely.

“In addition to bigger gas tanks, the latest battery cells offer more power than the original lithium-ion generation. These cells have less resistance, which means energy travels more efficiently from the battery to the tool for better, faster performance. Reciprocating saws and others have more energy at their disposal and can be more efficient in how they use it for less bogging down and better overall performance.”

However, Rose said, despite batteries having larger capacities, the packs themselves are not larger. Lighter tool weights make working overhead more comfortable and well-suited for various environments. More efficient and powerful motors are also possible, as cordless batteries now have a larger power supply to support such performance all day.

Rose said the most common application for corded saws usually is around on-site “cut stations” located near a power source, often using band saws. At such an area, there is either an exceptional amount of gang-cutting that would quickly drain a battery, or users simply don’t want to manage battery charging because power is readily available.

“Because of this, cordless is taking over many of the applications and filling the needs formerly provided by corded tools,” he said. “The corded-to-cordless transition has gained momentum off the technological benefits of lithium and will continue to do so as technology improves.”

Many of the lithium-ion powered saws perform comparably to the corded versions for a variety of applications, particularly for jig saws, oscillating saws, and some reciprocating saws, Ducker said.

“More and more, the decision is being driven by the length of time the application is being performed instead of the power required, making run time the key tipping point in choosing between a cordless or corded tool,” he said.

For high power-draw applications done continuously over long periods, users often will use corded tools to avoid having to swap out batteries more frequently, Ducker said.

“Lithium-ion saws are impacting sales of corded saws in some categories more than others,” Ducker said. “Even so, we are seeing an overall growth in sales for almost all areas of the corded and cordless saw markets.”

“We now are able to design compact saws that provide not only great power, but they’re also very easily maneuverable and can withstand the harsh job-site conditions,” Coulis said. “Saws continue to become smaller and lighter, while also providing more power and run time to the user. And, as overall performance continues to improve, most manufacturers are now only making lithium-ion cordless products.

“Lithium-ion is allowing us to do a variety of innovative things in the ­cordless-saw category. [It] allows us to increase the performance and capabilities of traditional cordless saws, such as reciprocating saws and metal cutting circular saws, while also reducing their weight. Lithium-ion, along with advancements in motor technology and electronics, allows manufacturers to pack a massive amount of power and performance into a compact structure. Tools are getting smaller and lighter and, at the same time, outperforming their predecessors.”

There are distinct applications and uses for both corded and cordless tools, Coulis said.

“Although we’ve seen large growth in the shift from corded to cordless saws as more users begin to realize the benefits,” he said, “there still is a place in the market for corded saws. It simply depends upon users’ needs. Users most often choose corded tools for heavier applications with long-duty cycles. Other factors that influence the choice of corded tools include size, weight and cost.”

Dave Mueller, Klein Tools senior product manager, said a variety of manual handsaws provide the same convenience of a cordless power saw when no power is present, plus they provide the user greater control over the cutting

“A handsaw gives the user more precise control over specific cutting needs, where a power saw may not be able to be adjusted for speed, angles and vibration,” Mueller said. “Other benefits are the lightweight portability and maneuverability of a small tool when the work area is constricted or cutting area is tight. Other factors that favor handsaws are initial tool cost and low noise. And lastly, when the job itself does not justify the time and effort to pull out the power saw—that is, when convenience is more important than speed.”

Manual handsaws have changed and improved over the past few years, Mueller said. Tool shapes now provide an optimal grip size for the average user’s hand. Today’s handsaws also are lighter and easier to carry.

Bobby Shaw, Milwaukee Tool director of product management, said there are several situations where a user would elect to use a manual handsaw over a power tool.

“For example, manual saws can often be more maneuverable—reaching tight spaces where a power tool might not be able to reach,” Shaw said. “In environments with noise concerns, handsaws can operate quietly and cause less distractions. Handsaws can also be conveniently carried on a tool belt.”

“Typically, the blade will be dictated by the type of work,” Shaw said. “A folding utility saw and compact hacksaw designs make the tools compatible with a variety of blade patterns, allowing the user to adjust the tool to application and be quickly and easily changed or replaced for application-specific work to enable the user to maximize performance.

Each type of saw uses blades specifically designed for it, offering a wide selection for cutting different types of material. Matching blade to material is critical for maximum cutting effectiveness. Next month’s column will focus on saw blades and other cutting accessories.