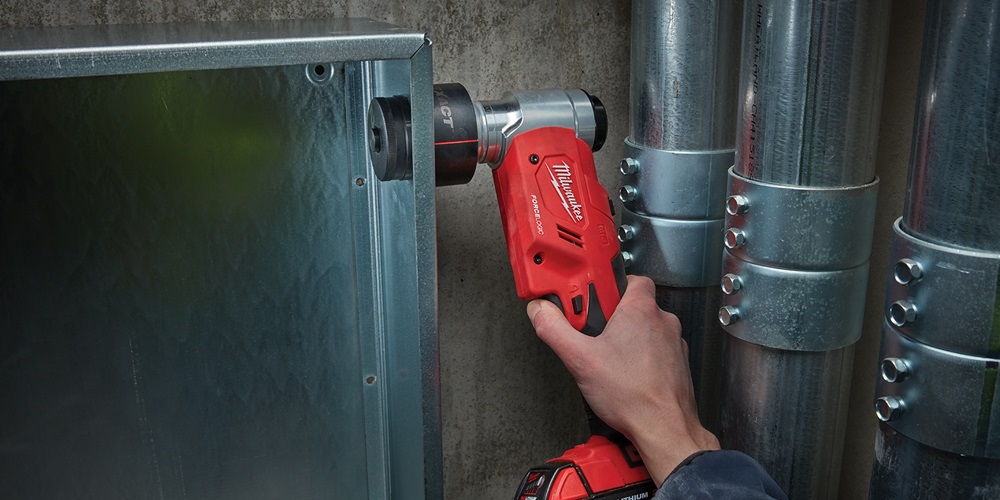 Once, this task was performed by drilling a small hole and reaming it to the required size. Electricians used step bits, metal-cutting hole saws and chisels. The beginning of the end of those days came in 1928, when Greenlee introduced a line of knockout tools. So, knockout tools have been available long before today’s electricians were even apprentices.

Basic components of a knockout tool include a punch and die, draw stud and device to pull the stud, ranging today from hand-operated ratchet wrenches to hand-powered hydraulic pumps and ­battery-powered hydraulics. Tools are rated for use in mild steel or stainless steel, and many also may be used to punch holes in aluminum, fiberglass and plastic. Standard knockout punch hole sizes range from ½ to 6 inches in diameter.

Improvements through evolution can be a slow process, but several of the most significant advances in knockout tools are recent developments.
In May 2017, Milwaukee Tool introduced Exact Rapid Reset Draw Studs for use with its established lithium-ion-­powered M18 Force Logic knockout system.

“Rapid Reset Draw Studs simplify the process of punching repetitive holes by eliminating the need to thread and unthread punches between holes,” said Paige Bovard, group product manager, Milwaukee Tool, Brookfield, Wis. “The Force Logic system speeds the knockout process by allowing punches and dies to be quickly aligned on the work surface without the weight of the tool. The user then snaps the tool onto the punch-and-die assembly and pulls the trigger to punch the hole.”

L.H. Dottie, Los Angeles, offers two 12-ton hydraulic hole-punch kits and a die set. Punch kits have a compact yet extremely powerful punch pump with a 360-degree, fully articulating head, which enables users to punch holes from any position. Innovative three-point dies ensure a clean cut every time, even on 10-gauge stainless steel. Each kit is packed in an ultra-heavy-duty carrying case with industrial-strength latches. The compact aluminum pump has a cushioned handle, and one tool accommodates a wide range of dies.

The HPTK1 set contains 13 pieces, and the HPTK2 has 16 pieces. Dies are available in a variety of sizes rated to punch 10-gauge stainless steel. According to L.H. Dottie, the die design provides maximum performance with minimal pressure and 50 percent less torque than other tools. To prevent slugs from binding, Dottie’s die sets have three cutting points.

“The 11-ton battery/hydraulic Intelli-Punch tool has patent-pending Auto-Retract technology that senses pressure that accurately detects the completion of a punch and automatically retracts the ram, preventing damage to punch parts,” he said. “It has a maximum cycle time of eight seconds.”
In 2017, Greenlee added laser markings to all of its conduit-sized knockout punches, dies and draw studs, making it easier for users to accurately align the die with the punch. Obviously, Greenlee’s 1928 introduction of the knockout tool paved the way electricians do an important, frequently needed task.

Today, separate knockout punch types are available for up to 10-gauge mild steel and stainless steel.

Standard knockout punches are designed for mild steel and also can punch a few holes in stainless steel but should not be expected to last nearly as long as punches designed specifically for stainless steel. Either type of punch also is capable of punching less common materials such as aluminum, plastic or fiberglass.”

“When preparing a cabinet for knockouts, the user begins by drawing crosshairs on the material surface, long enough to extend the markings beyond the die radius,” Bentley said. “When setting up the knockout punch assembly, the user lines up the die’s alignment markings with the crosshairs, ensuring the finished hole is accurately positioned. Once the punch and die are tightened to the material, the tool is held in place to make the punch.”
Bentley suggests several important considerations before purchasing knockout tools or kits.

Tool capacity: A knockout tool should be sized according to the largest size of hole being punched, the type of material, and the maximum thickness of the material being punched.

Swivel head: A knockout driver that has a 360-degree rotating cylinder allows easier setup and provides a better working posture, which reduces the physical exertion required when using a tool with a fixed head.

Bovard said that while hole saws, carbide cutters, and step bits can also make holes in metal, knockouts are the most accurate way to make precision holes in metal enclosures.

“The holes need to be precise so that the conduit aligns perfectly,” she said. “When upgrading a panel, knockouts are the best option because they produce the most accurate hole. Hole saws or step bits may ‘walk,’ when starting the hole. The invention of the knockout tool allowed the user to be much more accurate and precise with a much more durable tool.”

For Milwaukee, a major milestone in knockout tool evolution was the introduction of the M18 Force Logic 6T knockout tool.

“While our original 10T tool gave a wide range of commercial and industrial users the speed, hole quality and capacity they needed,” Bovard said, “it became increasingly important to provide an optimized compact solution for the breadth of applications that service and MRO professionals deal with, which require maneuverability. The 6T knockout is 40 percent lighter than the 10T, providing users with a reliable tool that they can easily navigate within tight spaces and deliver the capacity to punch up to 4-inch holes in 14-gauge mild steel.”

Historically, the most challenging step in the hole-making process is setting up the punches and dies on the material.

“Alignment lines can be very hard to see, and the weight of the tool that is attached to them can make it difficult for users as they try to make the alignment,” Bovard said. “While all dies have some sort of alignment mechanism like a small hash mark on the side, Milwaukee’s Exact punches and dies feature bold, red crosshairs to make alignment fast and easy. And, now, with the Rapid Reset Draw Stud, users can easily and quickly reset for the next punch. This draw stud creates the fastest and easiest resets between new punches. Users simply need to release the die from the draw stud, slide it off, align the new die, lock the draw stud, and they’re ready for the next punch.”

To make a punch, the user tightens the punches and dies on the material, and then the pulling mechanism pulls straight up and down to make the punch.

Bovard said several questions should be addressed when analyzing knockout tools: What is its capacity? Can it punch all sizes that are needed? Can the tool punch all the materials that will be encountered? Some tools are rated for mild steel, stainless steel or both. Many manufacturers also require that separate punches and dies be purchased for each material, and that can result in buying duplicate inventory. What is tool weight, the method of alignment, ease of use and alignment and use, and other ergonomic factors? Is the knockout system compatible with batteries used on other power tools that are in use?